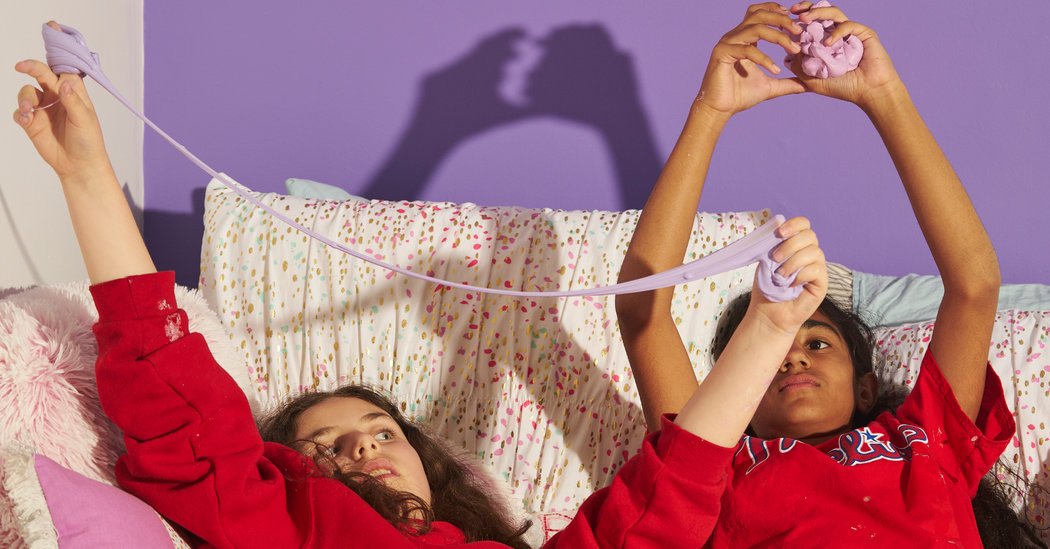 The internet has become synonymous with stress itself. Is slime, that substance between liquid and solid, an antidote?

Photographs and Video by Yael Malka 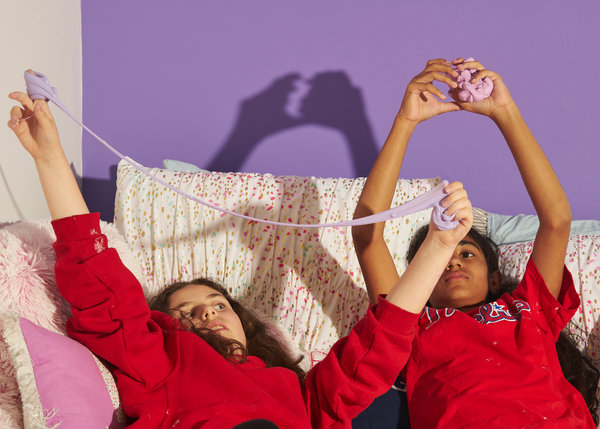 One of the internet’s greatest features is satisfaction on demand. Dial up a video tagged “satisfying” and conjure a mesmerizing sensation from your screen. Beautiful bars of soap cut into ribbons, fresh dough squeezed through a pasta maker, icing piped onto a cookie, a spider weaving its web — they scratch some kind of mental itch. The content seems to bypass the brain to access our bodies directly. And satisfaction incarnate is slime, that substance suspended at the boundaries between liquid and solid, and the onscreen and the physical.

First popularized by Instagram users in Thailand and Indonesia, slime content has invaded the satisfaction internet and oozed into the American middle school. Slime is an art form, a community and an industry: sensory gratification tubbed and sold. From mundane household materials — laundry detergent, glitter, glue — springs an exotic material.

Though this bright, pliant blob is a natural star of the visual internet, it longs to be touched, stretched, bounced, squeezed and swirled. It can be soft and fluffy, milky and glossy, smooth and buttery, or thick and crunchy. Twist and fold slime in the right way and it will sigh pleasantly — in the form of bubble pops, kisses or a squishy clicking noise that slimers have termed the “thwock.” Slime is a courier for smells, too. The most beguiling specimens are scented like sweet fruits and flowers.

The only sense slime does not activate is taste. Instead, it offers the idea of food. Slimes have always drawn visual connections to cotton candy and soft-serve, but lately they have been more explicitly styled like desserts. Chloe Park, the 32-year-old slimer behind the artful outfit Slime New York, says that her all-time best-selling slime is Cotton Candy Squish, a soft, thick, pink-and-blue concoction that sells for $8 per 3-ounce tub.

Since then, Park has created slimes that look like mocktails, icees, marshmallow, ice cream and meringue. Her Mint Choco Chip Ice Cream slime doesn’t feel like real ice cream so much as it feels like “the idea of touching it without it melting away in your hands,” she says.

Park started making slime several years ago after dipping into the satisfaction internet, seeing slime videos on Instagram and thinking, “I want to touch it so bad.” Back then the internet was not crawling with shops and do-it-yourself tutorials, as it is now, so she experimented in making her own. At first she was disappointed — her attempts were too hard, too flubby, too watery or sticky — but now she is among the internet’s most skilled slimers. Park ships 400 to 500 tubs of slime a week out of her one-bedroom apartment in Weehawken, N.J. Her husband quit his job to help her slime full-time. Park’s parents are supported by the enterprise.

In the converted bedroom — their bed sits in the living room — Park mixes huge batches of slime bases in a commercial-grade standing mixer. Her husband Sungyeop Jo is, among other things, the muscle of the outfit; the large batches require significant upper-body strength. The bases will keep for about two days before they begin to de-slime. Park separates the bases into smaller tubs and fine-tunes each with its own sublime texture, soothing pastel dye, and mixed-in miniature charms shaped like coffee beans, sprinkles, tiny whales or unicorn horns. She adds essential oils, too. The scent is “very important,” Park said. If it doesn’t meld with the visual impression, “It can throw the whole slime off.”

When a batch is finished, Park posts the results to Instagram. The slimes are filmed on professional cameras, recorded with a microphone favored by ASMR practitioners, and manipulated into pleasing shapes by Park’s hands, which operate with the care of a pastry chef or a masseuse, and are always freshly manicured. “It’s part of the job,” she said. During a recent visit, they were painted a subtly purple gloss, matching an iridescent lavender slime she had just cooked up.

Though slime can be a lucrative business, it is also a site of pure play. It has bloomed into a symbol of modern childhood, and in particular, girlhood. Park has fans of all ages, but her core audience is elementary and middle-school kids, many of whom are drawn to slime for its relaxing properties. Perhaps slime’s mock-dessert qualities are particularly appealing to children, who are constantly confronted with desserts they usually can’t eat and definitely can’t hold in their hands. Slime offers the experience of being able to play with your food — to squeeze a perfect soft-serve swirl of ice cream in your fist and then twist it back into shape.

For Anaiya Shirodkar and Lily Lokoff, two rising sixth-grade girls in Philadelphia who mix up batches of the stuff in their parents’ kitchens as a hobby, slime represents the collision of classic D.I.Y. creativity and YouTube-molded kid culture. Algorithms serve up videos that offer new slime recipes to try and games to play. Those can take the form of recreations of filmed YouTuber “challenges,” like, try to make slime with a blindfold over your eyes.

Slime is inspired by screen images, but it is also an escape from them — you can’t be glued to your phone when your hands are covered in glue. And it is representative of the internet’s tendency to push even the purest of activities into a market. Lily’s school cracked down on the slime trade after it caused too much drama; Anaiya and Lily sold tubs on the sidewalk after a sleepover. As the Atlantic writer Taylor Lorenz put it, “slime shop is the new lemonade stand.”

But it also just feels good. When I asked Anaiya and Lily how they would describe the sensation of slime, both replied: “Satisfying.”

It is probably not a coincidence that slime has risen just as we have come to define ourselves by our anxieties, our food issues, and our efforts to fend it all off with practices of self-care. The internet can replicate and exacerbate these stressors, but slime can work in the opposite way, as a kind of timeline cleanse. The word “satisfy” comes from the Old French satisfaire, which meant to repay or make reparations. Perhaps that is what slime is: the internet’s atonement for everything else.

Yael Malka is a Brooklyn-based photographer.

Surfacing is a weekly column that explores the intersection of art and life, produced by Alicia DeSantis, Jolie Ruben and Josephine Sedgwick.

Amanda Hess is a critic at large. She writes about internet culture for the Arts section and contributes regularly to The New York Times Magazine. @amandahess • Facebook

'The Young and the Restless': Are Jack Abbott and Sally Spectra in Love?

The 7 most important revelations from Meghan’s Oprah interview

Salomon Advanced Silhouettes Get Stripped Back for SS21 "Black Edition"

What time does B&Q open today?