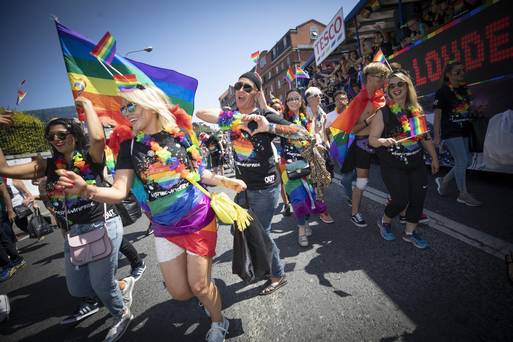 Organisers have promised that this year’s Dublin Pride parade will be the biggest and best yet, but some in the LGBTQ community complain of growing commercialism and establishment involvement

Why does Dublin seem to be covered in rainbows right now?

This week the city is celebrating Pride, an annual festival to honour our LGBTQ (Lesbian, Gay, Bisexual, Transgender, Queer or Questioning) community. An Post has painted letter boxes in Pride’s rainbow colours, the Aviva Stadium is being lit up at night and even St James’s Gate at the Guinness Storehouse has dropped its black facade for the first time.

It all culminates in a parade through Dublin city centre tomorrow, which organ isers hope will top the record attendance of 60,000 set last year.

Is there anything different about this year’s event?

A number of Irish institutions are making their debut appearances. These include the GAA and Macra na Feirme, a clear sign that it’s gradually becoming easier to come out as gay in rural Ireland.

READ MORE: Pride Festival 2019: ‘You only have one life, don’t live a lie’ – young farmers on changing times for gay people in rural Ireland

Perhaps most significantly, An Garda Siochana has changed its policy and allowed members of the force to take part while wearing their uniforms. In the words of Commissioner Drew Harris, it’s all about “reflecting the diverse society we serve”.

READ MORE:
On parade: Garda group will march with Pride

Pride seems to have become universally popular, then?

In short, they think it’s being exploited by companies that see the gay community as just another marketing demographic – sometimes nicknamed ‘the pink pound’.

“When I’m taking part in Dublin Pride these days, I feel like I’m Dr Frankenstein chasing his monster,” says Izzy O’Rourke, one of the event’s original founders.

“Today’s celebration has become a cheap opportunity for businesses to promote themselves and for state bodies to give an appearance of inclusivity without having to do anything very substantial.”

Is the LGBTQ community in danger of splitting?

To some extent, it already has. An organisation called Queer Action Ireland is holding an alternative parade tomorrow because it believes the presence of gardai goes against Pride’s anti-establishment principles.

“Cops marching in Pride is not a sign of progress,” QAI warned in a recent statement, “but rather a representation of the further co-optation of our struggle.”

QAI also objects to RTE becoming Pride’s media partner, claiming it has “welcomed transphobic hate speech on to the air”.

How long has Dublin Pride been going?

Although the international Pride movement began as a response to New York’s famous Stonewall riots 50 years ago, its history in Ireland is a bit more recent.

In 1982, a 31-year-old airport worker called Declan Flynn was beaten to death by self-styled “queer-bashers” in Fairview Park.

A few months later, the gang who killed him walked free on suspended manslaughter charges, prompting around 1,000 people to march in protest from Liberty Hall to the site of Flynn’s death.

This led to the first Dublin Pride parade in June 1983, though several more years passed before it became an annual event.

Is ‘Official Ireland’ looking to make up for the sins of its past?

You get that sense all right. The Pride flag will fly tomorrow over Leinster House, where TDs and senators have just set up their own LGBTQ group.

Last Monday, it was announced that the National Museum has bought a mauve dress worn by Panti Bliss (aka Rory O’Neill) when she made her famous Noble Call speech from the stage of the Abbey Theatre in 2014.

That passionate demand for equal treatment was viewed by more than a million people online and helped to secure a Yes vote in the same-sex marriage referendum a year later.

Panti’s gown is now on display as part of a new exhibition called Rainbow Revolution at the Collins Barracks museum in Arbour Hill.

We’ve got marriage equality and a gay Taoiseach – do we really need Pride any more?

Absolutely, according to most LGBTQ community leaders. They accept that huge progress has been made in recent years, but also believe there are many important rights still to be won.

For example, some gay couples who use donor-assisted reproduction to conceive have trouble in getting themselves officially recognised as their baby’s parents. This can lead to practical problems such as not being able to take their child to a doctor or collect them from a creche.

Which LGBTQ issues remain the most controversial?

They nearly all come down to the T part of that acronym – transgender. Earlier this month, the Vatican issued a document called Male and Female He Created Them, which described transgender as “a confused concept of freedom” that would “annihilate nature”.

Although this has been widely condemned, the Department of Education says it can be taught to Catholic children here.

Some Irish schools are taking a very different approach. St Brigid’s National School in Greystones has just introduced a gender-neutral uniform, allowing boys to wear pinafores and girls to wear trousers if that’s what makes them most comfortable and happy.

While this would have been unthinkable only a few years ago, the school says it has received “only a few negative phone calls”.

All these controversies aside, what can Dubliners expect to see on the streets tomorrow?

Pride’s organisers are promising that this year’s parade is going to be the biggest and best yet.

Featuring around 7,000 performers from 150 groups, it will travel from the Garden of Remembrance to Merrion Square and end with an outdoor party including food stalls, face painting, children’s play areas and live music.

There will also be free ice-cream for anyone prepared to lock their lips on a giant kiss cam sponsored by Deliveroo.

READ MORE: Guide to Pride: everything you need to know about Pride 2019