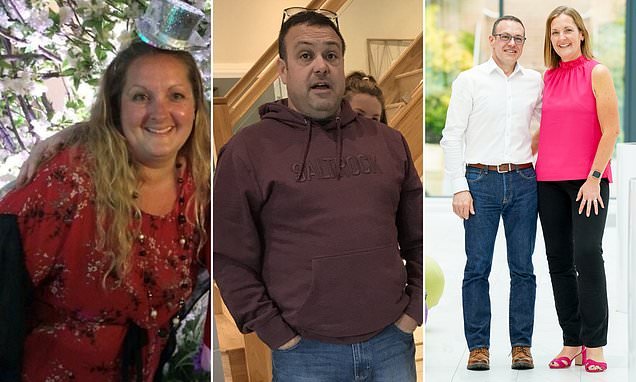 A couple who feared they wouldn’t live to see their grandchildren grow up have lost more than 14 stone between them.

Katie, 45, and Tony Viney, 52, from Bicester started reconsidering their lifestyle when their eldest daughter turned 18, making them think about their long-term future.

The pair, who have now shed a combined 14st 4lbs, would spend family holidays watching their four children play on the beach from the side-lines, due to their low energy.

And Katie, who who once tipped scales at 21st 3½lbs and wore a size 24, has shrunk to a size 10 and 12st 2lbs, after piling on the pounds following the birth of each of her children.

The happy couple say they have a new lease of life, and run up to five miles a day with their dogs. 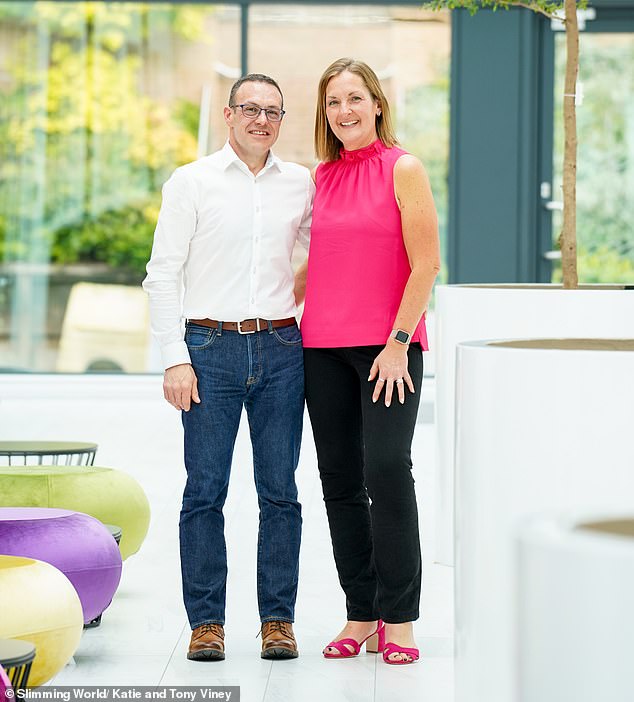 Katie, 45, and Tony Viney, 52, (pictured now) from Bicester, Oxfordshire, have been named as Slimming World’s Couple of the Year after losing a combined 14st 4lbs 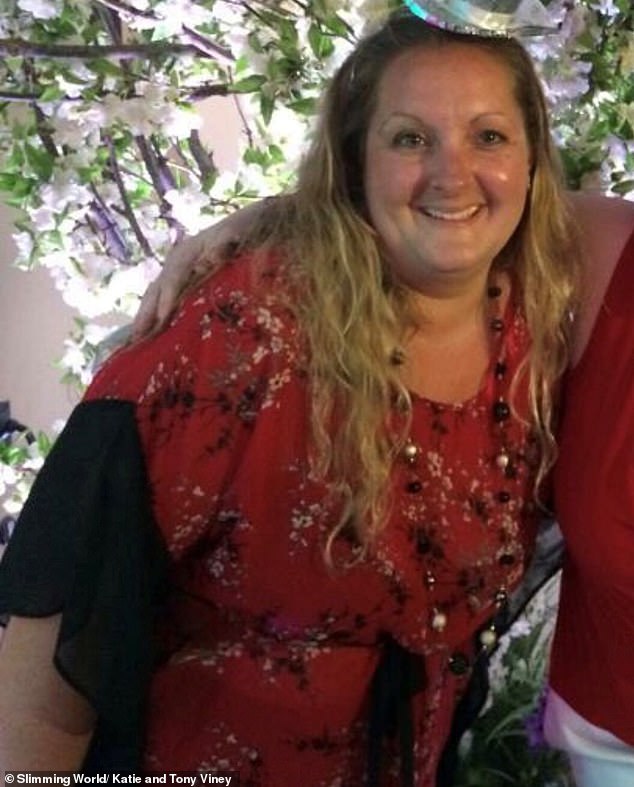 Katie (pictured before) tipped scales at 21st 3.5lbs after her weight escalated with the birth of each of her four children

Tony (pictured before) who once weighed 16st 7lbs, shed 5st 2.5 lbs after joining Katie in purchasing a Slimming World membership in January 2018

‘As a busy mum-of-four I’d put my own health to the bottom of the pile for years. I’d always been big but with every pregnancy I just became bigger and bigger.

‘Each of my pregnancies was deemed high-risk because of my weight – so much so that I needed a big luminous sticker on all of my notes,’ she said.

‘Our eldest daughter Rhiannon was about to turn 18 and it hit me that suddenly my children were becoming adults themselves – and that one day I might have grandchildren.

‘At the rate I was going, I knew that I wouldn’t be around to see them. My fitness was terrible and even a short walk would tire me out. I didn’t even like walking up the stairs unless I absolutely had to. Something had to change.’

Katie who has now lost 9st 1.5lbs by overhauling her lifestyle with the help of Slimming World, received additional support from her husband after asking for an unusual Christmas present.

Now having lost 5st 2.5lbs, Tony said: ‘Like every year, in December 2017 I asked Katie what she would like for Christmas. She became a bit emotional and asked me if she could have a Slimming World membership.

‘I could see how much she wanted to make a change, so I decided to bite the bullet and go along with her. 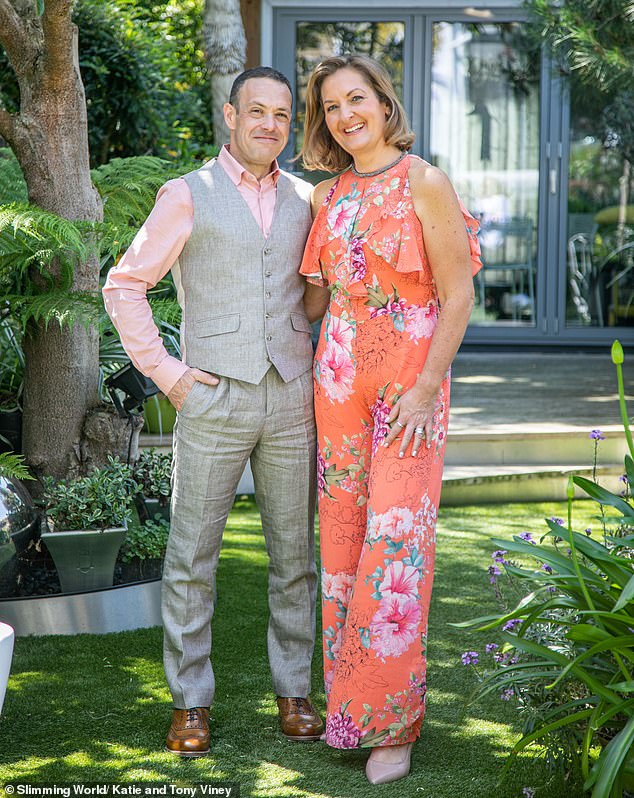 The duo attended a Slimming World group run by Mandy Giraud, Katie who once wore a UK size 24 shrunk to a size 10 and 12st 2lbs, while David, now weighs 11st 4.5lbs (pictured) 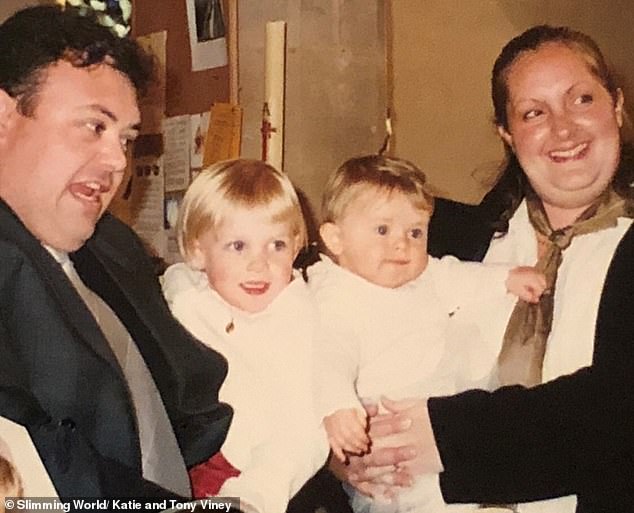 Tony (and Katie pictured before) whose waist went from 38ins to 30ins, revealed that he spent much of his life being overweight

‘I’d always been overweight myself – I grew up in a fish and chip shop so there was always fried food on the menu. In fact, I used to get bored of eating fish and chips so developed a liking for deep fried pies.

‘When Katie told me she didn’t think she’d be alive to see any of our grandchildren grow up, it really shocked me into action.

The duo, who were named Slimming World’s Couple of the Year 2019, admit they were nervous about attending their first group meeting.

Katie said: ‘Even with Tony by my side, the nerves really kicked in. We were greeted with a big smile from our Consultant though and she made us feel at ease straight away.

‘Everyone in the group was so friendly, and there was a big sense of us all being in it together. Tony was especially pleased when he heard about the eating plan, too!’ 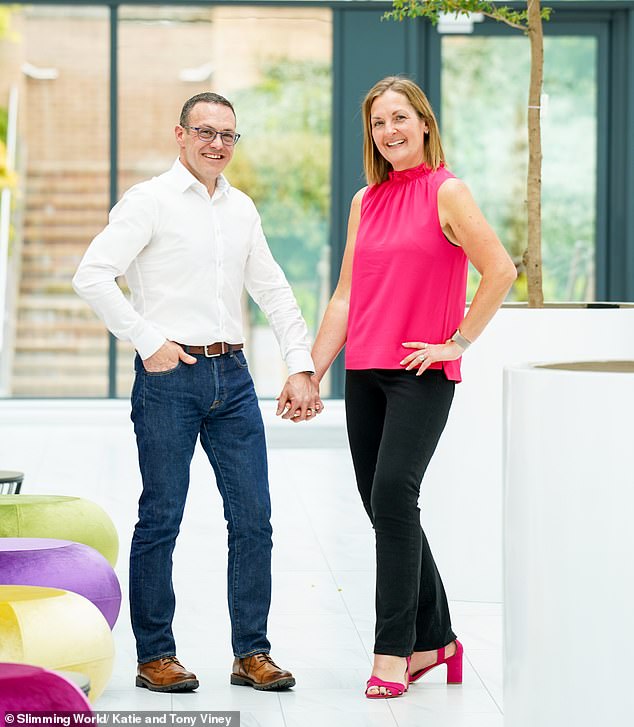 Tony who is a hotelier admits he was hesitant about joining , but soon learnt that many of their favourite meals could still be eaten by making healthy swaps. Seen now 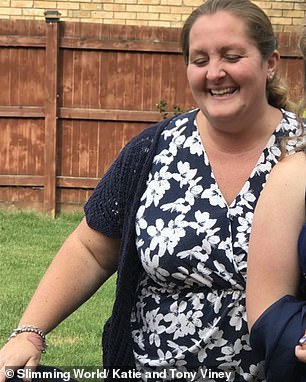 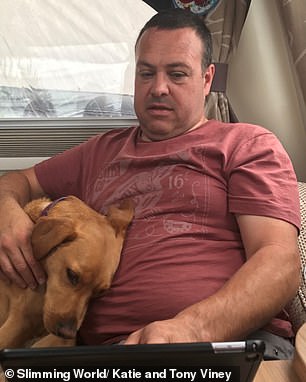 The couple (pictured before) swapped their love of biscuits, sweets and crisps for snacking on fruit instead

Breakfast: Cereal and milk or a pain au chocolat

Tony who is a hotelier, added: ‘As a professional chef I was a little bit worried that we’d have to give up all of our favourite foods and just live on a diet of lettuce leaves! I couldn’t have been more wrong though.

‘I soon realised that I could adapt many of our favourite family meals just by making simple swaps like switching from oil to low-calorie cooking spray and using lean cuts of meat. One of our favourites is a beef stroganoff, it’s absolutely delicious.’

She said ‘I developed lymphedema in my legs after getting cellulitis a few years ago, and as a result had to wear surgical stockings all of the time.

‘Since losing weight though, my circulation has improved so much that one of my legs is completely back to normal now. 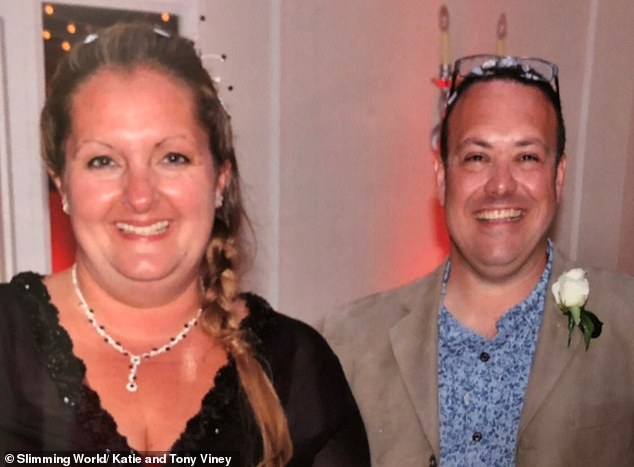 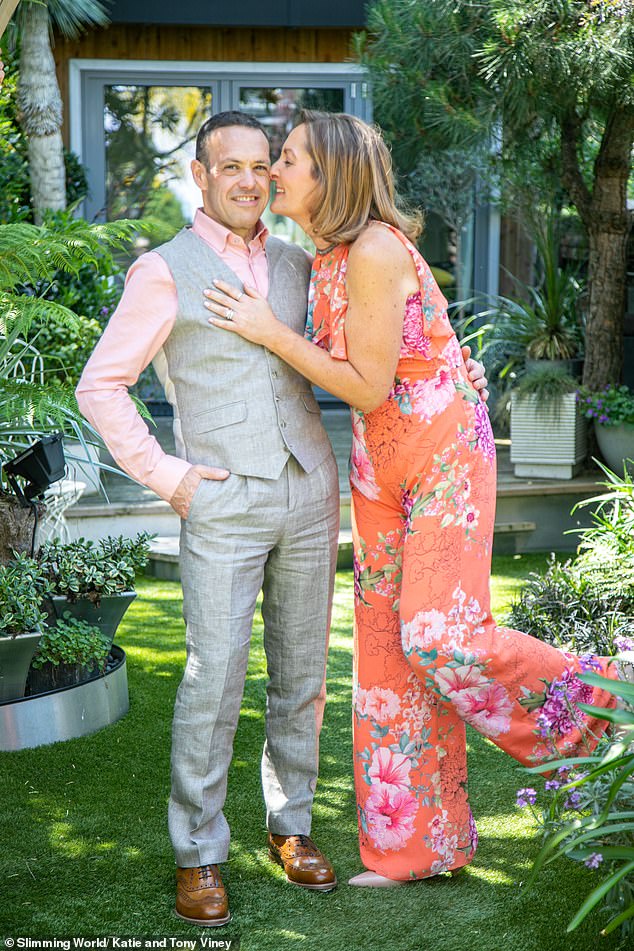 ‘If I’m honest I never truly realised how much our weight was having an impact on our lives before – we have such a zest for life now and we’re ready to take on anything.’

Tony admits that his health has improved since losing weight, too.  ‘Before we lost the weight, we were barely active at all,’ he said.

‘On our family holidays we’d drive up to a beach, open the car doors and watch the kids play from the comfort of the car.

‘Then we’d pack them all up again, drive a bit further up the coast and do the same again.

‘I realise now that we weren’t enjoying the time with our children to the fullest. These days we run four-five miles a day with our two dogs and we’re full of energy – so active family days out are the norm for us now and we hope to be this fit and active for many more years to come.’

Lunch: A burger with bacon, cheese, mushrooms and black pudding

Dinner: A takeaway or creamy carbonara with lots of cheese

Mid-morning: Banana and an apple