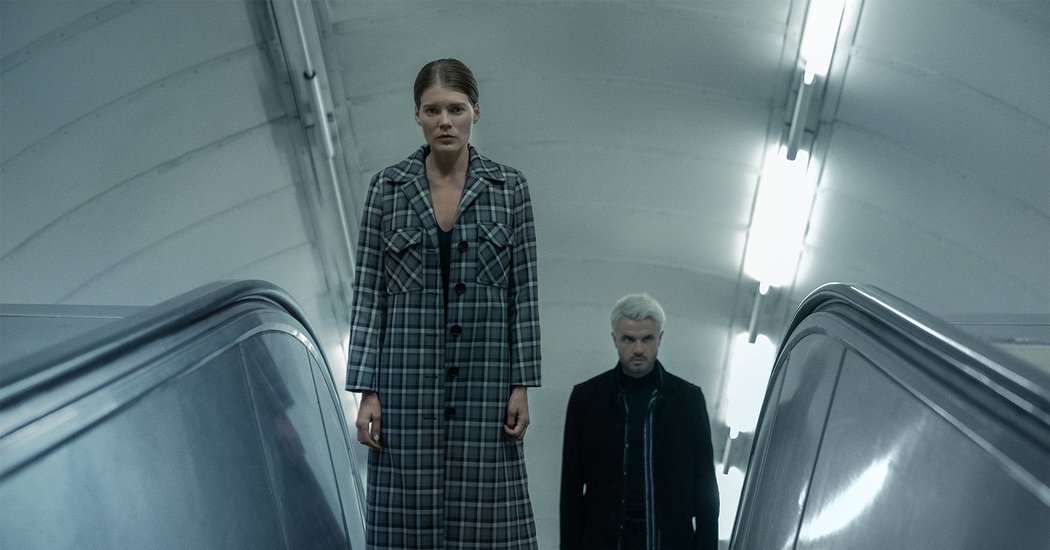 A wan young British woman wakes up beside the Thames, surrounded by mangled bodies. She may have done the mangling, but she doesn’t know if or how or why, because her memory has been erased. No, she is not in a Christopher Nolan film.

Myfanwy (rhymes with Tiffany) Thomas is in “The Rook,” a new series beginning Sunday on Starz that combines elements of a mutant-superhero story, a spy thriller and a workplace drama set in a romantically stodgy Anglophilic institution. Based on a fantasy novel by the Australian writer Daniel O’Malley, it triangulates among the X-Men, James Bond and Hogwarts.

But the Nolan-“Memento” echo may follow you through the show’s early episodes (four of eight were available), as Myfanwy — employed by a secret branch of the British government that deals with the paranormally gifted — discovers that she has left herself handy notes and recordings to help her recover her past.

They’re also a handy device for orienting the viewer within the story, and “The Rook” is generally clever that way — polished, well thought out, more adult-inflected and reality-based than other shows that go for similar combinations of genre ingredients. (Recent comps include a pair of Netflix series, “The Umbrella Academy” and “A Discovery of Witches,” both aimed in a more young-adult direction.)

It was originally under the aegis of Stephenie Meyer, writer of the “Twilight” novels, but she left shortly after shooting began and in the wake of her departure the British producer Stephen Garrett was replaced as showrunner by a pair of American television veterans, Karyn Usher (“Prison Break,” “Bones”) and Lisa Zwerling (“E.R.,” “When We Rise”). Most of the writing, meanwhile, was done by a pair of British playwrights without much screenwriting experience, Al Blyth and Sam Holcroft. From that stew emerged a series that plays down the supernatural, at least in the early going, and plays up the mystery and conspiracy.

We and Myfanwy soon learn that she works for a clandestine agency with the medieval-ish name “the Checquy” (rhymes with nothing; pronounced shekway), where her bosses are quietly formidable and played by Joely Richardson and Adrian Lester, and her co-workers include four siblings, surname Gestalt, who share a single consciousness. (Unlike the computer-generated triplets in “The Gifted,” the Gestalts are played by four different actors.)

The Checquy’s motives and actions are murky, and the lines appear to be blurry between its efforts to prevent the trafficking of people with “extreme variant abilities” (known as EVAs) and its own exploitation of them. The trafficking angle gives the plot some currency, as does Myfanwy’s early discovery that she’s a mouse at work, a middling, deskbound bureaucrat — it makes her season-long quest to uncover the secrets of her past and the extent of her own abilities an exercise in both figurative and literal empowerment.

Emma Greenwell of “The Path” holds your interest as Myfanwy, making her amnesia credible and mixing timorousness with a growing outrage as she recovers, and expands, her memories. Lester, an old hand at dapper menace, is good as a Checquy bigwig with highly useful powers of mind control, such as putting men to sleep while he has sex with their wives in front of them. A touch of humor is added by Olivia Munn, bringing her limited but reliably funny “are you kidding me?” attitude to the role of a visiting American agent.

As entertaining as it may be, “The Rook” is subject to the danger inherent in shows of its type: that the puzzles it builds so elaborately won’t have sufficiently interesting answers. It’s hardly the first story to use the harnessing of superpowers as a metaphor for society’s attempts to control a young woman’s emotions and sexuality, and halfway through the season it’s not clear if the show has anything new to say about that. But it has enough style to make you want to find out.

The Rook
Sunday on Starz

Mike Hale is a television critic. He also writes about online video, film and media. He came to The Times in 1995 and worked as an editor in Sports, Arts & Leisure and Weekend Arts before becoming a critic in 2009. @mikehalenyt • Facebook