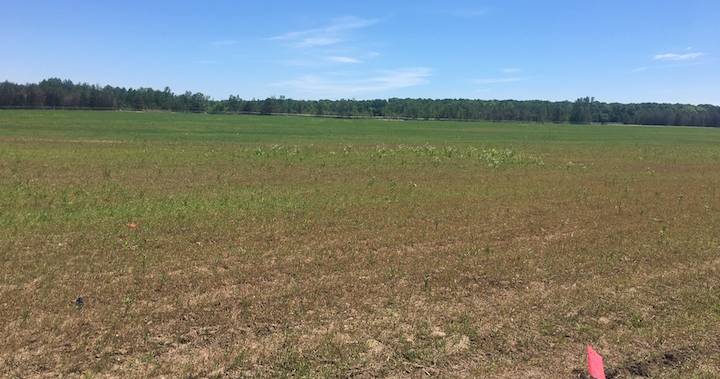 Organizers of the now-defunct Roxodus music festival are under investigation and could face fines and charges after mowing down trees and draining wetlands to make room for the four-day concert that was abruptly cancelled earlier this month.

“There were environmentally protected lands that were impacted by these guys,” said Doug Measures, mayor of the Township of Clearview.

The investigation has been launched by the Nottawasaga Valley Conservation Authority (NVCA) and, according to officials from the County of Simcoe, it could result in charges under the municipality’s forestry conservation bylaw. Officials said 18 hectares of woodlands were cleared without the proper permits or prior approval.

The NVCA also claimed as much as 10 hectares of environmentally sensitive wetlands were either cleared, filled, or drained in preparation for the festival — which would be a violation of both local and provincial regulations.

“A substantial area of disturbance was evident including woodland clearing and potential impact to wetlands,” wrote County of Simcoe planner Kaitlyn Blake in a letter sent to Clearview officials roughly a month prior to the concert being cancelled.

Fab Loranger, the head of Roxodus’ parent company, MF Live Inc, purchased the land east of the Edenvale Aerodrome in Clearview in 2018 under another company operated by Loranger, Taurus Investment Group Inc.

By winter of 2019, work had begun to clear the woodlands, which was supposed to become the parking lot, camping zone, main stage and vendor area for Roxodus.

“A follow up with the township indicated that no such permissions were given,” Blake wrote in the letter to Clearview officials.

By May, concert organizers still had not secured the appropriate permits or completed all the reports and assessments needed for the festival to go forward.

The results of its study concluded protected land — including forest and wetlands — had been impacted in the lead up to the concerts.

“Recent site activities undertaken at the Roxodus festival grounds resulted in the loss of woodland and wetland area. Additionally fish habitat was negatively impacted and is currently in a vulnerable state,” the report read.

In early June, a report by Innovative Planning Solutions to the Township of Clearview outlined many of the worries and the issues Roxodus and its organizers were facing.

In that report, the County of Simcoe NVCA forestry staff recommended Roxodus organizers MF Live Inc. put up a $1.5-million “letter of credit” to ensure the cost of restoring the woodlands would be covered.

A section of lands where officials said trees were removed in advance of the now-cancelled Roxodus music festival.

Before and after aerial shots of the proposed event grounds.

Photos of the environmental impact.

The grounds where Roxodus was supposed to be held, as seen Wednesday afternoon. They appeared largely dry.

A wristband for the Roxodus music festival is shown in Toronto on Wednesday, July 3, 2019. The festival in Stayner, Ont., has been cancelled a week before it was set to get underway.Organizers for the event, which listed Aerosmith, Nickelback and Lynyrd Skynyrd among its headliners, said the event grounds would not be ready in time.THE CANADIAN PRESS/Graeme Roy

The report also recommended the Township delay approval of a temporary use permit needed for the festival to take place until all concerns raised by County of Simcoe and NVCA staff had been addressed.

Global News contacted the NVCA for comment, but it declined to respond citing its ongoing investigation.

Meanwhile, Loranger did not respond to request for comment.

At a council meeting on June 19 — less than a month before Roxodus was set to take place — it was announced that the Township, the County, the aerodrome and Loranger had entered into a special agreement that required Roxodus organizers to “restore any of the subject Lands zoned as ‘environmentally protected’ to their original stage to the satisfaction of the NVCA.”

The agreement also required organizers to provide the NVCA “compensation and/or remediation to address the removal of trees and vegetation and the placement of fill prior to obtaining the required approvals and permits.”

According to Clearview’s mayor everyone except Milan Kroupa, the owner of the Aerodrome, signed the contract.

“The county was working with organizers, land owners and the municipality to establish a valid special events agreement which would have protected the county and public interests,” Debbie Korolnek, spokesperson for the County of Simcoe, told Global News in an email statement.

“This agreement fell through,” she said.

The County is now appealing the temporary use bylaw change and also confirmed an investigation into “a potential violation” of the forest conservation bylaw.

If found to have violated the rules, MF Live Inc. could be fined up to $100,000 for the loss of trees alone.

“Everyone is blaming us, contacting me, making accusations,” Measures said, referring to the loss of land.

“We treated these people like taxpayers. Like anyone else, they got every opportunity to get all the permits.”