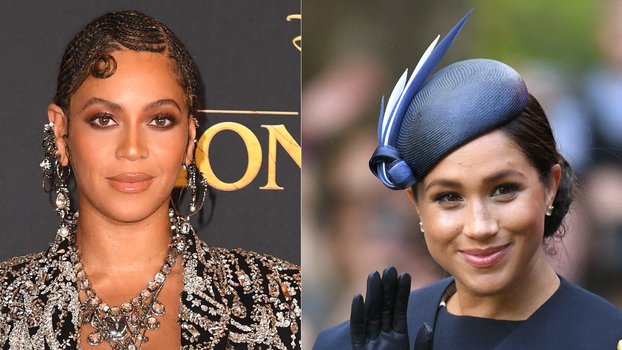 Cue the internet meltdown: Meghan Markle and Beyoncé will be under the same roof very soon — and it's a definite possibility that the two will meet and interact with each other.

Royal reporter Omid Scobie revealed that Buckingham Palace has confirmed rumors that Meghan will be attending the Lion King U.K. premiere on Sunday alongside Prince Harry — and Beyoncé is also expected to attend.

"Expect the internet [to] break down," he aptly tweeted.

The news, of course, raises a lot of questions about what will happen if two of the most famous women in the world cross paths. Will we get a playdate between baby Archie and Beyoncé's kids, Blue Ivy, Rumi, and Sir? Beyoncé did, after all, bring Blue Ivy to the L.A. premiere earlier this week.

Will they discuss the regal Meghan Markle portrait that Beyoncé included in her BRIT Awards acceptance video with Jay-Z earlier this year?

(Meghan's make-up artist, Daniel Martin, previously told CBS that he texted the duchess about the portrait, to which she replied with the big eye emoji.)

Thank you to the Brits for the award for Best International Group. I won this award back in 2002 with my besties, Kelly and Michelle. How lucky am I to have been in a group with my other best friend, the GOAT Hova. ?? In honor of Black History Month, we bow down to one of our Melanated Monas. Congrats on your pregnancy! We wish you so much joy.

Beyoncé also wrote a tribute to Meghan on her website in honor of Black History Month this year, praising her for using her platform for good.

"She became the Duchess of Sussex following her marriage to Prince Harry of the British royal family in May 2018, becoming one of the few Black women to join a royal family," she wrote. "Meghan brought many Black traditions to her Royal Wedding including a Chicago-based Black pastor, an amazing gospel choir, and a young Black cellist. At the wedding her culture was front and center, and she and Prince Harry have continued to push the race relations dialogue forward both near and far."

Fingers crossed for photos of their IRL meeting.