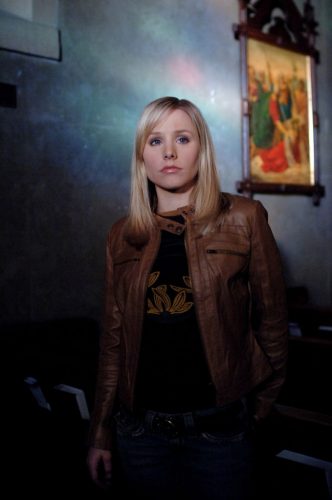 Veronica Mars fans can rest easy. Kristen Bell is prepared to play the show’s title character for a long time. Keep reading to learn what the actress had to say about the series and why she’ll continue to play Veronica Mars ahead.

Veronica Mars premiered in September of 2004 on UPN with Bell playing a smart and witty teen who helped her former sheriff dad, Keith Mars (Enrico Colantoni), with his private detective agency after school.

After getting canceled after three seasons, the show’s creator, Rob Thomas, and Bell launched a Kickstarter campaign in 2013 to raise money for a Veronica Mars movie.

The idea of a film had been often discussed but never came to be until 2014 all thanks to the money raised by fans of the show, or marshmallows (learn why Veronica Mars fans are called marshmallows here). They contributed $5.7 million to the making of the film when the original Kickstarter campaign asked for $2 million, according to CNBC.

This wasn’t the first time Veronica Mars fans rallied together on behalf of the series. In 2006, they saved the show from getting canceled, after Season Two but after Season Three aired, the show ended.

Hulu has since picked up the series for Season 4, which will pick up where the Veronica Mars left off. It will premiere later this month.

In an interview with TVLine, Bell assured fans she wouldn’t stop sleuthing as Mars any time soon.

“I told Rob Thomas that I will do Veronica Mars until it’s Murder, She Wrote,” she said referencing the series Angela Lansbury led in her sixties, before adding, “I will keep doing this show until everyone in Neptune is dead. And then the big reveal [in the series finale] is that Veronica‘s the criminal; she killed everyone!”

On a more serious note, the 38-year-old actress said there’s “an endless life” for Mars because of Thomas’s “commitment to reinventing the story” and the fans desire for more. “As long as the fans want more I will try to do it again,” she said.

Returning to the show ‘a big decision’ for Kristen Bell

The Frozen actress noted it “was a big decision to come back to the show because it’s a huge undertaking. And that means I’m going to miss a lot of [my kids’] bedtimes.”

In the end, she signed on for Season 4 because of her daughters.

“But I said to myself, ‘If we can do it right, it will be worth it because Veronica will be out in the world again as an inspiration.’ I want my girls to have that. And I want people to say, as I do, ‘What would Veronica do?’”

We recommend watching the original seasons before the current season to get to know the cast of the show. Watch Seasons 1-3 on Hulu and the Veronica Mars movie before Season 4 becomes available on July 26.