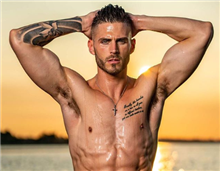 An Irish model is among the contestants on the first season of the US version of Love Island.

As Longford woman Maura Higgins causes a stir on the original UK version on ITV, Cormac Murphy, who is originally from Ennis but living in New York, is gearing up to make an impact on the CBS version.

Cormac (26) made his appearance during the first episode on Wednesday night, although he was not among the original contestants who coupled up at the villa in Fiji.

“If I went to college I’d have a degree in women, I don’t think they know what’s coming, I’m going to turn some heads, I’m here on Love Island and I’m ready for love,” he announced during his appearance.

He announced he would be joining the show on Instagram, although he will not have acccess to his own social media accounts during his time on the show.

His account shared an image of him with the caption, “The cat is out the bag! Our boy has entered the villa! Get ready for some of that famous Irish Charm”. The cat is out the bag! Our boy has entered the villa! Get ready for some of that famous Irish Charm ??❤???? #irishcharmer #loveislandusa #loveisland2019 #loveislandmemes

The cat is out the bag! Our boy has entered the villa! Get ready for some of that famous Irish Charm ??❤???? #irishcharmer #loveislandusa #loveisland2019 #loveislandmemes

Cormac has been living in New York for the past three years and models and works in promotions and events with The Greene Room.

Love Island USA will run until August 7 and whether or not Cormac makes it to the finale, it will undoubtedly boost his profile.  He currently has 17,700 followers on Instagram.

Maura Higgins’ Instagram following doubled to over 112,000 following her arrival in the Marjorcan villa on the UK show.  She now has 861,000 followers.

Read more: Love Island 2019: Michael gets an eyeful of Amber after Joanna crawled for him, while Jordan’s Magic Mike moves had the girls all a FLUH’HER!