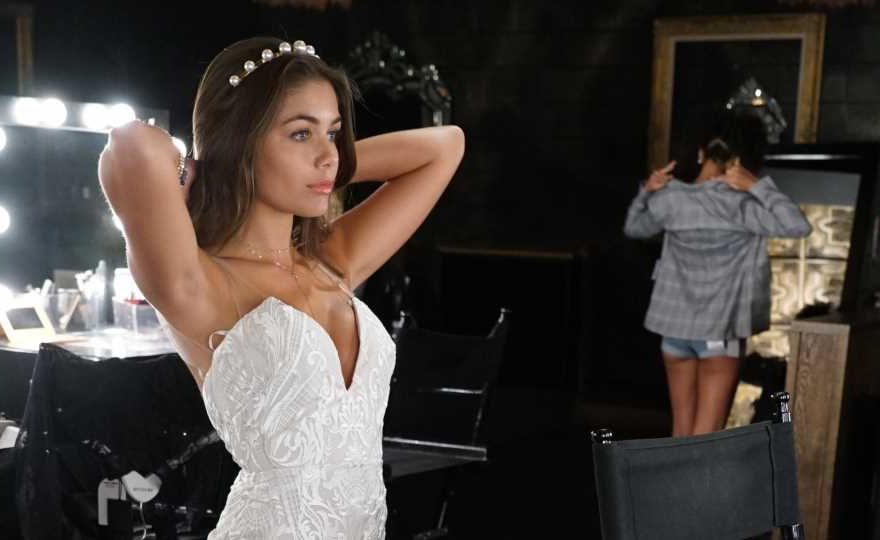 As usual, last week’s Bachelor premiere left off at a high point of drama. Our Bachelor Peter Weber was comforting crying ex Hannah Brown, and — gasp — asking her if she wanted to come on the show for a chance to be his girlfriend. This week picked up right where we left off, but to ABC’s credit, I could barely remember Hannah Brown’s name by the end of the two-hour episode. This week’s show unveiled a clear villain, a feud between two contestants, and several more frontrunners for Peter’s heart. Let’s dive in.

Is Hannah Brown Here to Stay?

While I have no idea whether or not Hannah will return later in the season (I’m firmly anti-spoiler), it seems that the Beast is gone for now. After another 20-30 minutes of Peter (very intimately) rubbing her back while she cries, Hannah vanished into the night as quickly as she came —  leaving Peter to deal with the nine angry contestants wandering around the Avalon Theatre and wondering what the hell is going on.

Peter finds the women and cancels the rest of the group date, worrying more than a few of them that he’s not over Hannah enough to be on this show. Natasha is basically fuming: “I want to get to know a free Peter,” she says. “I don’t want to get to know a chained Peter…I am not going to compete with your ex.”

Happily, Natasha gets a chance to air her grievances to Peter that night. She lets him know she was disappointed by Hannah’s presence, and that he shouldn’t be figuring out the dynamic with his ex at the expense of the other women there. “You’re so direct, but I love that,” Peter tells her. He assures her Hannah B. is in the past.

Blissfully, we don’t have to hear Hannah’s name too many more times. Peter spends some time with Sydney, who tells him about growing up half-white, half-African-American/Dominican in Birmingham, Alabama. It’s surprisingly moving. She gets the group date rose.

And now, for everyone’s favorite part of Week 2: The Champagne Scandal. All 22 contestants gather for a pre-rose ceremony cocktail party, and shit starts to get real in a hurry.

Kelsey, a stunning blond and “professional clothier” hatches an elaborate plan involving a bottle of champagne she once received for her birthday, which she’s been saving for a special occasion. She sets up the bottle outside and plans to go open it with Peter — but then Mykenna, who vowed to “step it up” the night before after missing out on the group date rose, steals him away.

“Hey girl,” Kelsey bombards Mykenna the second she returns. Mykenna attempts to explain herself. Kelsey chugs wine and gives a dramatic eye roll. “You’re making excuses for your decisions,” she tells Mykenna. “And that frustrates the hell out of me.” Clearly not understanding how a cocktail party works, Kelsey goes on to waste precious minutes yelling at Mykenna and fixing her makeup (which, by the way, was already flawless).

By the time Kelsey has re-prepared herself mentally, Hannah Ann has grabbed Peter. Again, Kelsey acts like this is a personal attack, although it’s really unclear what she does expect to happen. Are all the girls meant to ignore Peter until she’s readied herself to talk to him? Has she ever seen this show?

But then — the real crisis — Kelsey hears a champagne cork pop. She hurries over to Peter and Hannah Ann to find them sitting with her Very Special Champagne Bottle, screams something incoherent, and runs off sobbing.

Somehow, Peter is not scared off at this point and chases Kelsey down. He finds a second champagne bottle (which was apparently intended for Hannah Ann), and Kelsey tries to drink from the bottle, getting champagne all over her face. “I’m over it,” she says. We have to imagine that Peter is too.

Kelsey and Hannah Ann get a quick showdown in before the rose ceremony, where Kelsey insists that Hannah Ann knew what she did and tells her she’d “respect her more” if she just came out and admitted it. Hannah Ann insists it was a mix-up. Kelsey calls her a fake bitch.

Clearly, a producer slipped Peter some cash before the rose ceremony, because he keeps Kelsey around, even calling her last and making her stand next to Hannah Ann. (They rarely let the Bachelor send a good villain home early.) Lauren, Courtney, and Payton all go home.

Victoria F. Strips Down & Breaks Down

It’s time for another group date! Alexa, Mykenna, Natasha, Deandra, Lexi, Victoria F., Kelsey, and Hannah Ann (see what they did there?) all head off to Revolve, the clothing brand by which at least 90% of these women are hoping to be sponsored by the end of the season.

Mykenna, Natasha, and Hannah Ann are psyched. “This is like Pretty Woman, but not the bad parts,” Natasha comments, cementing her role as delivering the best one-liners of the evening. Victoria F., on the other hand, is sweating. She’s not as confident as these other girls, and she’s not really looking forward to strutting her stuff on the catwalk.

But strut she does: It’s unclear who or what gets to Victoria F., but she goes from shrinking wallflower to donning only lingerie for her runway walk, and grabbing Peter for a makeout sesh halfway through. She and Hannah Ann (who, to her credit, wore a full wedding dress down the runway) are finalists for the group date competition. Hannah Ann edges her out in the final moments by, uh, posing harder? Smiling more? Unclear. But Victoria F. is devastated. “I’m never good enough,” she sobs to the camera.

Later that night, Victoria F. is still not feeling so hot. ‘I don’t know if I’m made out for this,” she tells Peter. “I just don’t know if it’s worth my mental health.” Peter’s response, which I actually find kind of charming, is to find a secluded corner where she can hang out and get away from the other women. His other response, which I find less charming, is: “I know you’re not like any of the girls here. And it is very endearing to me that this is not easy for you.”

Oh, great! Another Bachelor who thinks that being “like other girls” is an insult — plus, one who likes to see ladies really struggle for his attention. Cute!

The final drama of the evening involves the storm that’s been brewing between Hannah Ann and Kelsey. Hannah Ann, who woke up this morning with renewed conviction that she was bullied by Kelsey, decides she’s going to tell Peter all about it. “She told me to f**k off,” she tells him. “She said I was a bitch, that I was a princess…my spirit was crushed, and I felt bullied.”

Peter decides he’s going to get to the bottom of it, but not until after he gives Hannah Ann the group date rose (her second pre-ceremony rose, after last week’s first impression rose. This girl’s going far).

Peter takes aside Kelsey in the final moments of the episode, who pulls what every single woman in Bachelor Nation has pulled in her position. (So she has seen the show!) Peter relays Hannah Ann’s version of events, and Kelsey more or less denies it entirely.

“I didn’t have a problem with her until she did what she did, and she knew what she did,” she tells Peter. “Yeah, but she’s telling me she didn’t,” Peter replies. “And I’m telling you she did,” Kelsey shoots back. She tells him that Hannah Ann “turns it on,” and that she acts differently toward him than she does in the house. She says they mutually dislike each other, but that she’s shocked and hurt that the word “bullying” has been brought in.

Peter, of course, hasn’t been inside the house, and he can’t tell which one of these women is lying to him. “I don’t know who to believe right now,” he sighs. Kelsey runs off crying…and the episode, mercifully, ends.

In Week 3, we can look forward to a guest appearance from Bachelor and Bachelor in Paradise star Demi Burnett, and — I’m sure — continued drama between Kelsey and Hannah Ann. It wouldn’t be a season of The Bachelor without pitting two women against each other right off the bat, and frankly, the Champagne Scandal is one of my favorite set-ups yet. To be continued!