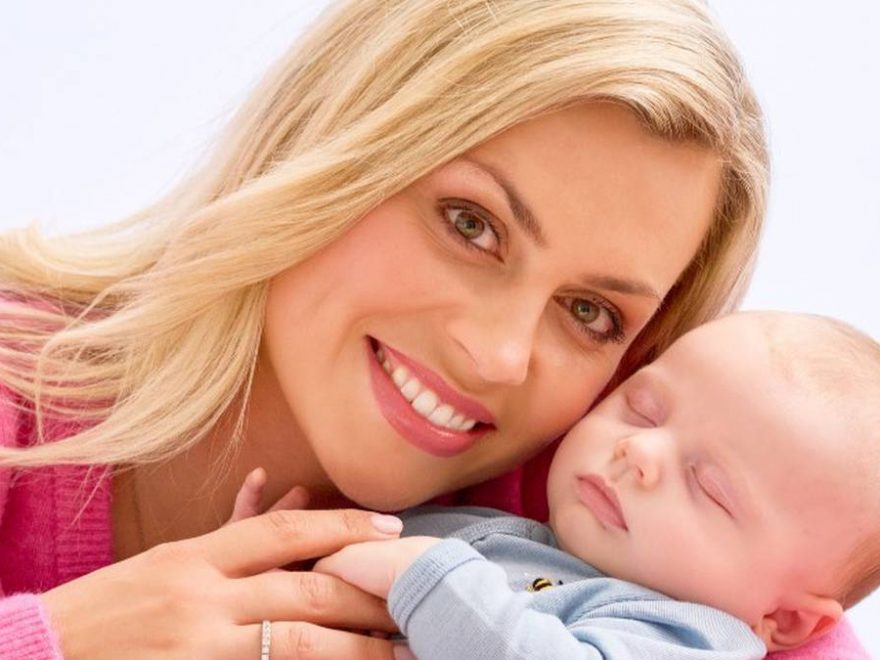 When Woman’s Day catches up with Laura McGoldrick to meet her adorable newborn son, there’s another new addition that catches our eye. Glistening around her neck is a sparkly necklace with the names of her two children, daughter Harley and baby Teddy, flanked by two small butterflies.

“They’re there for my angel children,” the broadcaster says with a smile as she expertly bounces 10-week-old Teddy from one knee to the other. “So all of them are always with me all the time.”

It’s been a long journey for Laura and her husband, Black Caps star Martin Guptill, who suffered two heartbreaking miscarriages on their way to conceiving little Teddy. But as she coos over her son, a remarkably chilled and content wee man, Laura’s face is filled with nothing but joy.

Introducing her little boy – Theodore James Guptill – Laura, 31, says he’s an absolute dream baby, although his entrance into the world was anything but stress-free.

“I gave birth on the first day of Auckland’s first February lockdown,” she tells. “I’d had to have an emergency Caesarean with Harley, so they had recommended I should have a C-section for Teddy too – and it just so happened to be the first day of level three.”

With Auckland locked down due to a community Covid-19 case, and Laura facing the prospect of being away from family and friends in the immediate aftermath of the birth, the radio and TV star admits she was rather emotional.

“Oh, there were a lot of tears the night before!” she tells. “I was just thinking, ‘When is our family going to be able to meet him?’ I had these ideas of Harley coming into the hospital to meet him – those little things I had played out in my mind throughout the pregnancy.”

Laura was thankfully allowed to have her cricketer husband Martin, whom she calls “Guppy”, in the delivery room as she finally gave birth to Teddy with minimal complications, though both parents had to wear masks due to level three rules.

“That was an interesting one – meeting your child for the first time wearing a mask! It’s very 2021, isn’t it? It was such a surreal experience. I had always thought it was a time for the whole family, but only having Guppy there was wonderful in many ways.”

On seeing her son for the first time – mask and all – Laura says the feeling was indescribable. “I got my moment times 100 when they placed him on my chest. He stayed there for ages and I looked at him the whole time. I couldn’t really believe that he was real. It was such a beautiful moment. There were a lot of tears then too!”

Martin was also very emotional, says Laura. “He lost his dad just before we had Harley and I think when he met his son, he was thinking about his relationship with his own dad. It’s such an overwhelming experience, but he was so, so happy. He’s loving having a wee boy.”

After a night in hospital and a night in birthcare, and with 2021’s first lockdown mercifully lifted after just three days, Laura was finally able to introduce Teddy to the rest of his family.

In true elite-sport fashion, Martin had to leave a few days after the birth to fulfil his summer cricket commitments, but Laura was just happy he was there for the “main event”.

“It gave me a newfound respect and empathy for the women who gave birth during level 4,” she says, shaking her head. “I can’t even imagine how tough it must have been.”

Laura and Martin do, however, know how tough infertility can be. Last year, the broadcaster candidly confessed her own struggles with conceiving and pregnancy, revealing live on The Hits that she had suffered two miscarriages. It was a difficult conversation, but an important one – a decision she made in order to let other women know they’re not alone and to start a dialogue about a topic most try to avoid.

“I don’t think I could have been more nervous to tell our story and say it out loud, but I still feel it was the right thing to do,” she says.

And now she’s through the other side, Laura is very grateful and thankful for her two babies, adding that Harley, three, is absolutely loving being a big sister.

“She was pretty cute – she was quite overawed. It’s one thing to talk about it and read books about ‘the house in Mummy’s tummy that grows a baby brother’, but when you’re three, how much can you comprehend? But she’s been so amazing.

“She’s got this maternal instinct. Last night, she got up at midnight, which gave me such a fright – there’s nothing quite like a toddler’s face looming over you in the dark – and she goes, ‘Mummy, there’s no such thing as monsters, but I just want to check on my Teddy.’

“So then I start crying and Guppy’s just looking on bewildered, asking what’s wrong. I’m just going, ‘We have the sweetest daughter!'”

Watching her two children together, says Laura, is simply magical.

“When I had my first child and was about to have my second, I wondered, ‘How could I love anything as much as I love her?’ But then my heart just doubled in size. What was I worried about?! Sometimes it feels like it’s going to burst out of my chest because I love them so much and I’m so happy.”

Now life is all about trying to get into the groove of being a family of four and figuring out the new normal of the McGoldrick-Guptill house – which, as all new mums will know, is a lot easier said than done when it comes to newborns. A vomiting bug and a house move certainly didn’t help matters!

“Oh, it’s all a bit of organised chaos,” she laughs. “Sometimes, I’ll think, ‘I’ve got this baby under control. I totally understand him,’ and the next minute, it’s like, ‘Who is this child? It’s not the same baby I had yesterday!’

“I try to get into a routine, but it doesn’t always work. I don’t keep them to a very strict schedule at the moment – that would mean getting out of pyjamas earlier in the morning and figuring out how to live life without dry shampoo. Honestly, dry shampoo’s the best thing that’s ever been invented for new mums!”

As of this week, Laura is back at work on The Hits, hosting her afternoon show The 3pm Pick-Up. “It wasn’t a long maternity leave, but I love my job. It gives me the balance I need. But everyone’s different and you’ve got to do what’s right for you.”

Indeed, just four weeks after giving birth to Teddy, Laura hosted the 2021 Halberg Awards. It was a daunting prospect leaving Teddy for the first time, she admits, but it was an inspirational evening.

“I mean, you look at some of those athletes who have done incredible things, like Valerie Adams, who won a silver medal at the Commonwealth Games just six months after having her little girl. All I had to do was get up and talk! But it was a lot – although I had a team of people who made me look like a functioning human, so I was very grateful!”

And as for any sporting hopes and dreams for young Teddy, Laura and Martin are leaving that firmly up to him.

“I really don’t care what he’ll want to do as long as he’s happy and healthy,” she muses, looking down at her son, who has inherited his dad’s beautiful blue eyes.

“Harley’s actually quite sporty, so maybe it’ll be her! But I’m just so lucky I have my two babies. I look at them and I think, ‘Please don’t grow up! Stay this way forever!'”

It’s a busy year for the Guptills, with Martin preparing for a lot of time away from home with cricket and Covid quarantines, and Laura getting ready to be a working solo mum-of-two.

“But with the help of my family, I know we’ll be okay,” she smiles contentedly. “I’m trying to enjoy as much time as possible with them. We’re just so, so happy.”

Laura and Woman’s Day are proud supporters of Starship children’s hospital, which currently has a shortage of beds. With just 22 spaces in its intensive care unit for the 1.25 million children under 16 in Aotearoa, the ICU reaches critical capacity every 48 hours. Please visit starship.org.nz or call 0800 STARSHIP to help fund the 10 extra beds that are urgently needed.