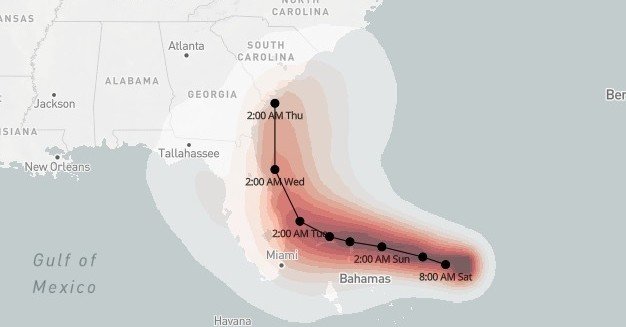 Florida, Georgia, and the Carolinas are bracing for the Hurricane Dorian, currently expected to sweep up their coasts next week. The storm was upgraded to a Category 4 hurricane, with sustained winds of more than 130 mph, late on Friday.

“Life-threatening storm surge and devastating hurricane-force winds are still likely along portions of the Florida east coast by the early to middle part of next week,” the National Weather Service warned early on Saturday morning. “Residents should have their hurricane plan in place, know if they are in a hurricane evacuation zone, and listen to advice given by local emergency officials.”

Colored shading shows the probability of sustained hurricane force winds, greater than 74 mph, over the next 120 hours. The maps in this post will update with each new forecast.

This map shows the most likely predicted track and the likelihood of hurricane force winds from Dorian. But models simulating the storms behavior have a lot of uncertainty, with the main question being when the storm will start to turn northwards. Earlier forecasts had the storm making landfall in central Florida before swinging to the North.

“You don’t want to overread these tracks,” Florida governor Ron DeSantis said on Saturday. “You’re still looking at really significant storm surge in the east coast of Florida. You’re looking at major flooding events in different parts of the state.”

Historically, flood waters from surging seas have been the major killer when hurricanes come ashore. Heavy rains are likely to add to the flooding. Parts of Eastern Florida could see up to 6 to 12 inches of rain over the coming week.

As always, obey evacuation orders from local officials. See here for more information on the storm.