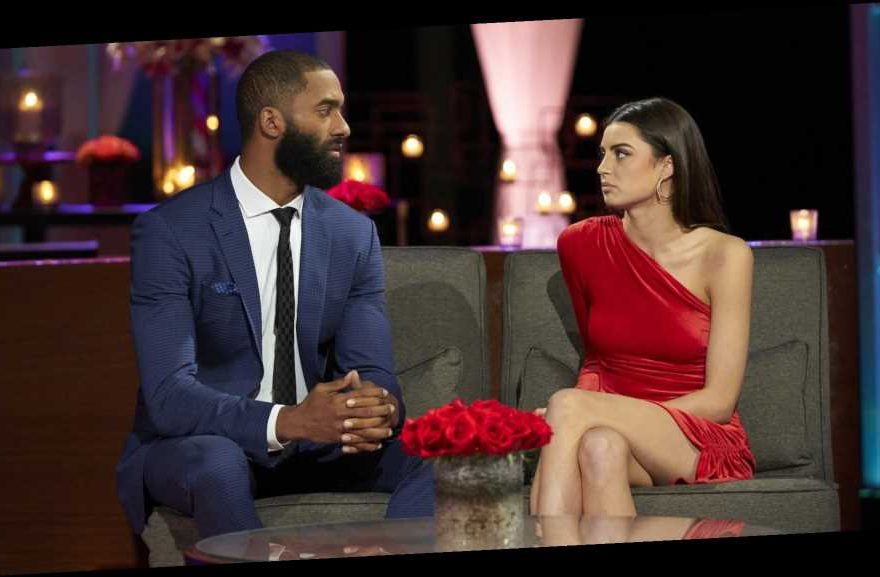 A not-so-final rose. Matt James chose Rachael Kirkconnell during the Monday, March 15, finale of The Bachelor, but when it came time for the After the Final Rose special, the pair revealed they had split.

Matt James and Rachael Kirkconnell’s Ups and Downs: A Timeline

So, what happened after season 25 ended? Kirkconnell, 24, and James, 29, returned home to find out that her racially charged Instagram photos from 2018 had resurfaced and sparked a ton of backlash among Bachelor Nation.

“Matt broke up with her to protect himself. It came at a bit of a shock to Rachael,” a source tells Us Weekly exclusively about the split.

In the old Instagram photos, the Georgia native was shown attending an Old South antebellum-themed party. During a February 9 Extra interview, host Chris Harrison defended the photos, telling former Bachelorette Rachel Lindsay that fans should have “compassion” for Kirkconnell, who hadn’t yet apologized for the photos. Shortly after the interview went viral, she released multiple lengthy messages. Harrison, 49, also apologized multiple times and chose to step away from the franchise temporarily as Emmanuel Acho stepped in to host After the Final Rose.

Despite their split, James was very honest with Kirkconnell as the controversy played out.

“He told her over and over again that he believed her side of the story and that he knew she wasn’t racist,” the insider adds. “He ended things with Rachael because it wasn’t a good look for him to stay with her.”

The graphic designer also took the allegations “very seriously,” a separate source tells Us. “She recognizes that her actions were really harmful, and she fully understands why people are calling her ‘racist.’ She wants to take full responsibility for her actions,” the insider says, noting that Kirkconnell formed a real connection with James, and she “wasn’t interested” in doing the show until he was announced as the lead.

“She saw what he stood for, she appreciated the fact that he wasn’t on the show before,” the source continues. “He was the reason why she took the chance and saw giving up her life for the show was worth it.”

The second insider also adds that Kirkconnell “respects Matt a lot,” and although they have now broken up, “he was supportive” throughout the controversy while the season was airing.

During the After the Final Rose special, while she was still very much in love with James, he explained he had to step back so she could put in the work on her own.

“When I questioned our relationship, it was in the context of you not fully understanding my Blackness and what it means to be a Black man in America,” he told her on Monday. “It broke my heart because this is the last conversation I thought we’d be having. I didn’t sign up to have this conversation.”