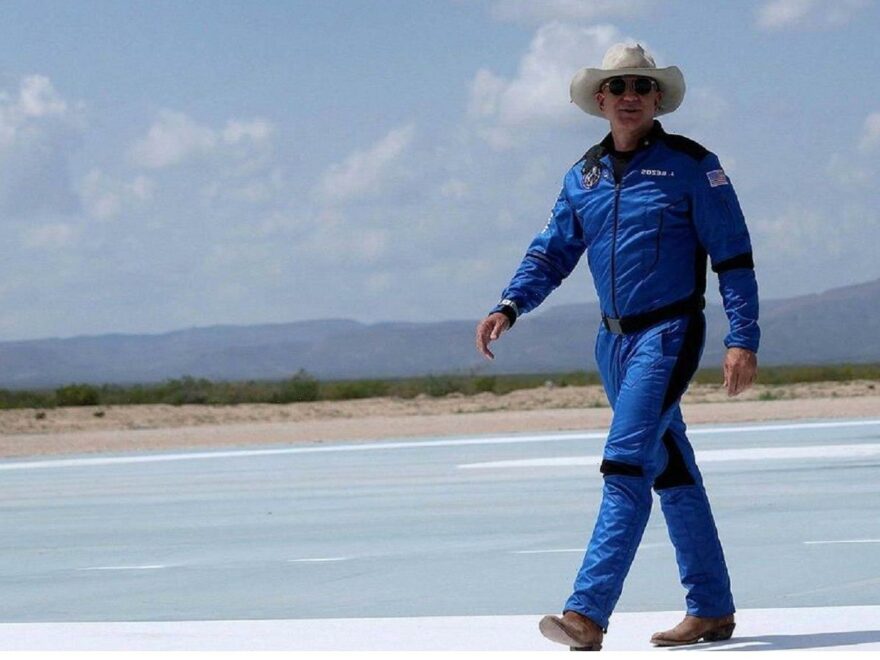 July 5, 1994, changed Jeff Bezos’ life since it is the day he launched American multinational technology company Amazon. Now, twenty-four years later, in 2021, Bezos formally stepped down as CEO, and former Amazon Web Services executive Andy Jassy took over. Bezos is the third-wealthiest person in the world alongside Elon Musk who has impressive investment moneymakers.

According to both Bloomberg’s Billionaires Index and Forbes, despite retiring with a net worth of roughly $139 billion as of October 2022. Despite leaving the company, Bezos is still a billionaire, and that title likely will never change. Take a look at his lifestyle since his retirement as Amazon’s CEO.

RELATED: Before The Billions: The Life Of Jeff Bezos Prior To Amazon

3 Unwinding Across The World In His $400 Million Custom Yacht

Bezos made headlines in May 2021 for his summer vacation plans. Bloomberg reported that Bezos was spending $400 million on a 417-foot yacht. Its three giant sails were so high that the Netherlands, the superyacht-building Mecca where it was born, removed a historic bridge just so the record-breaking boat may sail out of Rotterdam. Landing a helicopter on the yacht was difficult due to its sails, but Bezos who owns multimillion car collection had a backup vessel with a helipad to follow the leading yacht. The shadow vessel is no slouch; at 246 feet in length, it has enough for 45 passengers and crew.

Reportedly, Y721 is almost finished. It wasn’t a breeze to get the shiny new ship out of Rotterdam. The creator of Amazon and current space entrepreneur, Jeff Bezos, offered to pay to have the city’s historic Koningshaven Bridge demolished so that his massive yacht may pass underneath it. The new Superyacht, built by Oceanco for an estimated $500 million, was commissioned in 2018. The luxury shipyard is owned by Mohammed Al Barwani, a wealthy industrialist from Oman, and is located in Alblasserdam, about 12 miles from Rotterdam.

Oceanco has been mum on the project, but that hasn’t stopped a few rumors and leaks regarding Jeff Bezos’s new boat from circulating. The ship’s design is expected to be inspired by the Black Pearl, with three massive masts to harness wind power. The yacht’s sleek black hull and white superstructure were first seen being rolled out of a shipyard last year.

2 Enjoying His $500 Worth Of Million Real Estate

Jeff Bezos has amassed a real estate estimated at more than $500 million. As of 2017, Bezos was ranked as the 28th largest landowner in the United States by the Land Report. The billionaire has purchased multiple properties across the country, including several in his home state of Washington, several apartments in New York City, a few sprawling estates in California, a ranch in Texas, and several places in Washington, D.C.

His most recent purchase is a $78 million compound located on La Perouse Bay, Maui, which sets a new record for the priciest home on Maui. Little is known about the property because it was never on the market. Still, it spans 14 acres and features various buildings, including a 4,500-square-foot main house and a 1,700-square-foot guest house, both designed in the Hawaiian plantation style.

Nonetheless, Bezos spent a record $165 million on the iconic Beverly Hills property of American business magnate David Geffen, making it the most famous and expensive purchase of his life. The mansion is 13,600 square feet and was designed in the Georgian style. The estate also features two guest homes, a nursery, three hothouses, a tennis court, a swimming pool, huge terraces, and a nine-hole golf course on its expansive 10 acres. The luxurious parking lot even has its service station and gas stations.

A mechanical clock called the Clock of the Long Now is currently being built to keep accurate time for at least 10,000 years, with Long Now Foundation being responsible for its construction. Located on Bezos’s land in Texas, the first full-scale prototype clock is being manufactured and constructed by Bezos Expeditions with a budget of $42 million.

The clock will be 500 feet tall, completely mechanical, driven by day/night thermal cycles, and synced at solar noon, according to Bezos, creator of Amazon and richest man on the planet. Bezos said the clock was meant to be a constant reminder to future generations that today’s events are still happening.

For someone as wealthy as Jeff Bezos who owns a $400 Million Mega Yacht, the sky is the limit. Blue Origin, the private space business founded by Amazon’s CEO, is credited for sending the computer mogul into space. Bezos reportedly invested $5.5 billion in the venture. On July 20, 2021, Blue Origin launched their New Shepard rocket on their first crewed mission, making history.

Jeff Bezos, his brother Mark Bezos, aviation pioneer Wally Funk, and Oliver Daemen, an 18-year-old student from the Netherlands, were on board for the launch from Blue Origin’s Launch Site One in West Texas near Van Horn. Daemen was the first paying passenger on New Shepard.

READ NEXT: A Peek Inside The Opulent Lifestyle Of Jeff Bezos’ Girlfriend, Lauren Sánchez