Acting Prime Minister Barnaby Joyce insists Christian Porter has done nothing illegal by accepting anonymous donations and expects he can return to the frontbench in the future, as Labor argues the former Industry Minister remains in breach of his obligations as an MP.

Launching a defence of his former cabinet colleague, Mr Joyce used a cricket analogy saying Mr Porter has “had a bad day at the wicket”, adding the “issue has been dealt with”. 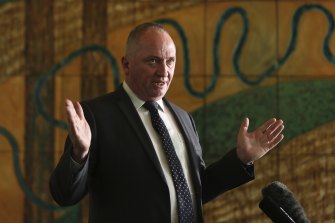 Mr Joyce is acting Prime Minister after Scott Morrison flew to Washington DC on Monday morning to meet with US President Joe Biden as part of a week-long visit to the US. After three years on the backbench, Mr Joyce returned as the leader of the Nationals this year after winning a spill motion against Riverina MP Michael McCormack.

Drawing on his own experience on the backbench, Mr Joyce said Mr Porter would have “a bit of time on [his] hands” but suggested he could make a comeback to cabinet if he used that time productively, describing him as an “incredibly intelligent person”.

“If he uses [his time] effectively, I believe he should be given another chance at some future time in a senior role.”

Asked why it was not acceptable for a minister to take mystery donations, but the same standard did not apply to MPs, Mr Joyce responded: “The ministerial code of conduct is not a discussion about legal or illegal. It’s a discussion about what is the Prime Minister believes is acceptable to be a minister. Mr Porter has not done anything illegal. If he had, the police would be here. 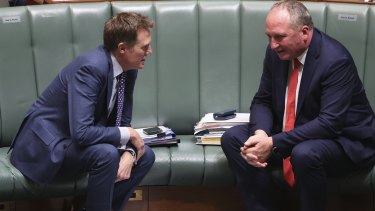 Barnaby Joyce said Christian Porter would have “a bit of time on [his] hands” on the backbench.Credit:Alex Ellinghausen

“Now the contract is from his employer which is the electorate of Pearce.”

Opposition Leader Anthony Albanese said Mr Porter was “certainly breaking the rules” by not disclosing the source of the donations in the MPs register of interests.

“Who provided this money? Is there any conflict of interest? Does anyone who provided money have contracts with the government? There are real reasons why members of Parliament have obligations to declare publicly any private interests that they receive,” Mr Albanese told ABC radio.

Mr Porter, the member for the Perth electorate of Pearce, resigned as Industry Minister on Sunday days after immense pressure and criticism over his decision to accept anonymous donations through a blind trust for legal fees in his since-discontinued defamation case against the ABC. He resigned before the Prime Minister had received official advice determining whether ministerial standards had been breached.

On Sunday, Mr Morrison said Mr Porter was “upholding the [ministerial] standards by resigning” because he could not disclose the donors and establish there was no conflict of interest, adding “that matter is now concluded”.

In his resignation statement, Mr Porter indicated he had been in contact with the trustees who received and administered the donations and they had assured him none of the contributors were lobbyists or prohibited foreign donors. He said he was unwilling to disclose the identities of those who contributed funding in order to protect them from “the social media mob”.

Mr Albanese said if the precedent was allowed to stand, any MP could receive anonymous donations and the register of pecuniary interest “may as well be torn up”.

“Quite clearly, one of the things that needs to be explained is how these donations were solicited. It’s beyond belief that somehow this fund was spontaneously created, that people found out by themselves somehow through some osmosis process how to put money into a bank account, into a trust fund, that was in to be used for Christian Porter’s legal defence,” Mr Albanese said.

“Now people do know, someone knows, who these people are. Someone also knows how the funds were solicited.”

Mr Porter has maintained he did not believe he had breached ministerial standards and would not step down from his seat. He has nominated for preselection as the Liberal candidate for Pearce at the next federal election

Mr Porter sued the ABC and reporter Louise Milligan for defamation in March over an online article he alleged portrayed him as the perpetrator of a rape in 1988. He denies the allegation and the case was settled in May. Mr Porter obtained court orders removing crucial details of the ABC’s Defence from the public file, and then orders prohibiting other media outlets from reporting those details.