At the beginning of question time on Tuesday, Mr McCormack was seen pointing and gesturing at the man who replaced him in June, following the publication of a story by news.com.au detailing Mr McCormack’s displeasure with his colleague, Queensland MP George Christensen, over a social media post on Monday night. 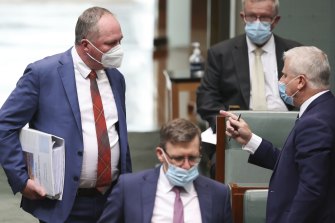 Nationals MP Michael McCormack was seen pointing and gesturing at Barnaby Joyce at the start of question time.Credit:Alex Ellinghausen

The bizarre video was posted on Facebook by Mr Christensen showing Queensland senator Matt Canavan’s face superimposed on that of the Terminator, who shoots people, including a police officer. It was captioned: “This is pretty much Senator Matthew Canavan dealing with the disastrous net zero push today.”

Tension within the junior Coalition partner has been high since the change of leadership, with both Mr Christensen and Senator Canavan becoming more outspoken over Coalition policy, in particular the target of reaching net zero emissions by 2050.

Mr McCormack, whose son is a NSW police officer, phoned Mr Christensen about the post on Monday night to express his displeasure and then sent a series of messages to the “Nats Chat” group on encrypted messaging app Signal, described it as “beyond the pale”.

“One of the people shot is a uniformed police officer. As the father of a police officer, I find this abhorrent. This is not the way we should be debating climate change policy,” he wrote.

“I appreciate it is the Terminator and the uniformed officer in the movie is not the good guy, but we have to be better than this, surely … I’ve spoken to George and let him know how I feel.”

In a response in the group chat, Senator Canavan said he was OK with the post.

“As you say, the ‘cop’ is actually a shapeshifting, T-1000 Terminator model sent from the future back in time to kill John Connor. He deserved to get smoked for the good of humanity,” he said.

The leak of the private messages to the media just before question time enraged Mr McCormack, who demanded Mr Joyce raise the issue with the leaker, who he believed to be Senator Canavan. 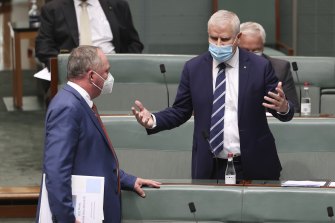 Mr McCormack demanded Mr Joyce raise the issue of leaked messages from a Nationals chat group to the media with the leaker.Credit:Alex Ellinghausen

Mr Joyce told this masthead he was unaware of the publication of the story before the confrontation with Mr McCormack in the House of Representatives. He returned to speak to Mr McCormack about seven minutes after their initial discussion.

“He had every right to be angry,” Mr Joyce said. “It is clearly not acceptable. I hadn’t seen the story when he first raised it with me. So I went away to discover what he was talking about and then I returned to discuss it with him. It is not acceptable and I have made that clear.”

It is the second damaging leak from within the Nationals this week, with The Sun-Herald revealing at the weekend MPs were fuming after details of their list of demands for agreeing to a net zero emissions target were canvassed publicly before they had seen it.

Messages sent by Senator Canavan to his Nationals colleagues on Thursday night and Friday morning suggested a media story on Friday about the party wanting a socio-economic safety valve for the regions “reads like it has been planted by PMO”. 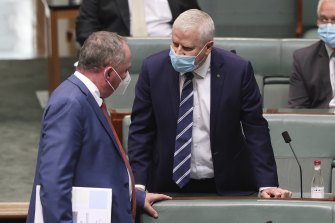 Mr Joyce said: “It is not acceptable and I have made that clear.”Credit:Alex Ellinghausen

Mr McCormack said he was concerned about the leaked text because he “did the right thing”.

“It wasn’t meant to go public and I am disappointed that it did,” Mr McCormack said. “It is grist for the media mill but it serves no purpose in getting regional Australians what they want: more jobs and better services. And it is anti-police and just dumb stuff. We’ve got to be better than that.”