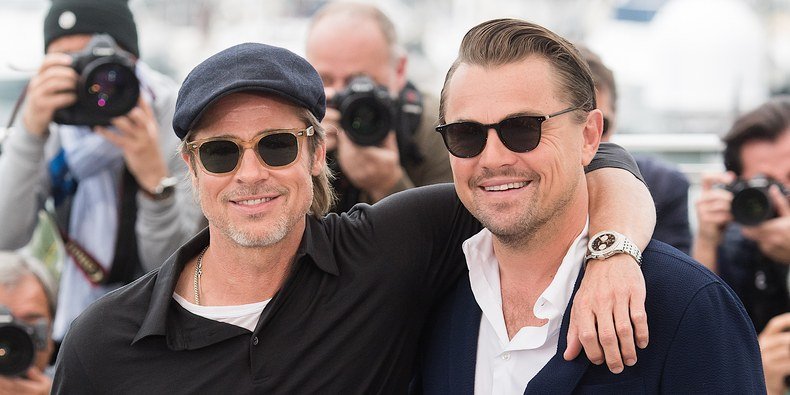 It's not like Quentin Tarantino to shy away from bloodshed. And yet, his latest, Once Upon a Time… in Hollywood, is barely about the Manson murders; instead, it's so devoted to documenting the bromance between Brad Pitt and Leonardo DiCaprio that several of the film's many non-Leo and non-Brad cast members didn't even make the final cut. In essence, the film is the closest we might get to seeing an actual romance between the pair since they turned their rumored Brokeback Mountain offers down.

But now that Tarantino has brought the two enormously successful actor-slash-heartthrobs together, Pitt and DiCaprio are weaving their own kind of love story, on their own terms. From their repeated joint appearances in the months leading up to the release of Once Upon a Time, and the week that's followed, the first-time costars have made it clear that they hit it off famously on set. The same seems to be true in real life—especially if you believe the rumors that they've been spending late nights making pottery and eating sandwiches together until well past midnight.

Even if their joint arts and crafts sessions are tabloid fodder, it's no secret that Pitt, 55, and DiCaprio, 44, share a love of art. And now that they've started palling around, a new similarity between the pair has emerged: Both harbor deep affection for the polarizing accessory known the newsboy cap.

Leonardo DiCaprio seen riding a CitiBike on May 10, 2016 in New York City.

To give credit where credit is due, DiCaprio, who's famously photographer-shy, has been a fan of the style for years. (He's worn one everywhere from a gala to a climate change march.) But Pitt, too, is something of a celebrity newsboy cap pioneer, and seems to have been wearing one more than ever as of late. (He's even found a new way to wear one: flat on his face, to keep the sunlight from getting in the way of a midday nap.) In both of their cases, you're most likely to spot them wearing one in the midst of a crowd.

Leonardo DiCaprio at the men’s final match between Britain’s Andy Murray and Serbia’s Novak Djokovic at the Roland Garros 2016 French Tennis Open in Paris on June 5, 2016.

Perhaps out of respect for each other's poster boy statuses, Pitt and DiCaprio have yet to be photographed wearing the style at the same time. Instead, like true gentlemen, they appear to be taking turns. From the look of the photo below, that's occasionally caused DiCaprio some suffering, but he's managed to power through.

Brad Pitt and Leonardo DiCaprio at the Once Upon A Time In Hollywood press conference during the 72nd annual Cannes Film Festival on May 22, 2019 in Cannes, France.

Of course, Hollywood's two biggest movies stars have yet to become entirely one. DiCaprio, for example, has yet to make like Pitt in carrying around a bucket bag. As for Pitt, well, he at least has yet to adopt DiCaprio's strict policy of only dating women under the age of 25.

Related: Are Brad Pitt and Leonardo DiCaprio Staying Up Late, Making Pottery Together?