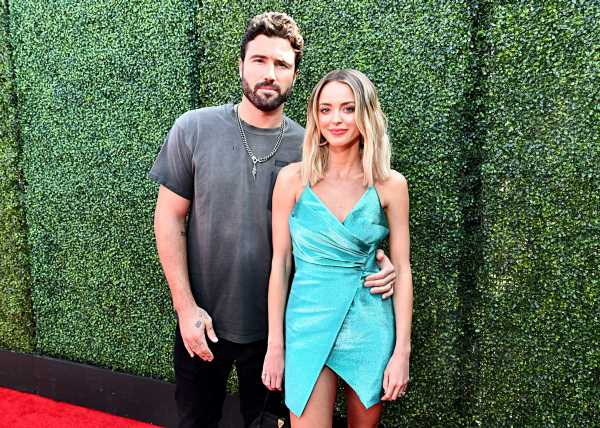 Brody Jenner’s dating life was a main storyline during the original run of The Hills. Life has majorly changed for the former bachelor. The reality TV veteran is a married man. Now, Brody Jenner and his wife Kaitlynn Carter Jenner are sharing their relationship ups and downs on The Hills: New Beginnings, but there are some gaps in time that need to be filled in for the longtime fans of the show. The two of them got together in between the original show and the reboot; therefore, a relationship timeline is necessary for the fans who want to be in the loop.

Before Kaitlynn was in the picture, The Hills viewers got to know Brody when he was a "love interest" of Lauren Conrad’s, who was the narrator of the original series. However, their romance was not what it seemed like on the show.

In a 2015 interview originally published by Yahoo Style, Brody admitted the truth about his relationship with Lauren. He admitted, "We were just friends. We’d film a scene of us kissing or being in this lovey-dovey scene, and then right after it would be like, ‘Cut,’ and we’d be like, ‘Great to see you,’ and we’d go our separate ways."

Viewers saw Brody date and "date" a few women throughout Seasons 2-6 of The Hills, but now fans are seeing the real life romance (and drama) with his wife Kaitlynn play out on the reboot. The rest is still unwritten, but there is a lot to catch up on when it comes to their relationship past.

Let’s take a stroll down memory lane to see how Brody went from the single life to wifing up a social media Instagrammer.

In a 2018 joint interview with People, Brody and Kaitlynn shared that they met at a party in 2013, Brody recalled, "I was going after her." Kaitlynn also revealed, "He was really honest about what he wanted, no messing around, and I found that really charming and refreshing. Pretty soon after we started dating, I thought it could be for life." On Oct. 26, 2014, Brody posted about his one-year anniversary with Kaitlynn, which indicates that the two officially started dating on Oct. 26, 2013.

In May 2014, E! News broke the story that Kaitlynn and Brody were a couple. It is unclear how long they were dating at the time, but the relationship did seem to pretty serious since Kaitlynn had already met Brody’s mother Linda Thompson, his brother Brandon Jenner, and Brandon’s then-wife Leah James.

Brody’s ex-stepsister Kim Kardashian and Kanye West tied the knot in 2014. Kimye invited Brody to the wedding, but they did not allow him to bring a plus one even though he was dating Kaitlynn at the time. As a result, Brody did not attend, and their family drama became very public news, once again.

In an Instagram post, Brody revealed to his followers, "On May 4th 2016 I got engaged to my lover and my best friend [Kaitlynn]. I couldn’t be more in love with this woman and I can’t wait to spend the rest of my life with her." Kaitlynn shared the same photo and wrote "this trip has been memorable for many reasons… happiest girl in the world!!!"

On June 2, 2018, Brody and Kaitlynn tied the knot in Indonesia, which People confirmed at the time. And it was a pretty exclusive guest list, as Brody’s longtime pal Frankie Delgado and frienemy Spencer Pratt pointed out during The Hills: New Beginnings premiere episode since they were not invited. In all fairness, the Jenners only invited fifty friends and family to the destination wedding.

In September 2018, Entertainment Tonight reported that Brody and Kaitlynn signed on to be cast members on The Hills: New Beginnings. The show premiered on June 24, 2019, with Kaitlynn and Brody having prominent roles in every single episode so far.

Now that The Hills: New Beginnings is in full swing, expect to see even more updates about Kaitlynn and Brody’s relationship.