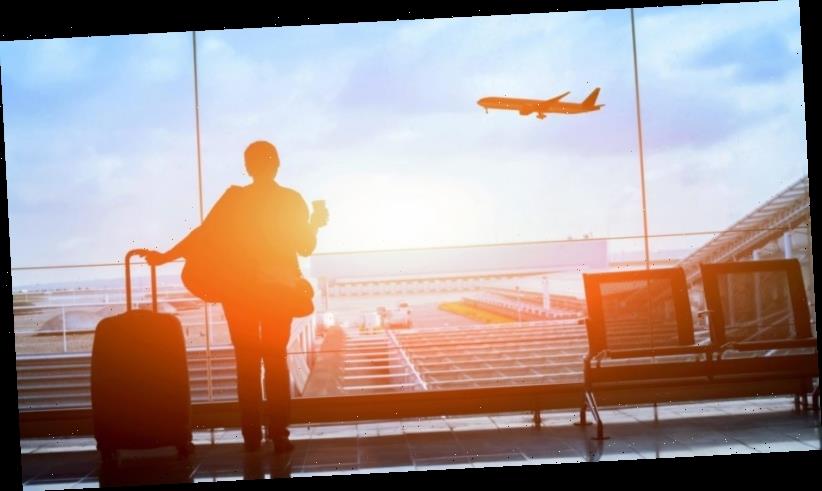 Fears Australian holidaymakers would face hefty fines if they didn't leave Bali by August 20 have eased after Indonesian immigration announced it would allow tourists an extra month to be granted new visas.

The Indonesian Institute in Perth has been lobbying for the extension of emergency visas granted to stranded Australians in Bali, as many faced being caught in a complex web of Indonesian bureaucracy or pay skyrocketing costs to come home. 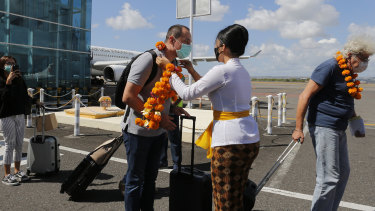 A passenger being welcomed at Denpasar airport in Bali after the resort island reopened its borders to tourists on July 31.Credit:AP/Firdia Lisnawati

The institute’s Ross Taylor said many of the 3000 Australian short-stay visa-holders in Bali had sought a six-month social visa, which required a local sponsor and meant stepping around the usual laws of immigration; “so it does take you into a slightly murky, complex world”.

“People, I understand, are going to where the accommodation is and get to know the people at the hotel, saying: ‘Look is there someone where we pay you X amount of dollars, would you agree to be an authority that gives us the letter you need?’” Dr Taylor said.

“But once again you need to exercise caution, [because] you’re basically buying your visa extension.”

Australian expat Sammi Salter told Nine News Perth some people reported being “ripped off by visa agents” because they were “stressing out about the information coming out” and scrambling to beat the August 20 deadline.

Fellow Australian Peter Cisilin, who has been living in Bali for four years, said he was still awaiting word on his visa that would allow him to stay without facing $US100-a-day fines ($140) or imprisonment.

“If there’s one spelling mistake, one error, your application is then rejected,” he told Nine News. “I find myself bursting into tears at the drop of a hat.”

But the vast majority of expats hold valid visas and face no pressure to leave, including West Australian retiree Geoff Page, who said immigration, despite being somewhat slow and awkward due to a lack of simplicity and clarity over the interpretation of announcements, had been "fantastically obliging and helpful – gradually finding solutions to suit, albeit temporarily, for most".

Stranded foreigners have posted to Facebook groups that the cost of coming home could buy them a house in Bali, yet some were living on dwindling funds with close to expiring passports.

“And if they haven’t come home, they need to pay for their hotel quarantine. The taxpayers shouldn’t have to pay,” Mr McGowan said on Monday.

Dr Taylor said the fortnightly Garuda flight from Jakarta to Perth cost $3500 per person travelling economy, coupled with the mandatory hotel cost of $2500 for singles or $3000 for couples.

“You’ve just got this almost checkmate situation for Aussies in Bali, [where] … governments now are saying to people, ‘well we told you so’, but I’m not too sure how that helps our citizens.”

Dr Taylor has been speaking with the Bali Tourist Board to lobby the Indonesian government about the complexities Australians faced given many couldn't get economy flights home due to limited flights and a cap on international arrivals.

“Because there’s such a tight quota coming into WA the airlines are saying, well there’s 40 seats and 40 people are prepared to upgrade [to business class] – there’s your $9000 – either pay that or you’re stuck. And that’s a mess too,” he said.

“It’s a really complex problem and … given the uncertainties, it would be prudent to extend the freeze perhaps for another two months to give people just a little bit more time because people just can’t make it and the clock continues to tick.”

Dr Taylor said Australians could catch a cheap domestic flight from Bali to the Indonesian island of Batam and then catch a 40-minute ferry to Singapore, which operated more flights to Australia. Singapore also provides free quarantine.

“It’s a very easy process and it is possible when you arrive in Singapore to say to immigration, ‘I don’t want to go into quarantine, would you allow me to get on the next boat without leaving the facility and go back to Indonesia?’ And then of course when you go back there’s another 30 days [extension],” he said.

“It’s very messy and it’s pretty dangerous in this environment but if people need an option it could work.”