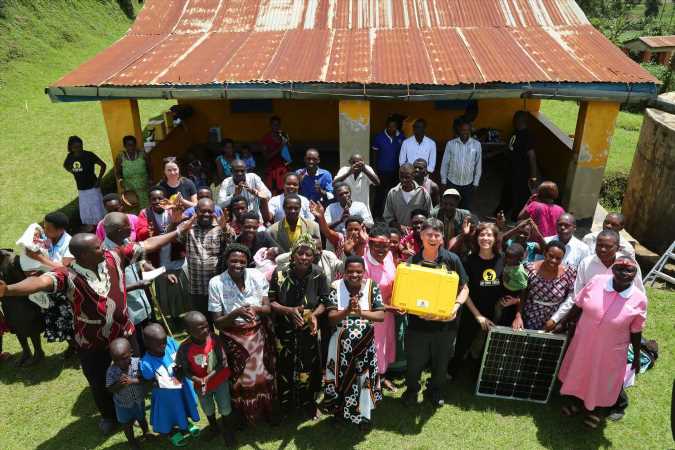 In March 2008, Dr. Laura Stachel was sitting in a hospital in Northern Nigeria and watching a woman die. The experience wouldn’t just impact her — but change the lives of countless others.

At the time, Stachel was on a two-week trip to Africa as part of a graduate program in public health at the University of California-Berkeley. Since she had spent 14 years practicing as an OB/GYN, Stachel was asked to observe births at a rural hospital and pinpoint why so many mothers and babies were dying.

The answer quickly became clear: The hospital didn’t have a steady source of electricity.

One day, the blood pressure of a woman with eclampsia was skyrocketing when the electricity shut off. Unlike U.S. hospitals, when the power went out, there was no generator or battery backup.

“There was utter darkness,” Stachel, 60, tells PEOPLE. “There was no light whatsoever. I said, ‘She’s going to die. Why am I here watching this?’ ”

More nightmares piled up. During a C-section, the lights went out. A woman needed an ultrasound, but the machine required electricity. Babies couldn’t be kept warm inside incubators, because they need to be plugged in. Hospital staff couldn’t store blood in the refrigerator or keep medicine cold.

“The lack of electricity made it impossible to provide life-saving care,” says Stachel, whose son is The Band’s Visit star Ari’el Stachel. “I was so stunned, just shocked by what I was seeing. I had no idea this issue existed, where people could be in hospitals without electricity. I said, ‘Maybe I’m here because I could help think of ways to solve this problem.’ ”

Back then, Stachel’s husband, Hal Aronson, was teaching solar electricity in California. “He said, ‘Let’s design a solar electric system for the hospital, and see if that will make a difference,’ ” Stachel says.

Aronson, now 63, designed a solar-powered system for the maternity ward and the delivery room and created a solar-powered blood bank refrigerator. They received a grant to fund it and Aronson made a demo kit for Stachel to take to the hospital.

Stachel needed her husband to make “something I can fit and carry in my suitcase.”

“I said, ‘Make it small enough so I can smuggle it through customs — I don’t want to be stopped,’ ” Stachel remembers.

“They said, ‘This is incredible. Can you leave it here?’ ” she says.

Stachel explained that the devices were just to demonstrate the power of solar and that they would receive a much bigger system. “They said, ‘You don’t understand. This can help us save lives now,’ ” Stachel says.

In February 2009, Stachel again returned to Africa and installed a large solar-powered system at the hospital. Friends and neighbors gave her old suitcases, and her husband and a team of volunteers put together small solar kits that Stachel took to other hospitals in Africa.

In May 2010, they officially launched the non-profit We Care Solar, which distributes Solar Suitcases. We Care is an acronym standing for “Women’s Emergency Communication and Reliable Electricity.”

“It’s also named We Care because I wanted my sisters and brothers in African hospitals to realize that people did care about the challenges they were facing. When I go to health centers in very remote areas, and people are so brave going to work at night in such challenging conditions, I tell people, ‘Don’t feel like you’re alone.’ When you see the solar suitcase, realize you have brothers and sisters on the other side of the world who do care about you,” Stachel says.

She has given out 4,000 Solar Suitcases to date. In some countries, she says, women in labor have to bring their own candle. One midwife didn’t have a candle — she just had a match. The birth was difficult, Stachel says, the midwife told her assistant to light the wall calendar on fire.

When Zaslow started working in Northern Uganda in 2006, she had to use the flashlight on her rubber ducky key chain when she delivered babies.

“It was a tiny little light — it was a rubber ducky and it would quack while somebody was delivering. But it was the only light we had at night,” Zaslow, executive director of Mother Health International, tells PEOPLE. “There’s no way to describe how valuable having basic infrastructure is for safe birth outcomes. If somebody is bleeding, and it’s very dark, it’s very hard to assess how much blood they have lost.”

“If somebody is having a seizure, it’s very hard in the dark to assess the level of severity,” Zaslow continues. “If you need to give somebody an IV, you don’t have a bright light to see a vein. All the basic fundamental things we can do to keep moms and babies safe in birth are made better with light.”

Zaslow’s birth center received a solar suitcase about six years ago, she says.

“That one suitcase lit up thousands of births,” Zaslow says. “It was really, very, very helpful and very lifesaving.”

“But not anymore,” he says, adding that it’s all thanks to the 150 solar suitcases donated. “Without it, emergency obstetric and newborn care couldn’t have been done in the night.”

Jacquie Cutts, the 31-year-old founder and president of the NGO Safe Mothers, Safe Babies, worked with Stachel to bring 20 solar suitcases to Uganda in 2011.

“The solar suitcase is life-changing for women,” Cutts, a nurse, tells PEOPLE.

Stachel recently launched a new initiative, Light Every Birth. The goal is to raise millions to fund Solar Suitcases for every public health center in five countries in five years.

“We believe every woman has the right to safe childbirth,” Stachel says. “We have the technology. We have the capacity. We have a solution. If we join hands together, we can literally light every birth.”