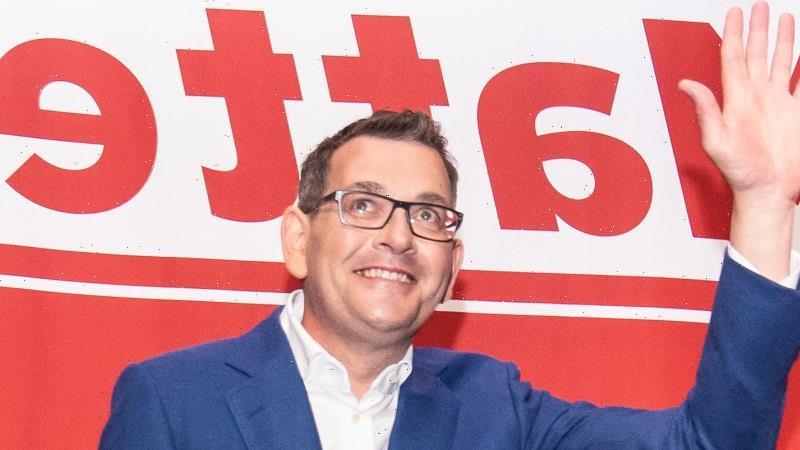 If you’re in a marginal, or highly contested, seat this Victorian election you’re likely well aware of it.

With just one week until polls close in Victoria, parties and candidates are hammering voters with ads appealing for their vote. 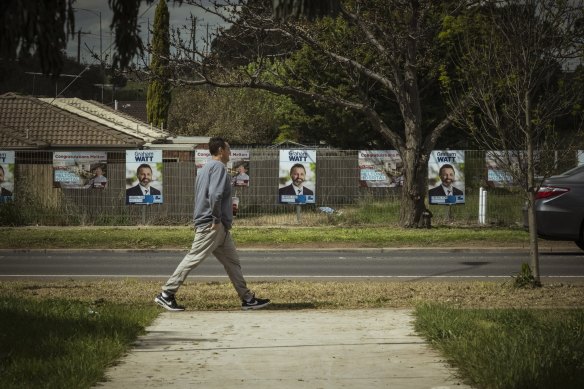 Yes, there’s the high-profile and costly promotion of the party leaders and their attack ads through usual methods where people across the state get the same pitch. But there’s also highly localised campaigns being fought and aimed squarely at voters in marginal seats.

Voters in these places will still see corflute signs around their neighbourhood and pamphlets in the letterbox, but they’ll also, increasingly, have their local candidate turning up in their Facebook and Instagram feeds. They might see them while they wait to watch videos on YouTube or get a ping from a direct text message.

Advancements in locational targeting on social media mean those messages can be tailored specifically to a candidate or issue.

United States department store pioneer John Wanamaker is once meant to have said: “Half the money I spend on advertising is wasted; the trouble is I don’t know which half.”

Social media companies claim they’ve solved this problem, by allowing for hyper-local marginal seat campaigns, where hundreds of thousands of dollars can be spent targeting voters in very specific ways.

Brent Hodgson, campaign manager for the teal candidate for Hawthorn, Melissa Lowe, says social media advertising has upended traditional political campaigns because candidates can target the voters they want to get their message to.

The spending in the federal contest for Kooyong set new standards for local social media spending as teal independent Monique Ryan and Josh Frydenberg, at that time the federal treasurer, spent hundreds of thousands of dollars on Facebook alone. 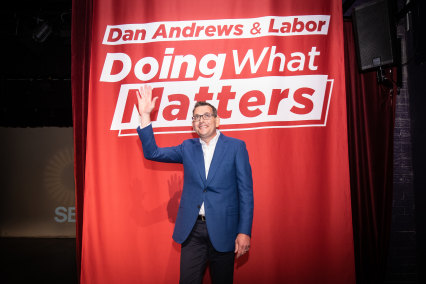 Expect to hear the “doing what matters” slogan a lot between now and election day.Credit:Scott McNaughton

Hodgson says if “the ideal demographic” being targeted is women between the ages of 30 and 50 in an electorate, “with social media advertising, rather than wasting money running ads that get seen by everyone, you’re able to target just that demographic”.

Overall, Victorian Labor has dropped the most cash on social media advertising at this election: the party has spent close to $500,000 on Facebook and Google advertising already in the leadup to the November 26 election.

Across the state, Victorian Labor spent $217,839 on Facebook advertising between August 15 and November 12 – more than the Victorian Electoral Commission ($173,486), which runs the election. The Victorian Liberal Party came third, with $135,954.

Climate 200, which is bankrolling teal candidates, has spent $102,550 across Victoria, mostly on ads attacking Matthew Guy and the Liberals.

A recent advertisement promoting four teal candidates was focused on attacking Labor for its taxpayer-funded support of VicForests, and of VicForests for logging habitat areas and its financial losses.

Labor also spent $246,000 on Google advertising between August and the middle of November, dwarfing the Liberals’ $138,000.

In some individual seats, some candidates are outspending their rivals by large margins. We’ve analysed political advertising in three key marginal seats – Hawthorn, Richmond and Melton – to understand where ad money is flowing and why.

John Pesutto, the former Liberal MP hoping to reclaim Hawthorn from Labor’s John Kennedy, was the biggest spending candidate among the three electorates. He spent just shy of $21,000 on Facebook ads, which he started making as a candidate in January this year.

His use of ads was sporadic at first, Pesutto began campaigning in December 2021, but his first Facebook payment to boost his Liberal candidature for Hawthorn happened in March. Payment to promote the post was repeated in May and the second week of June.

By late June the frequency of ads had sped up, and Pesutto was promoting regular listening posts, and local issues, such as graffiti removal and the disrepair of platforms one and two at Canterbury railway station. “The state of this is probably the worst platform I think I’ve ever seen,” Pesutto says in the roughly produced “selfie” clip, which has been viewed 23,000 times.

In contrast, Labor’s John Kennedy spent less than $2000 on Facebook ads, and his one video during the campaign is a slick production made by the Labor Party, authorised by head office, and finishes with the MP selling himself hard as “an advocate with a proven record of delivering for Hawthorn”. The video has been shared twice; one of the shares was by his electorate officer.

If Pesutto’s Facebook ads have a theme it’s infrastructure – whether transport or education – and the cost of living, along with a general emphasis on him and his role as a “community candidate”.

In a sign of how contested Hawthorn will be, the second biggest spend – in the period to November 12 – was Hawthorn teal candidate Melissa Lowe. Despite her page having just 88 followers, her campaign has spent more than $20,000 on targeted Facebook advertising.

While some ads focused on forestry and the logging of native forests – an issue her campaign is focused on – more have been about brand building and encouraging volunteers.

Tom van Laer, a professor of narratology at the University of Sydney, said the amount of money spent by political candidates on social media was trifling compared to what was previously needed for television or radio ads.

“You often have a deal where you pay for views, which of course with TV you can’t do. Social media can actually tell you ‘OK, this is what has been seen’,” van Laer said.

And he said political advertising on social media that was “rough and ready” – such as Pesutto’s on Canterbury station – often fared far better than slick productions made by campaign teams.

“Something that’s quirky or funny or just not incredibly well done on social media, you might share that, because it makes the person who shares it look good.”

Lucas Moon, the Liberal Party candidate in the three-cornered contest for Richmond, is also a demonstration of this.

His most savvy advertising during the campaign has been a YouTube video that has had 15,000 views. The same clip caught 22,000 views on TikTok.

In the video, Moon comes across as a political outsider; someone who’s genuine, and can’t be managed by political minders. He’s portrayed as a down-to-earth, genial everyman who is, nonetheless, is an effective operator in his own right.

He has spent $8250 on Facebook, and there are four separate accounts bearing his name that have put targeted ads out. 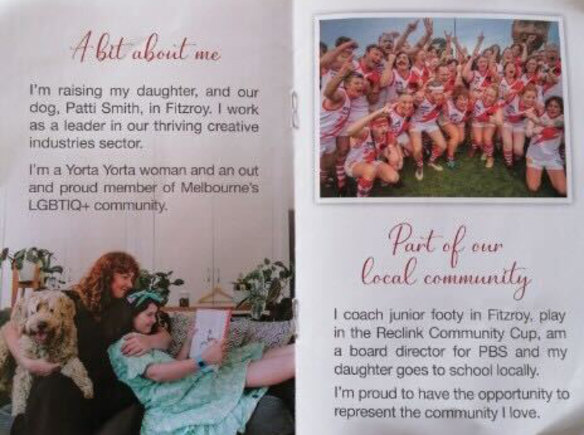 But investment isn’t the only measure of success. O’Dwyer had some cut-through with an unusual pamphlet, with a photograph of her as a child on the cover, titled “Introducing Lauren O’Dwyer, Labor’s candidate for Richmond”.

Inside the booklet she is fully grown, cuddling her daughter and their dog on a couch. Beneath the title “A bit about me”, it reads: “I’m raising my daughter, and our dog, Patti Smith, in Fitzroy. I work as a leader in our thriving creative industries sector. I’m a Yorta Yorta woman and an out and proud member of Melbourne’s LGBTIQ+ community.

“I coach junior footy in Fitzroy, play in the Reclink Community Cup, am a board director for PBS and my daughter goes to school locally. I’m proud to have the opportunity to represent the community I love.”

Her Facebook page has also come under sustained attack from activists, including from the Yorta Yorta community, questioning her Aboriginality and demanding evidence of her ties to the community. Her team has taken to deleting comments on her Facebook page – a demonstration of the downside to social media prominence. 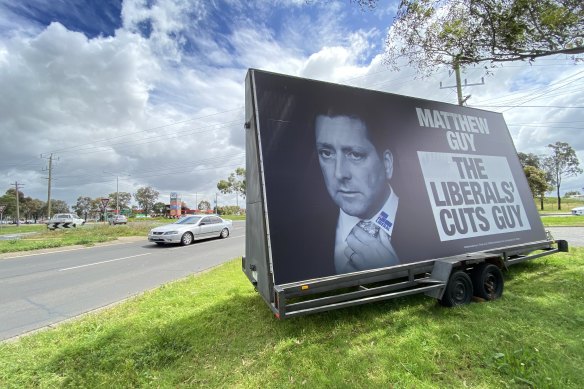 Compared to inner-city seats, Melton has received a much smaller proportion of ad spending, despite the seat being earmarked by Labor as a target seat at risk of being lost for the first time in 30 years. 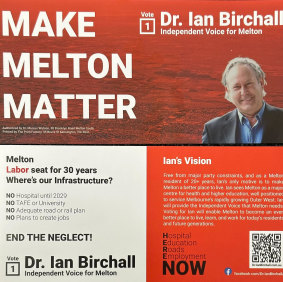 Incumbent Labor MP Steve McGhie has outspent his rivals in the outer western seat, dropping $4144 on Facebook ads in the past three months.

But big spending isn’t always a prerequisite for success. Birchall came within 700 votes of winning the seat last election with an overall budget of $8000, which included printing pamphlets and making signs.

The advertising language used in this electorate echoes hyper-local issues centring the idea that Melton has been neglected.

While much of Watt’s signage features classic Liberal branding with the colour blue and photos of Matthew Guy, his best-performing paid Facebook posts have hammed up his credentials as a candidate who lives in the electorate (he moved there in January).

His best-performing paid post are a low-fi photo of himself with his dog at local Navan Park and with the very recognisable yellow Mini he drives around in.

Residents in the past week have also been peppered with text messages from Watt and independent Jarrod Bingham, a local snake catcher.

Premier Daniel Andrews is not prominent in McGhie’s advertising, which focuses on infrastructure, such as new schools, the forthcoming Melton Hospital and level crossing removals.

Some advertising promotes McGhie’s credentials as a former paramedic and head of the Ambulance Union with the slogan: “A paramedic in parliament”.

Melton also has a vast array of “Matthew Guy the Liberal cuts guy” advertising, including mobile billboards and on phone boxes – while the same ad has been discontinued on Facebook.

This story is part of our in-depth local coverage of the key seats of Melton, Hawthorn and Richmond at the November state election.