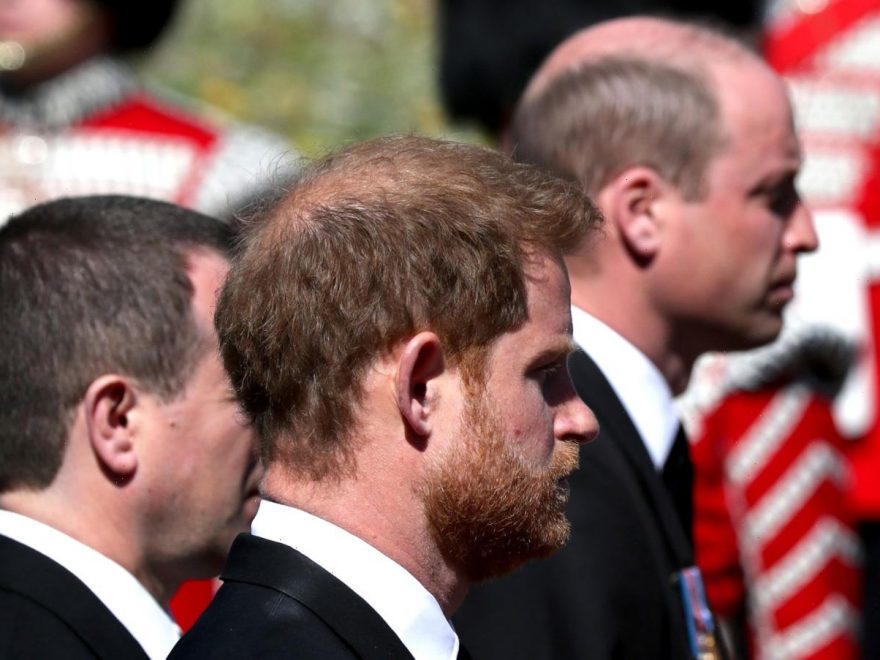 The funeral of Prince Philip on April 17, 2021, was a simple, beautiful, and dignified affair — exactly the way the Duke of Edinburgh wanted it to be. Personal touches — such as Queen Elizabeth’s final letter on his coffin, the song that was also played at Princess Diana’s funeral, and a thoughtfully chosen floral wreath from Prince Harry and Meghan Markle — all reflected the royal family’s love and devotion to the duke.

The funeral also marked the first time that Princes William and Harry had been together since the Sussexes moved to California. Their “Megxit” and the subsequent Oprah interview resulted in a fallout between the once-close brothers. In order to avoid any possible unpleasantness during the funeral, careful attention was paid to make sure that the princes would be separated during the procession and that they would be seen as equals within the family.

Coverage of the service included a live broadcast from CBS, hosted by Gayle King. Her running commentary included remarks about the two estranged princes. “William and Harry, there’s no secret about this, have had a strained relationship, you could say, since Harry stepped away from his royal duties,” she said (via the Daily Mail). But, she added, they both know better than to let their feud mar such a solemn state occasion. “[A]t the end of the day, this is a family that’s grieving,” said King. “I would suspect all of the family differences would be set aside for the day.”

Some viewers took issue with the CBS host

Gayle King also told Vanity Fair editor Tina Brown that there might be a little too much speculation about the meaning of William and Harry’s gestures and stances during their grandfather’s service. “Are we reading too much into the body language?” she said. “They didn’t stand shoulder to shoulder when their mother [Princess Diana] was buried. This was by the queen’s design.” (Indeed, Buckingham Palace told Us Weekly in a statement that the decision to separate the princes was a “practical” one and “represent Her Majesty’s wishes as well as the personal wishes of The Duke.”)

While millions watched the service, not everyone was pleased at CBS’s choice of host. While King is a major morning star for the network — she co-hosts CBS This Morning — she’s also good friends with both Oprah Winfrey and Meghan Markle. She sided with the Sussexes as they alleged racism within the palace in their interview. Viewers thought that having King lead the commentary was inappropriate in light of the Oprah interview and the trouble it stirred up within the royal family. The Daily Mail reports that some royals fans clapped back at King, telling her to “show some respect.”

King also caught heat for an interview she conducted with a CBS correspondent immediately after Prince Philip’s death. She asked, “Was it natural causes?” which drew gasps and snarks about why anyone would ask that about a 99-year-old man who had recently been ill (via the Daily Express).