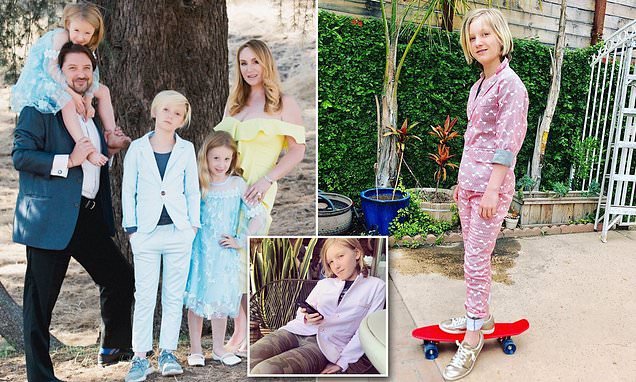 A mother who has taken credit for ‘inventing’ the gender reveal party more than a decade ago has denounced them, revealing that her baby is now a 10-year-old girl who wears suits.

Jenna Karvunidis, 39, from Pasadena, California, took to Facebook on Thursday to share a recent family photo while admitting that she has ‘a lot of mixed feelings’ about helping spawn the gender reveal craze.

The High Gloss And Sauce blogger explained in her candid post that someone on Twitter recently remembered that she came up with the idea of throwing a gender reveal party 11 years ago when she was pregnant with her eldest child Bianca. 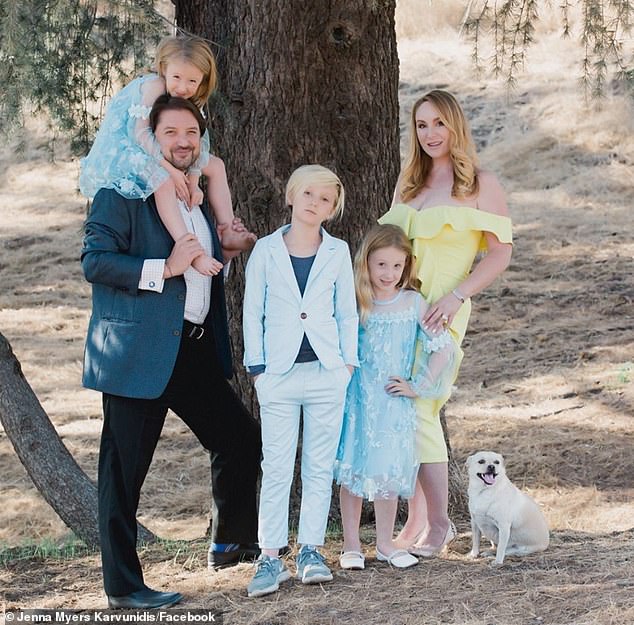 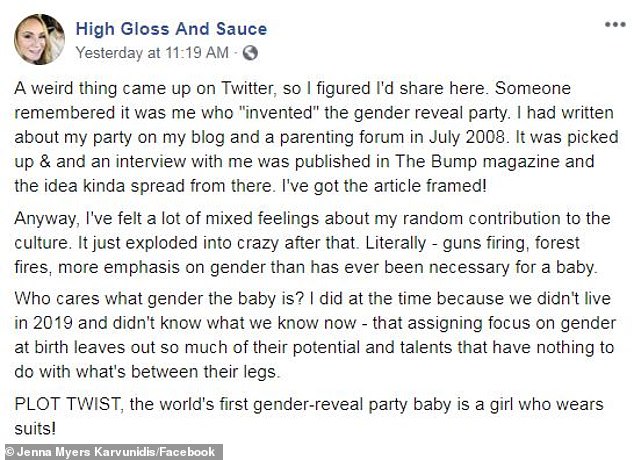 Candid: The mother of three opened up about her thoughts on the gender reveal craze in a Facebook post she shared on Thursday

According to Jenna, the whole thing started after she wrote about her party on her blog as well as a parenting forum in July 2008.

‘It was picked up and an interview with me was published in The Bump magazine and the idea kinda spread from there. I’ve got the article framed!’ she said.

‘Anyway, I’ve felt a lot of mixed feelings about my random contribution to the culture. It just exploded into crazy after that. Literally — guns firing, forest fires, more emphasis on gender than has ever been necessary for a baby.’

‘Who cares what gender the baby is?’ she continued. ‘I did at the time because we didn’t live in 2019 and didn’t know what we know now — that assigning focus on gender at birth leaves out so much of their potential and talents that have nothing to do with what’s between their legs.

In the photo that she shared, Jenna’s two youngest daughters, Stella and Greta, are wearing frilly blue dresses while Bianca — who goes by Bee — looks as cool as can be in a light blue suit and sneakers.

Jenna’s post has been shared more than 5,000 times, and hundreds of Facebook users flocked to the comments section to praise her for making an argument against gender reveal parties in this day and age.

‘This is wonderful! We didn’t have a gender reveal because popping a balloon full [of] orange glitter with the words “gender is a construct” inside would have just confused the grandmothers,’ one person wrote.

Lookalikes: The mom’s post has been widely praised, and many fans gushed about Bee’s killer suits (right). A few people even compared her to androgynous icon Tilda Swinton (left) 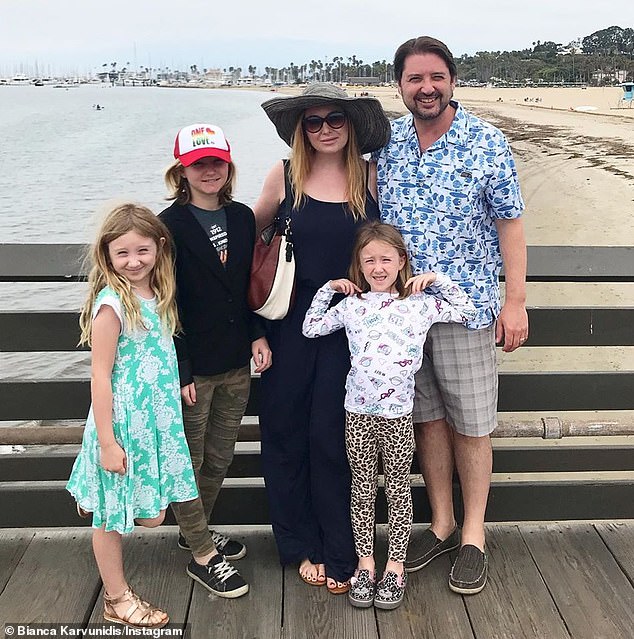 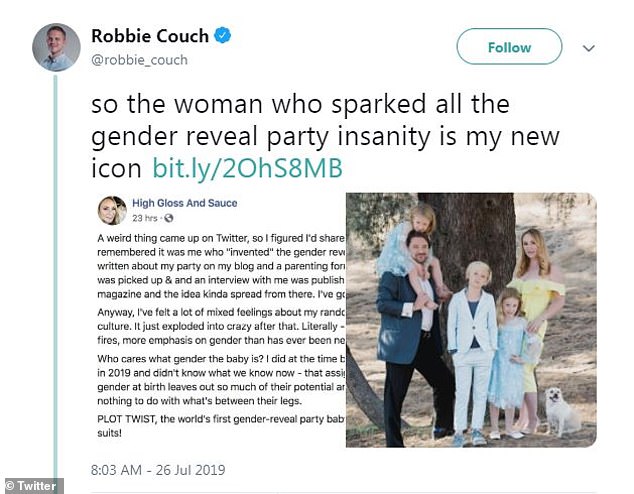 Spreading the word: Writer Robbie Couch shared screenshots of Jenna’s post on Twitter on Friday, and plenty of people took to the comments to praise the mom for her new stance

‘Love, love, love!’ another added. ‘Thank you for the courage to update the world. Bravo to your child for being their true, authentic self, and bravo to you for finding the courage and love to support this.’

Writer Robbie Couch shared screenshots of Jenna’s post on Twitter on Friday, writing: ‘So the woman who sparked all the gender reveal party insanity is my new icon.’

The viral post was widely praised, with many people gushing over everything from the mother of three’s new stance on gender reveals to Bee’s incredible androgynous style.

‘Wow we have to stan!’ one person commented.

‘This is so cool! Hope everyone who is considering a gender reveal party (stupidest thing ever) reads it and reconsiders. Good for her for writing this,’ another added.

‘Tilda Swinton, meet the only human that might just be cooler than you,’ one Twitter user wrote.

‘She actually is Tilda Swinton’s next incarnation, and before you note that she isn’t dead yet, Tilda Swinton is not bound by such concerns as linear time,’ someone else tweeted.