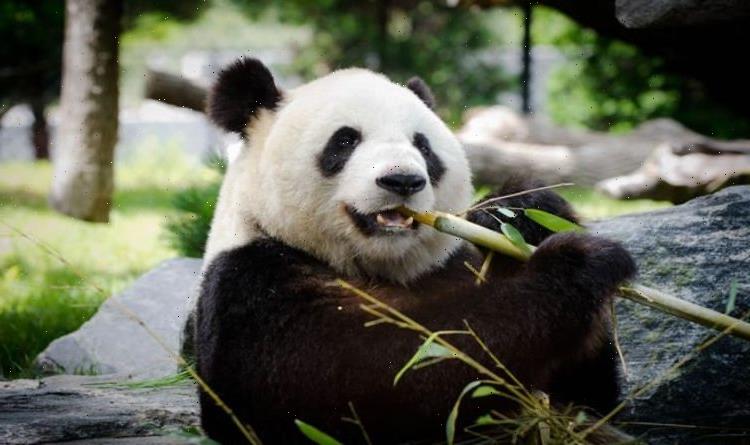 Giant pandas’ status has been downgraded from to ‘vulnerable’ after conservation efforts helped their population increase by almost 20 percent in the last decade. Chinese officials confirmed that there are at least 1,800 giant pandas living in the wild, however China maintains that the animals are still under serious threat and the new classification should not halt efforts to increase panda population.

Pandas were first listed as endangered in 1990 but more than 30 years of conservation efforts has helped their population.

China puts the success down to expanding habitats and replanting and repopulating bamboo forests.

Bamboo makes up 99 percent of a panda’s diet and they can spend 10 to 16 hours a day feeding on it.

Breeding programmes within zoos have also helped to increase the panda population.

Cui Shuhong, director of the Department of Nature and Ecology Conservation under the Ministry of Ecology and Environment, said that the latest classification developments “reflect [pandas] improved living conditions and China’s efforts in keeping their habitats integrated”.

China has sent pandas to zoos around the world including to the UK, Germany, Denmark and Russia.

Two were sent to Edinburgh Zoo in 2011- Tian Tian and Yang Guang- who celebrate their 18th birthday this year and are yet to successfully mate.

China’s classification change comes five years after the International Union for Conservation of Nature (IUCN) reclassified pandas as vulnerable in 2016.

China initially disapproved of the move over fears the change may lead people to believe that conservation efforts should be relaxed.

Pandas play a crucial role in protecting the environment as they keep their mountain forests healthy by spreading seeds in their droppings which helps vegetation to thrive.

A panda habitat is important for local people- for food, income and fuel for cooking and heating- and also for other endangered species including golden snub-nosed monkeys, takins, red pandas and snow leopards.

Wild giant pandas could once have been found throughout eastern and southern China, northern Vietnam and northern Myanmar. Now the pandas range is restricted to just six isolated mountain ranges in Gansu, Shaanxi and Sichuan Provinces in south-central China.