Jackson Avery bid farewell to Seattle in his very last episode of ‘Grey’s Anatomy’ on May 20. At the end of the episode, another character decided to leave and join Jackson in Boston.

Meredith is passing all of her lung tests with flying colors. She’s so close to going home. Bailey and Richard know they’re going to eventually have to tell Meredith about Deluca’s death, but they decide to hold off a little longer. After some happy news for once, Teddy and Owen celebrate — by having sex.

Jackson hands in his resignation to Bailey and Richard. He thanks them for all they’ve taught him over the years.”I learned the kind of surgeon, the kind of father, the kind of person I wanted to become from you. I’m always gonna be grateful for that,” Jackson tells Bailey and Richard. When Jackson walks away, that’s when Richard realizes that Jackson is now their boss. Jackson begins to say his goodbyes. He talks with Jo one-on-one. He thanks her for being a good friend and for the good sex.

Richard, Bailey, and Maggie update Meredith on what’s been going on while she’s been battling COVID-10. Winston and Maggie are getting married, Winston signed a 5-year contract at the hospital, Jackson’s moving to Boston. Meredith wonders if there are “any other tragedies” she should know about. Richard and Bailey still don’t tell her about Deluca.

Jackson stops by Meredith’s room to chat with her. Meredith realizes that she’s the “last man standing.” She and Jackson were the only two left from their residency class. Everyone else has either died or abandoned her. Meredith’s not looking forward to everyone cheering her on when she leaves the hospital. She thinks she should be applauding the doctors and nurses who kept her alive. “This place almost broke with you sick,” Jackson says. They both agree that they don’t want this to be their big goodbye. 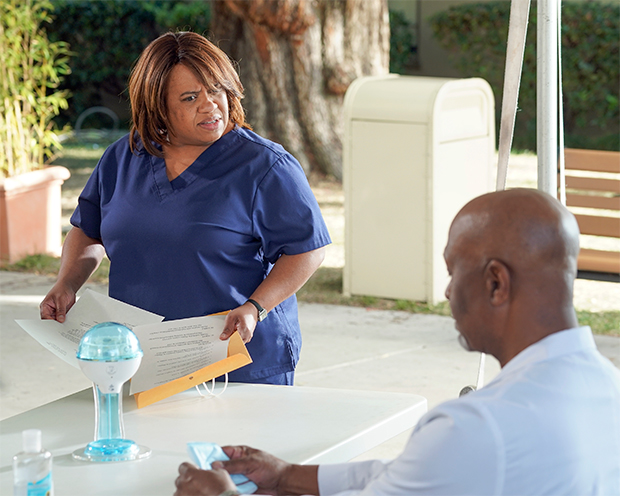 Jo works with Carina on her first day as an OB-GYN resident. Carina tells Jo that she’s going to Italy to scatter her brother’s ashes. Jo makes sure to tell Carina that Deluca was “incredibly kind” to her.

The staff is ready to cheer for Meredith when she leaves the hospital, but Meredith is nowhere to be found. Jackson’s her getaway man. He takes her home to see her kids without all the fuss. As everyone else is heading home, Richard stops Maggie and Winston to talk about the wedding. While Maggie’s father is going to walk her down the aisle, she wants Richard to officiate the wedding. “It would be the honor of my life,” he says.

When Meredith walks through the door of her house, her kids immediately run to her. Amelia tears up seeing Meredith alive and healthy. Later, Meredith thanks Amelia for holding down the fort while she was sick. 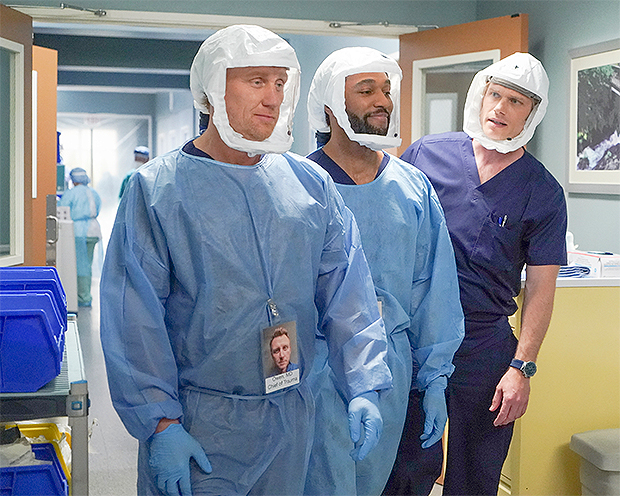 Tom meets up with Jackson to tell him how impressed he is about Jackson taking over the foundation. Tom opens up about how he lost several roommates to COVID-19. “I was the only white guy. I just felt like I owed it to them to be better,” Tom tells Jackson. “Let me become worthy of being spared. I want to be an ally.” Tom doesn’t want money or titles. He just wants to help. Jackson tells him to be in Boston on Monday morning.

The episode ends with Jackson taking one last look at Grey-Sloan, the place he became the doctor he is today. This isn’t the end. It’s just beginning. Goodbye, Jackson Avery. We’ll see you again soon.