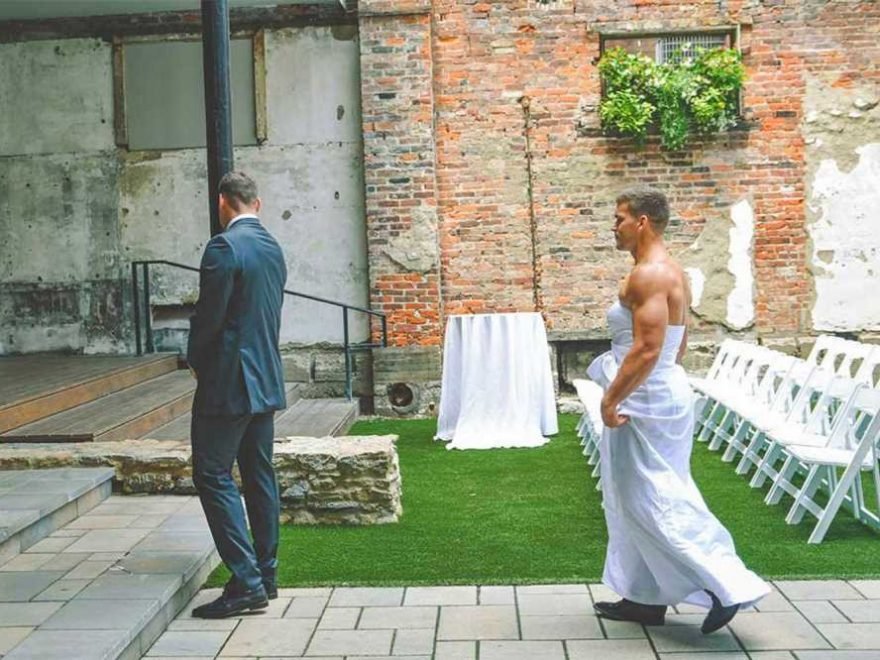 Here comes the bride . . . all buff and ripped?

A Kentucky groom was given the shock of his life when his jokester bride-to-be sent his best man stuffed in a white wedding gown down the aisle in her place for their “first look” photos.

Logan Martin was eagerly awaiting a view of his bride, Megan Martin, last month when he turned to find his chiseled buddy, Ryan Sowder, in a tasteful tube-top dress instead.

“I was building with anticipation the whole time I was outside waiting for Megan,” said Martin, who told Fox News he was waiting five minutes before Sowder showed up. “When I turned around and saw Ryan, I couldn’t help but to double over with laughter. Seeing your best man in a wedding dress is not a situation you can be prepared for.”

Megan had recruited Sowder before their July 19 nuptials to help prank her fiancé.

“When Megan asked me to do this prank on Logan there was no way I could turn it down,” Sowder told Fox.

Their comical antics paid off in spades and caught Martin totally by surprise.

“I was completely shocked,” admitted Martin, who was dressed in a dark blue suit.

“It was awesome!” Exclaimed photographer Kristina Herman of K. Herman Photography, who documented the scene.

The two best friends then shared a loving embrace.

Though Martin was relieved to eventually see his true bride walk down the aisle, he said Sowder shouldn’t be so quick to ditch the dress.

“All in all, I think he wore the dress well,” Martin joked.