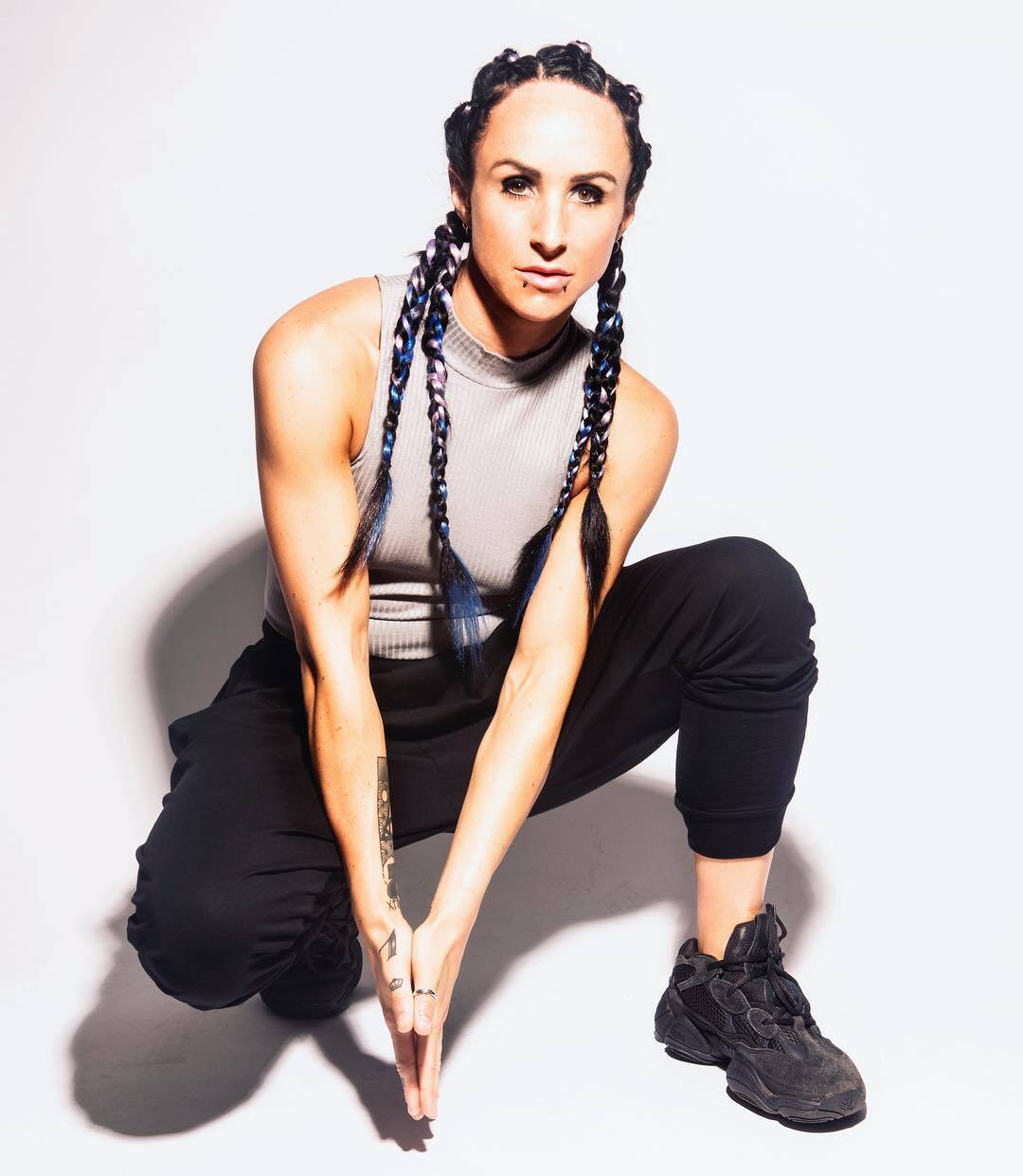 The touring life of a world-class DJ is an exhausting endeavor, often fueled by alcohol and other substances you might find in a night club. When they’re not performing, they’re usually traveling on their own or holed up in a hotel room.

While the lifestyle can be glamorous, it can also be taxing, stressful and unhealthy. Especially in dance music, there’s pressure to constantly churn out singles rather than take one’s time with an album. Then, you have to tour to promote those singles. Weekends are for performing, and weekdays are for producing. The cycle continues.

For many years, that was no different for British DJ Hannah Wants (real name: Hannah Smith), who rode her bouncy take on garage house music to wide acclaim.

“I’d go to America and tour 10 dates in a row, and some of the nights I wouldn’t be sleeping,” Smith told AOL. “And I’m one of those determined people where I’d just plow through anything, because work came first.”

That is until she got the wake-up call of a lifetime.

Smith was diagnosed with breast cancer in March 2017 at age 30.

It was a shock to the system for the Birmingham native, a former England women’s national soccer team player who felt she was relatively fit. It changed her outlook on just about every aspect of her life.

“I was one of those people who thought it’d never happen to me,” Smith said. “I thought I was healthy, I was living my dream and I was happy. So as you can imagine, it sort of turned my world upside down.”

It’s exactly 18 months to the date I found out I had breast cancer.I DJ’d at my U.K. tour date in Cardiff that very night and in Bournemouth the next day. On March 14th I had surgery and I completed my U.K. tour in Birmingham on March 18th – yes I was very sore the next day!Although I DJ’d and danced like I was happy and fine the reality was my world had just turned upside down… *SWIPE RIGHT* Pt. 1.

Despite the diagnosis, Smith didn’t feel ill. So, after she underwent surgery, she decided to take a more holistic approach to her treatment instead of undergoing recommended chemotherapy treatments that would have likely kept her bedridden for long periods.

Smith hired a private nutritionist who frequently tests her blood and urine to examine her hormones, cortisol levels, kidney and liver function, glucose metabolism and other critical health information. Those measurements are used to adjust the 15 or so daily supplements she takes.

She also now (mostly) adheres to an organic, plant-based diet and has incorporated acupuncture, yoga, meditation, CBD oil, thermography and an alternative method of “energy healing” called reiki into her routine.

“The diagnosis sent me on a more spiritual path,” Smith said. “It’s actually been a tap on the shoulder to say I couldn’t have kept doing what I was doing … Sometimes you need something shocking to make you re-evaluate your life, and that’s exactly what it did.”

WHO WANTS SOME GUEST LIST? I kicked off my What Hannah Wants tour in Belfast and Dublin last weekend and it’s safe to say the bar has been set highhhh! Proper mega weekend, big love to everyone who came to dance with me. Every date on the tour has sold out (tell a lie – London has 20 tickets left) and I’m inundated with “are you putting any more tickets on sale for XXX date?” and “if i gets 2717638 retweets can I get on your guest list?” SO… if you missed out on getting tickets and wanna come join the rave, just comment below and include the CITY you wanna party in. I’ll max my guest list out for each date. Surrey, Southampton, London, Newcastle, Leeds, Swansea, Cardiff, Bath, Brighton, Dundee, Aberdeen, Lincoln and Birmingham… I’ll see you soon! ? #WhatHannahWants

From -2 snow, igloos and mountains in Austria to 34 degree sunshine, coconuts and the beach in Dubai.Playing Penthouse tonight 12.30am-2.30am then heading to Singapore at 6.30am, pray for me. I appreciate the madness that is life I do. ?

They say if you love what you do you’ll never work a day in your life. I loveeeee this picture… Music is crazy powerful man, it has the power to unite and bring smiles to faces. Events are where people go to be care free and enjoy this funny ting called life and you can bet ya bottom dollar I ain’t ever taking my ‘job’ for granted.? credit: @soulmediauk

OUT OUT. ?️‍? ————————————————————————Portsmouth bound to play at South Central Festival 4pm-5pm then I’m heading back to my hometown to play at Pride 9pm-11pm where for the last hour (at least) I’m gonna play a special one off Birmingham Classics set, all of those bassline house and speed garage bangasss from back in the day and where for me it all began. It’s gonna be a trip down memory lane and I. AM. HYPED. Pass me the tequila. @birminghampridefestival @southcentralfest

True happiness is appreciating the simple things, the real things in your life. Today’s been bloody beauuuuuuutiful! ?

i proper love life i do.

Out here raising my vibration in paradise cos’ its true what they say… the best project you’ll ever work on is you.

Another year of life and another year of living in the bag. When your own little existence hangs in the balance and the reality of health, diet, lifestyle and disease hits for a hot minute you don’t fear getting older, you appreciate it. Solo sober birthday vibes for me today cos I’m on tour on my one butttt I’m gonna go spend the day shopping and getting some vitamin D round L.A so ain’t no complaints over here still.Up Next

One of the most drastic changes to the former workaholic’s lifestyle is her touring schedule. Smith, who is currently doing shows in the U.S. for the first time since her diagnosis, no longer performs on more than 3 consecutive nights. It’s a radical step in a business that relies on profits from live shows now more than ever, but Smith also feels it’s a necessary one.

“I was obsessed with work and chronically stressed because of the pressure that I put on myself for years,” Smith said. “That’s what I actually believe was the main driver of the illness — stress.”

It’s a mindset that sounds distressingly similar to that of Avicii, the dance music icon who committed suicide in April 2018 after experiencing chronic stress and anxiety from nonstop touring. “There was never an end to the shows, even when I hit a wall,” the DJ said in “Avicii: True Stories,” a documentary about his life that was released before his death. “My life is all about stress.”

Thankfully, Smith makes sure to kick back during the week while touring now, whether that’s staying in bed for a couple more hours, catching some poolside rays in Los Angeles or visiting the hotel spa for a massage.

No matter which parts of her altered regimen did the trick, Smith is now cancer-free — and eager to continue her career’s upward trajectory.

Her new single “Love Somebody” samples the catchy hook from “Good Love” by Inner City and has the potential to pick up steam this summer in the dance music mecca of Ibiza, where she’s set to play seven weekends between July and September. After her last date there, she’ll return to Australia for the first time since her diagnosis to play several dates.

And by the end of the year, she’s hoping a track that’s in the works with American producer Kevin Knapp — whom she calls her dream collaborator in the studio — will be ready for release.

“It’s time to rebuild,” Smith said. “I’ve got lots of challenges and goals to work towards. So I’ll work hard, but rest hard as well.”

Here’s to hoping that other DJs learn to do themselves a favor and follow that mantra, too.