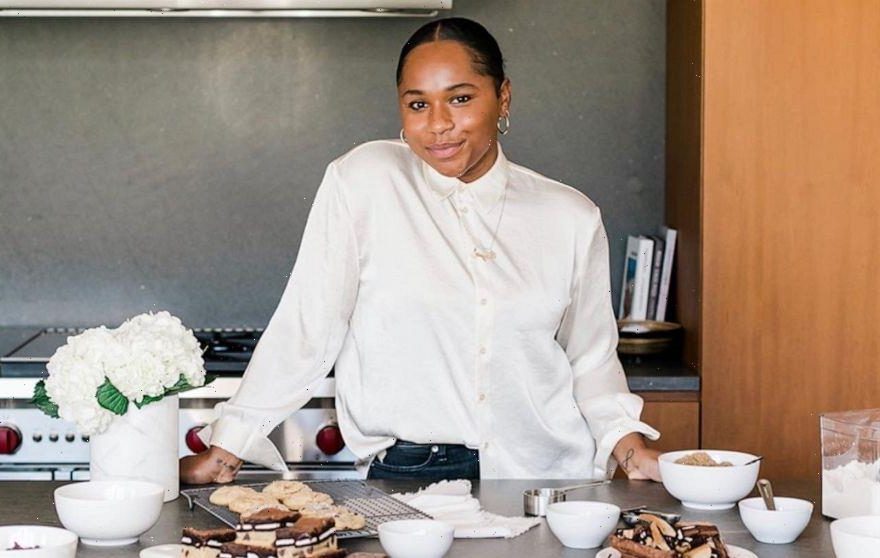 When Lara Adekoya started baking cookies at the start of the pandemic, she never anticipated that a year later, celebrities like Issa Rae, Jenna Dewan, Jennifer Love Hewitt, Melissa Benoist and Lena Waithe would be lining up to order from her Los Angeles business, Fleurs et Sel.

“What I’m doing is reaching beyond just the backyard,” Adekoya, 28, told “Good Morning America.” “It’s refreshing to have their support, because these are people that now know who I am, and they know that I make really great cookies.”

Her Hollywood clientele isn’t just limited to celebrities either. The business owner has catered to Amazon Studios, A24, the Oprah Winfrey Network, HBO’s “Insecure” set and, most recently, National Geographic. But even though Fleurs et Sel has quickly risen as a business that’s only a year old, its success is anything but a fluke — Adekoya said she hustled to make a name for herself.

I hope that my voice transcends communities and transcends different cultural groups so people know that we, as young Black women, we are capable of doing so many things.

“I’m customer-obsessed and social media-driven, and I use those skills to create community through my cookies,” the baker of Nigerian and Japanese descent said. “I hope that my voice transcends communities and transcends different cultural groups so people know that we, as young Black women, we are capable of doing so many things.”

Adekoya’s venture started when she was laid off during the pandemic as a designer shoes salesperson at Nordstrom. Like many Americans, the pandemic prompted her to reimagine her career goals. According to a survey by Prudential, 50% of workers admitted that the pandemic made them rethink their careers, and another study by Microsoft found that 41% of employees are considering leaving their current employer this year.

Despite the career change, Adekoya said her job at Nordstrom was invaluable to the success of Fleurs et Sel because of the work values and connections she built there.

“The key to me working in designer shoes was building relationships, because in order to be successful, my work was strictly commission driven, so it was up to me to make money — I wasn’t going to be there and not hustle,” she said.

Two important relationships she cultivated there were with female entrepreneurs Aderiaun Shorter and event planner Mindy Weiss, the latter who is known in Hollywood for throwing lavish parties for the Kardashians, Justin Bieber, Ciara and many others. When Adekoya started sharing her baking hobby on social media, her two former Nordstrom clients were the first to buy cookies and promote her. That’s when her idea for Fleurs et Sel really kicked off.

“I got a new entire following, and I was introduced to a new crowd that I would have never otherwise been exposed to,” Adekoya said. “Aderiaun and Mindy are both self-made women entrepreneurs, and they were both instrumental in mentoring me as a woman entrepreneur in this new space.”

“When I have encountered the celebrities, they too have shared their excitement and love for Fleurs et Sel on social media,” the baker said. “They are part of our online community, and they have helped strengthen and solidify our reach and success.”

Adekoya’s time at Nordstrom also came full circle when she was invited by Rick Caruso, the real estate mogul behind L.A.’s premiere shopping center, The Grove, to do a pop-up event right across from the Nordstrom where she used to work.

“They’ve had Lululemon, Yves Saint Laurent, they had Skims most recently, big names,” the businesswoman said. “They’re not housing just anyone, not anyone can just have a pop-up there.”

The pop-up event at The Grove was so triumphant, the event sold out in two hours.

“Hundreds of people were there for me and the cookies, and [Caruso’s team] was like ‘Whoa,’” Adekoya said. “It was the first day, and I had a line from the pop-up all the way to the valet, and I sold out in two hours.”

Selling out of popular treats like the bae bar or the vanilla bean sugar cookie might be easy for Adekoya, but creating the products comes with a lot of work and sacrifice. The baker said she’s no stranger to staying up past midnight or waking up at 4 a.m. to fulfill orders from her Culver City kitchen.

“It’s challenged me to be very organized. I have to be — I’m the only person behind Fleurs et Sel,” she said.

Adekoya has managed to thrive beyond the pandemic to establish herself as a legitimate force in the cookie industry. She’s working on two new flavors coming later this summer, including a vanilla chai cookie, and will continue expanding Fleurs et Sel.

“I’m a multicultural woman, and look at what I’m doing — and especially during this time, with all of these cultural and social movements, it is so amazing to have this much support and this diverse of an audience,” she said. “Everyone’s here for the cookies, but also to share in community.”