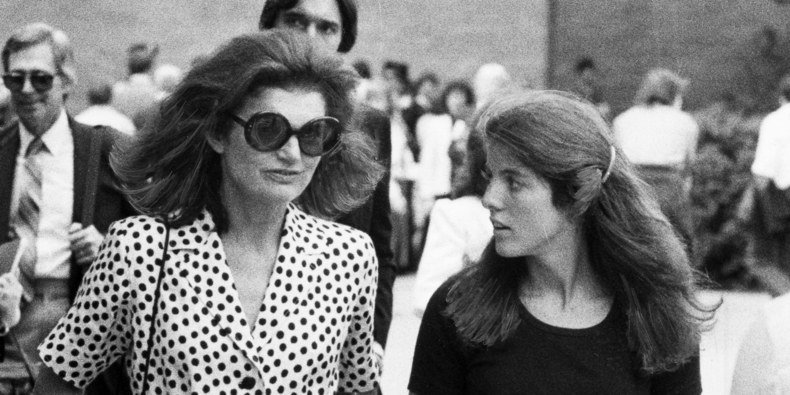 Looking for a beach house upgrade and got a cool sixty-five million dollars to burn? Then you might be interested in Red Gate Farm, the Martha's Vineyard Estate once owned by Jackie O and recently put up for sale by her daughter Caroline Kennedy. Listed with Christie's International Real Estate, the 340-acre property in Aquinnah, Massachusetts, has five bedrooms, five bathrooms, a pool, a library, and "solar energy." The surrounding area is almost all waterfront, as you can see from photos on the Christie's site, with views of the Atlantic and on the edge of Squibnocket Pond (which is just a delight to say).

After she purchased the land in 1979, Mrs. Onassis preserved the property's hunting cabin and enlisted architect Hugh Newell Jacobson to design the main house and guest house, while her friend Rachel Bunny Mellon (who had previously redesigned the White House Rose Garden under the Kennedy administration) designed the landscapes. The buildings were completed in 1981, renovated in 2000, and may be purchased by some Jeff Bezos-like figure in 2020. According to People, the original price Onassis paid was just a cool million. Ever thrifty, those Kennedys.

Red Gate Farm – The Jacqueline Kennedy Onassis Estate is a wild and beautiful oceanfront escape etched into the New England coastline. This serene and private 340-acre sanctuary at the edge of Squibnocket Pond on Martha's Vineyard includes over a mile of Atlantic Ocean beachfront. [ Represented by @landvestrealestate ]

In a statement, Caroline Kennedy said she and her family, who have vacationed at Red Gate over the past forty years, are "excited about the next chapter for Red Gate Farm.” She continued, “Forty years ago, my mother fell in love with Martha’s Vineyard. When she found Red Gate Farm, it was a perfect expression of her romantic and adventurous spirit…The dunes and ponds and rolling hills of Aquinnah gave her the chance to create a world where she could be so close to nature, close to her family and friends, and, most importantly, close to her beloved books…She even built a fairy treehouse for her grandchildren. Those grandchildren are grown so now it is time for us to follow my mother’s example and create our own worlds…We hope that a new family will treasure this place as we have for three generations.”

John F. Kennedy wearing sun tape on his nose on a docked boat with Robert F. Kennedy in Edgartown, Massachusetts during the Edgartown Regatta, July 1941.