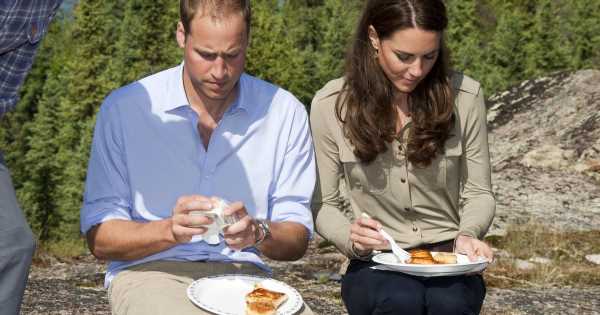 The Duchess of Cambridge spends her days running around after her three kids and doing important work with charities close to her heart.

She also does a lot of exercise and loves sport, so it's important that she eats all the right food to make sure she's got enough energy.

Despite having a palace full of staff including professional chefs, Kate is believed to be very hands on in the kitchen and often cooks the family's dinners.

Back in 2016, Kate and William joked about her cookery skills and the Duchess said: "William has to put up with my cooking most of the time."

Cheeky Wills then replied: "It's the reason I'm so skinny."

Kate's daily diet is said to be filled with fruit, vegetables and trendy healthy options, so we've had a look through some of the meals she tucks into when she's relaxing at home.

She's said to have followed the Dukan Diet, where you cut out carbs in favour of proteins, veg and healthy fats, in the past to help lose her baby weight.

Kate reportedly drinks a smoothie in the morning and the afternoon.

According to Mail Online , she blends spirulina, kale, matcha, spinach, romaine, cilantro and blueberries together for the healthy drink. Yum!

When it comes to her midday meal Kate loves salads and bowls of fruit.

She also tries to eat foods which help her skin, including lots of watermelon salads, gazpacho, goji berries, tabbouleh and ceviche.

A source said:"Kate already has the perfect figure but her motivation is to achieve radiant skin."

When it comes to dinners it sounds like the Cambridge family are quite traditional.

The couple reportedly make their own sausages at home.

Kate also gets George and Charlotte involved in the cooking and has told well-wishers they love helping out.

During a visit to Lavender Primary School  to mark Children's Mental Health Week earlier this year she said she was teaching them to make cheesy pasta .

Matthew Kleiner-Mann, chief executive of the Ivy Learning Trust, who had a chat with her during the visit, told  People : "She was telling us how much her children love cooking and how they cook for her.

"They made cheesy pasta the other day. One stirs the flour, one puts the milk and butter in. And they make salads and stuff.

"Food is important to her and she understands the links between mental health and physical exercise."

Most of us know what it's like to have a sugar craving at some point in the day, but rather than reaching for the chocolate Kate has a healthier alternative.

According to reports she enjoys berries mixed into almond milk.

Before starting her royal life Kate was often spotted popping into her local shop to pick up a packet of Haribo, and we hope she still enjoys them now.

The owner of her local shop, the Peaches Spar store in her home village of Bucklebury, Berkshire, said: @She came in with her mother and bought Haribos. She also bought French bread, ham, salami, cream and eggs, and her favourite mags, Hello! Tatler and Elle.

Kate has never been a big drinker, even during her student days.

One of her gap year friends Florence previously said: "She would like a glass of wine but couldn't really handle her drink. She’d get giggly and silly after a few glasses, so then she would stop.