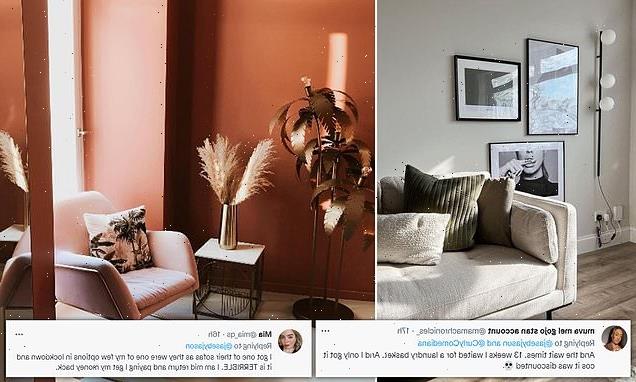 Inferior design! How Made.com went from THE must-have homeware brand among millennials to losing £773m valuation in just two years – as expert claims ‘long delivery times and poor quality’ are to blame

Creating trend-driven products at an accessible price-point, the business was a instant success story with millennial consumers and later expanded into France, Germany, Ireland, Italy, Switzerland, Austria, Spain, Belgium and the Netherlands.

When it debuted on the London Stock Exchange two years ago, Made.com was valued at an eyewatering £775m – following the launch of its innovative free virtual interior design service.

After being hit with global supply problems during the pandemic, the brand is now worth a meager £2m as it faces the fall-out of the cost of living crisis.

Earlier this week, Made.com announced they were no longer taking new orders from customers following a failed desperate attempt to secure an 11th-hour rescue bail-out.

Here Femail takes a look back at where it all went wrong for the cult favourite millennial brand, which is facing insolvency in coming days. 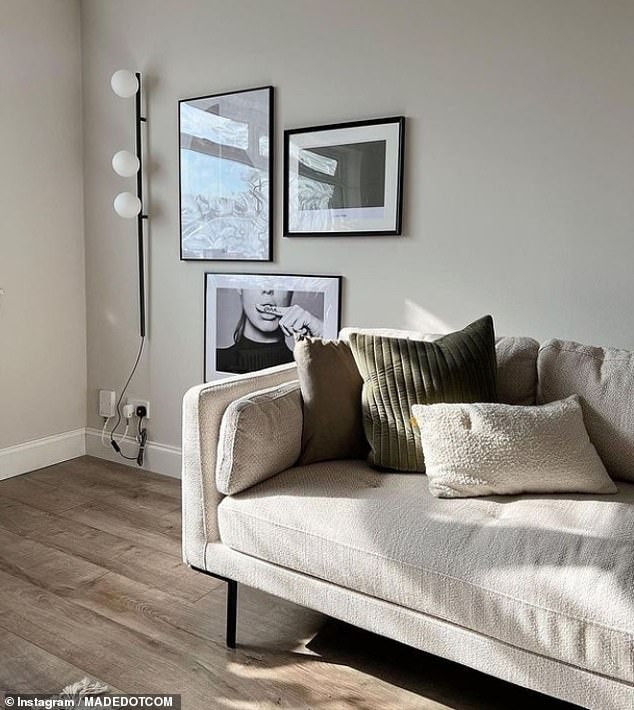 Furniture firm Made was valued at £775m on the London Stock Exchange in 2020. As of this week, the British brand is now worth £2m 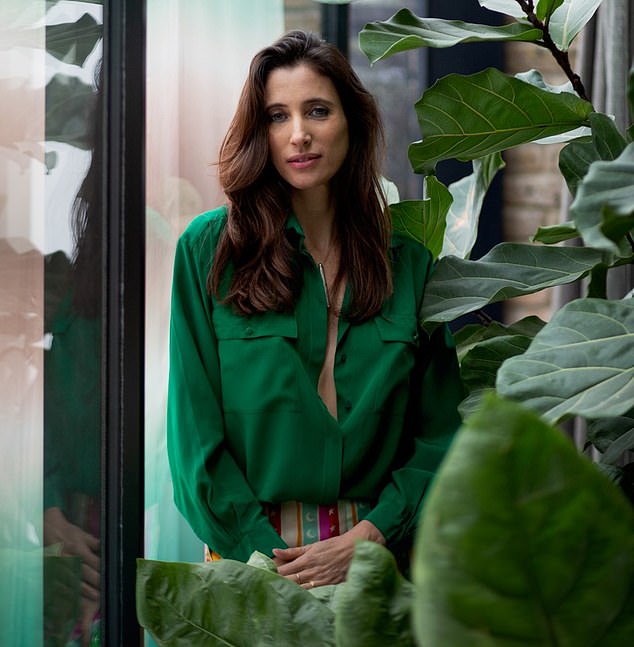 French entrepreneur Chloe Macintosh was part of the original team of founders who helped set up Made.com back in 2010. She was the creative director until 2015 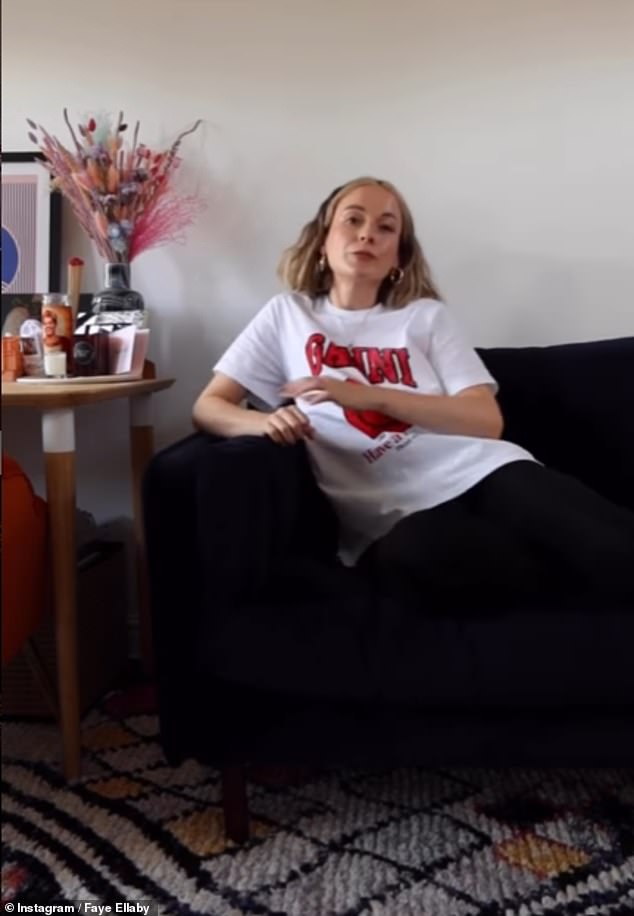 In recent years, Made started started an affiliate programme – which allows social media influencers to profit of sales driven by their accounts. Pictured: Influencer Faye Ellaby promoting the brand’s sofas

As a digital-first business, brand expert Nick Ede says Made.com was lightyears ahead of its competition with its swish website, easy-to-use app and their virtual interior design service – which gave customers free advice for creating their dream living space.

He explained: ‘Made very quickly became a very innovative place to purchase your furniture and homewares, with its nimble approach to providing customers with quality items at good prices it captured the zeitgeist of living in hotel-style homes that were Instagramable and gave people boasting power.

‘When it first launched it was a hit because there was nothing quite like it and the consumer felt like they were their own interior designer with clever ways of visualising the product in your homes using quick and easy VR tools.’

However, the brand expert says Made has struggled to stay ahead of its competitors in recent years – especially in terms of its long-lead times. 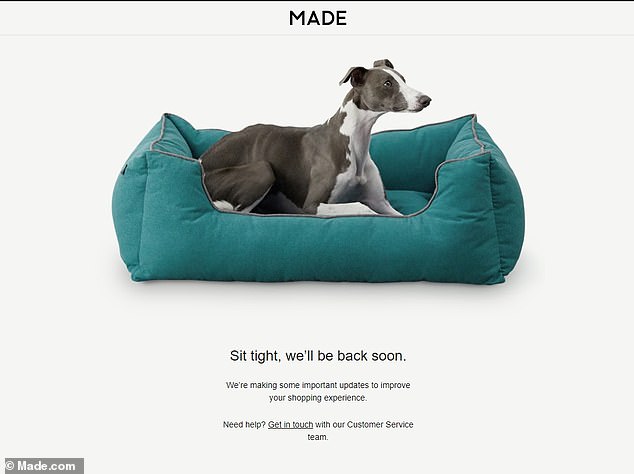 This was the message on Made.com for customers who tried to browse on the firm’s website on Wednesday morning 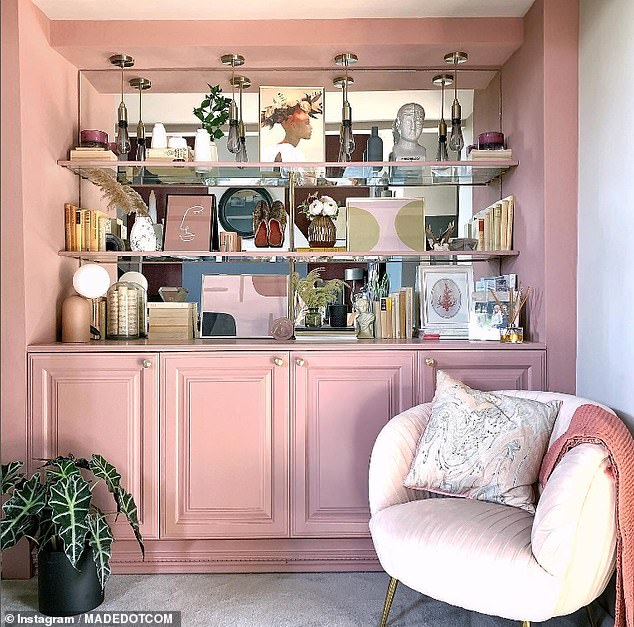 Brand expert Nick Ede said there was  ‘nothing quite like’ Made when it first launched in 2010, offering customers the chance to create an Insta-friendly look in their own homes (pictured)

A key part of the brand’s business model is to not over-produce their designs – meaning some customers have to wait up to 12 weeks for their items to arrive.

Nick continued: ‘The tides have changed in home furnishings and with competition so fierce from John Lewis and their successful every day range and also the frustration of having to wait weeks if not month for delivery the glow has come off the brand and it is losing money fast.

‘Our shopping trends have changed and many people are either re cycling, repairing or reupholstering their big home items.

‘The quality of product too has been reviewed badly in the past few years with complaints about comfort and also assembly being the top of peoples lists.’

For instance, several recent reviews on the brand’s £2,750 Scott four-seater velvet sofa complained about how  it arrived covered in ‘pen marks’.

Several recent reviews on the brand’s £2,750 Scott four-seater velvet sofa complained about how it arrived covered in ‘pen marks’.

One one-star review read: ‘Very disappointed with the quality – never had a sofa with large ‘patches’ of cheap brown material on the reverse of the cushions – so you can’t turn them around!

‘The seat cushions are awful – so soft which makes it uncomfortable to sit on very quickly! Such a disappointment for what is not a cheap sofa. The quality of the ‘velvet’ is not good and looks worn already in some places after only 3 or 4 months.’

What’s more, the brand expert said that Made’s lack of showrooms has played a part in its demise too.

He added: ‘Consumers are looking to try before they buy and need to feel the quality of the big money items for their home.

‘Brands like Loaf.com and Sleep8 are bucking the trend and opening up more stores in destination shopping centres like Westfield in London and Bluewater as more and more people want to feel their furniture which is something Made.com hasn’t allowed its customers to do.

‘Consumers either want to try or they will look for more bespoke contemporary brands like Huutt Home.’ 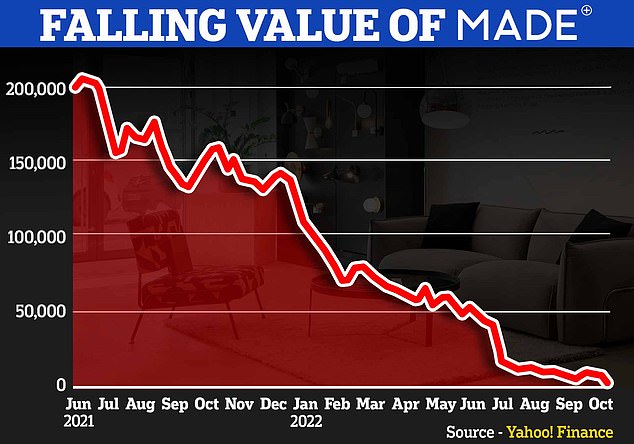 Shares dropped 93 per cent on the day, and are now down 99.7 per cent compared with where they were a year ago 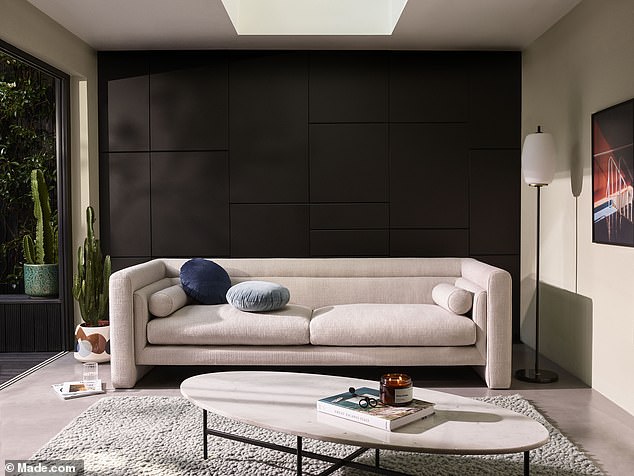 A desperate bid to bail the trouble furniture store out failed, with bosses saying the company is no longer taking any fresh orders. Pictured are items of furniture that had been on sale

In recent years, Made took notes from fashion brands and started an affiliate programme – which allows social media influencers to profit of sales driven by their accounts.

Admitting that it was a ‘clever’ idea, Nick says the approach didn’t guarantee a reliable stream of income.

He added: ‘Unlike clothes, household items like sofas and wardrobes are not fast fashion so you don’t have repeat buyers of the same things so it’s harder to create repeat buying patterns.’

On top of this, the brand expert says consumers are being ‘more mindful’ with their spending and are no longer interested in mindlessly chasing fast fashion homeware trends every season.

Nick concluded: ‘With TV shows like The Repair Shop and TikTok tutorials showing us how to upcycle furniture, shoppers are now aware that furniture is something that can increase value in future – unlike the products Made sell.’

The dot com pioneer, the author of teen sex guide and the serial entrepreneur: the people behind Made.com

Made.com is in a financial crisis following the collapse of a last-minute effort to try and rescue the struggling furniture firm. But it wasn’t always so gloomy for the company, which began promisingly in 2010 with its ambitious founders once hoping to make the firm ‘the next Ikea’. Here, MailOnline looks at some of those behind the online furniture firm’s origins

Chloe Macintosh:  The French entrepreneur was among the first team to set up the company and was a key driving force behind the company’s creative team and stepped down as its creative director in 2015.

But since leaving, she has raised eyebrows with some of her other ventures, which last year included creating a ‘First Time Sex Starter Kit’ with her 16-year-old son to help teens lose their virginity. 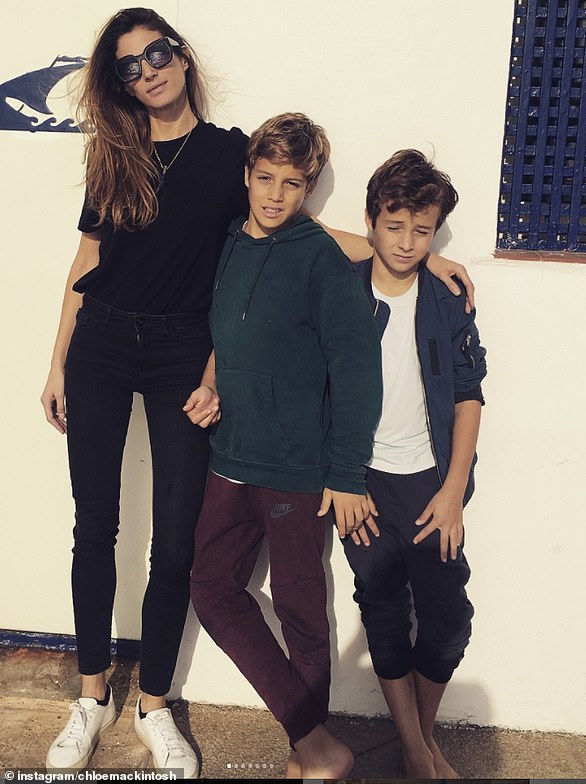 French entrepreneur Chloe Macintosh, who lives in London, has revealed how she created a ‘First Time Sex Starter Kit’ with her sixteen-year-old son to help teens losing their virginity (pictured with her sons Felix, 16, and Elliot, 14)

The ‘starter kit’ element came about organically when her eldest son, Felix, then 16, was chatting about sex with his 19-year-old cousin, Jules.

Once her son’s friends started to hear she was launching the guidance on the app, they began asking her to include different topics, including what position to start with, and what to do when things go wrong.

Chloe told HuffPost: ‘We never learn how to relate, to create intimacy, to listen, to touch.

‘So the content we wanted to put out there is more than some tips to put a condom on, but more relating to the experience and making is as relaxed and comfortable as possible.’

Chloe explained how sex was ‘never’ a topic in her own youth, and she wanted to encourage her sons to have healthy relationships in the future.

She began work on the app during the Covid-19 pandemic, while both of her sons, Felix and Elliot, 14, were at home.

She confessed the topic of sex is unavoidable in their home, where there are ‘sex books everywhere’ as well as ‘toys and gadgets’.

Brent Hoberman: As a 29-year-old entrepreneur, Brent was among the pioneers leading the .com revolution. 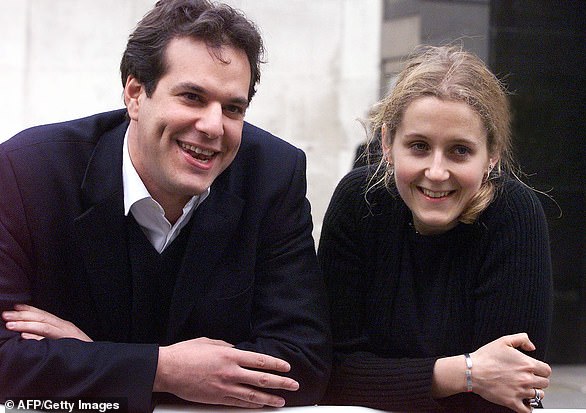 Having built the business from scratch, it was sold to Sabre Holdings in July 2005 for £577 million – despite the company having recorded a £77 million loss in 2004.

Five years later and he was among the four people to found Made.com, which by 2021 when it joined the London Stock Exchange, was worth a whopping £775 million

Ning Li: Born in China, Ning moved to France as a youngster to study there. But he always had ambitions of becoming an entrepreneur. 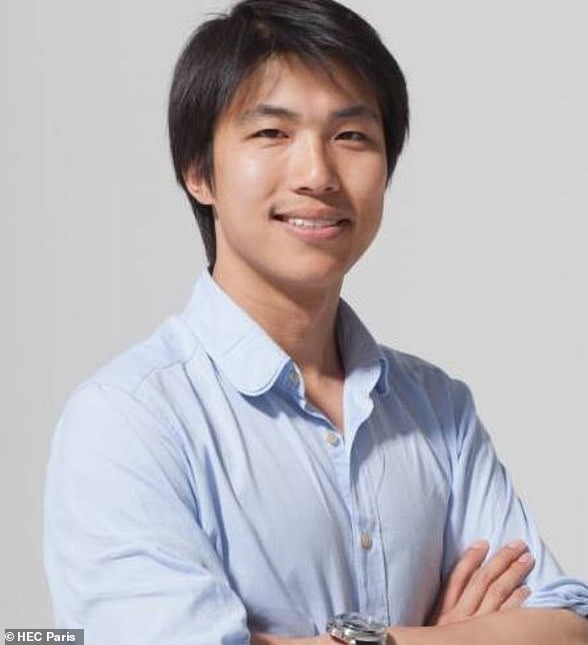 Ning Li was the former chief executive officer of Made.com. He remains as a director of the firm, according to Companies House

The young businessman set up his first business, e-commerce company called Myfab in 2007 before joining the founding team at Made.com in 2010.

Speaking to the Guardian about his inspiration for Made.com, Ning said: ‘A friend in China who was a furniture manufacturer told me he would sell a sofa for £400 to agents, who would then re-sell it to a wholesaler in Europe, but when it eventually came to the store the price tag was outrageous.

‘The same sofa was selling for £3,000. I saw the opportunity of using the internet to disrupt the supply chain.’

He was the furniture firm’s chief executive until 2016, when he stepped down from the role.  He is still listed as a director for Made.com.

The entrepreneur said the online retailer took off rapidly, gaining traction far sooner than he or his fellow co-founders could have anticipated.

‘Made.com gathered momentum very quickly, but because we didn’t anticipate such rapid growth, we made mistakes, mainly, we faced logistical challenges that came with growing the business so quickly,’ he told Bayes Business School in London in 2017.

He added: ‘Yes, it as successful, but at times, it was difficult.’