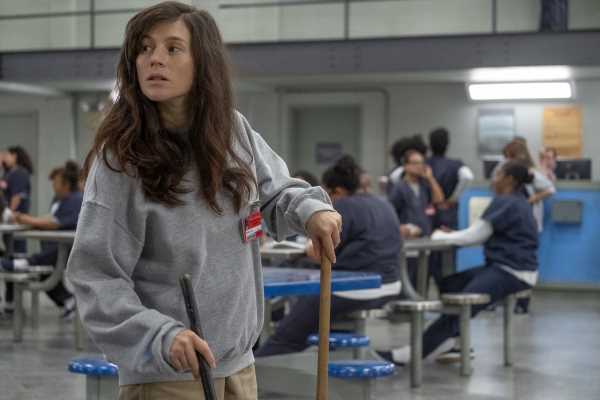 For a while, Lorna was a pretty mysterious character on Orange is the New Black. For the whole first season, the audience knows very little about her past; her most standout traits are that she wears red lipstick, has a strong accent, and is engaged to a man named Christopher. But all that changes in the second season when the audience sees her flashback in Season 2. That’s when fans learn that she is not actually engaged. Instead, she suffers from mental illness and is delusional about her life. After the truth about Lorna’s mental and emotional state is revealed, the audience sees her slowly unravel more and more. By the series finale, Lorna’s ending on Orange is the New Black revealed a lot about her heartbreaking past. Warning: Spoilers for Season 7 of Orange is the New Black follow.

By the time Lorna reaches Season 7, she’s finally made one of her delusions a reality: She is married, and she’s given birth to baby. At the beginning of Season 7, it seems like the character could be headed for a happy ending, even after all the lies she’s told herself. However, that all breaks down when Lorna’s baby dies, and she’s unable to face that reality. She keeps up an Instagram account for her late son using photos of other babies pulled from the Internet. Her husband, Vinnie, asks for a divorce after Lorna’s delusions about their family continue. And it all proves to be too much for Lorna, who loses her grasp on reality.

Yael Stone, who plays Lorna, talked to The Hollywood Reporter about Lorna’s sad ending. She said:

In the same Season 7 episode that shows Lorna breaking with reality, the audience also sees a flashback of Lorna in her time before prison. In that flashback, Lorna stands in the middle of the road and accidentally causes a couple to have a car accident and die. She’s unable to face what she did and spends the rest of the night wandering and pushing the memory out of her brain. Stone said:

At the very end of the series, Lorna is broken down by all her experiences. She’s lost a lot of personality and continues to live with the delusion that she has a family. There is one glimmer of hope for Lorna in the fact that she and Red (Kate Mulgrew) can comfort each other. The last time audiences see Lorna, she has her head in Red’s lap as Red sings to her.

"They’re abandoned. They’re out there in the ether holding onto each other as they beam into space," Stone said.

You can watch all of Season 7 of Orange is the New Black on Netflix now,