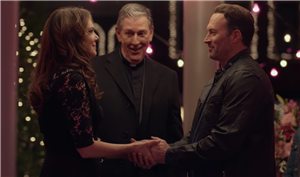 Luke and Lorelai may have finally said "I do" in Netflix’s revival Gilmore Girls: A Year in the Life, but the wedding really wasn’t what many fans expected or hoped for. Even Scott Patterson wants another Luke and Lorelai wedding not only because it would satisfy fans, but because it’s what the beloved TV couple has always deserved. The actor who brought Luke to life for seven seasons in Gilmore Girls strongly advocated for a "big, fat wedding" while chatting with Us Weekly in August about a potential second season of A Year in the Life.

"Well, I’ll tell you one thing, [there] better be a big, fat wedding," he told Us Weekly. "I think that’s what we should give [fans] … I think now it’s time to give them, after 20 years, what they want." In the finale of the Netflix series, Luke and Lorelai eloped the night before their actual wedding. Fans never actually got to see the real ceremony and reception.

Patterson’s words make a lot of sense. He even has some of his own ideas for the wedding and the shenanigans that would of course come with it. "Big, funny, fun," he said. "Filled with drama, filled with laughs, filled with, you know, Miss Patty [forgetting] the dancers and then they [would have] to replace them with little children or dogs. Something very cute and goes right to the heart. A community pulling together to make it all happen."

Now that sounds like a great wedding. Actually, Luke and Lorelai’s big day was supposed to go down differently and be a much bigger event than it was. Amy Sherman-Palladino told TVLine in December 2016, "The wedding was originally a much bigger deal. The wedding was a whole shebang. …Anything that has extras in it and costumes became a production nightmare. So we had to figure out how to make this wedding satisfying without doing ‘The Big Wedding.’" Sherman-Palladino continued, "We knew we had to get them married. In paring all of the bells and whistles away, we get down to the crux of really what it is: It’s Luke, Lorelai and Rory. And that made it intimate and gave it more feeling."

Despite the final wedding decision, Patterson really hopes "The Big Wedding" would finally be shown somehow if Gilmore Girls ever returned. "Doing weddings is an American tradition in film and television. You’ve got all those great wedding scenes in big movies," he told Us Weekly. "And, you know, they’re hard to do, they take a long time … , you know, it’s challenging, it’s a bit expensive, but it’s just worth doing. I mean, that’s where the story wants to go."

As for the possibility of A Year in the Life coming back, Patterson believes there’s always a chance. "If everybody can make the right deal, then it’ll happen," he said. "If everybody’s available, then, you know, it could, it could happen … there’s always hope." If fans were graced with even more Gilmore Girls, then here’s hoping Patterson’s wedding wish comes true. There’s no denying it would’ve been nice to see Luke and Lorleai’s actual wedding ceremony in the square with the entire town in attendance.