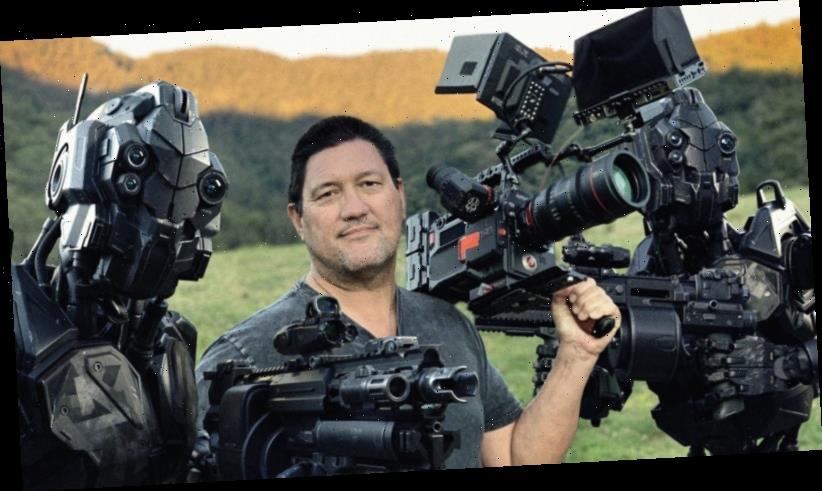 The cardinal rules for making a first feature film are well established. Come up with a simple premise that requires only a few locations and actors – keeping the budget low – and never risk too much of your own money.

Longtime Australian commercials director and cinematographer Mark Toia tore up those rules for sci-fi movie Monsters of Man, which opens a new film festival this week. 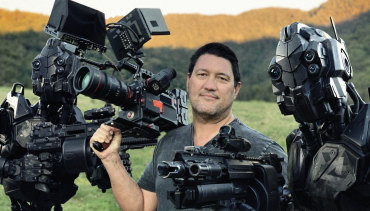 “The ad game has honed me into a bit of a Swiss Army Knife”: director Mark Toia and the robots from his sci-fi pic Monsters of Man.Credit:11:11 Entertainment

He came up with a preposterously ambitious idea for a debut film: a CIA test of military robots goes disastrously wrong when a group of American doctors arrive in a Cambodian jungle for humanitarian work.

Toia, 56, then shot it around the world – starting in Cambodia then moving on to Vancouver, New York and Brisbane. And he and his wife put up $1.6 million of their own "hard cash" to make it, without a cent from government agencies or the film industry.

The idea for Monsters of Man came to Toia during a shoot for a Nescafe commercial in Vietnam. He spent a year seeing whether he could get backing in the US before he and wife Carolyn decided to do it all themselves.

"I thought, you know what, I don't really need the money," he says. "Screw it. I'm going to do this as a bit of an indie film now for the masses and sell it ourselves."

For a director who has made international commercials for the likes of Apple, General Motors and Fiat Chrysler, the pieces fell into place quickly.

"Shooting so many years as a rough-and-tumble advertising director, where we'd just fly around the world doing the craziest things, it just felt so easy by the time it came to making a movie," he says. "The ad game has honed me into a bit of a Swiss Army Knife."

Simon Foster, the director of the Sydney Science Fiction Film Festival, describes Monsters of Man as "RoboCop meets Predator" and was attracted by Toia's maverick approach to filmmaking and how much buzz the trailer has attracted online. 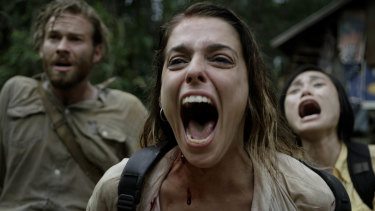 Terror in the jungle: Tatjana Marjanovic (centre) with Paul Haapaniemi and Kayli Tran in Monsters of Man. Credit:11:11 Entertainment

"I recognised it was a hugely commercial title and one that I'd be happy to kick off any film festival with," he says.

Toia took a typically unconventional approach to casting a "name" actor to play a shady CIA operative who directs the military robot test from the US – leaving it until almost the end of the shoot.

"Everyone in the ad game knows me but in the movie world I'm just a nobody," he says. "So I thought, we'll get the movie together and I'll show it to three or four actors that I really want in the film and I knew I could possibly afford."

Neal McDonough (Captain America: The First Avenger and Suits) was "the most helpful and eager" so he was cast.

So how could they afford to spend $1.6 million plus marketing costs?

Directing a covert military operation from the US: Neal McDonough in Monsters of Man. Credit:11:11 Entertainment

"My wife and I do a bit a property investment," Toia says. "And my advertising directing around the planet has been very successful over the last 20 years."

Does he expect to make their money back?

"I have no idea," Toia says. "I decided that if I was going to do a movie, I'd just do my own just for more of a therapy, relaxation type thing. And it was therapeutic. Because we funded it ourselves, I didn't have to listen to anyone.

"Because I was a painter as a child, it was like a painting for me. It was like working in my garage, painting away."

The Sydney Science Fiction Film Festival runs at Actors Centre Australia in Leichhardt from November 19 to 21. Monsters of Man is released online on December 8.