Although it has been over two decades since her death, Princess Diana is still remembered by many people around the world. Perhaps it is not surprising, then, that many things her daughters-in-law do would remind the public of her.

For example, Meghan Markle and Prince Harry recently released a Christmas card, and some people quickly pointed out one similarity between the Duchess of Sussex and her late mother-in-law.

On Dec. 23, Meghan and Harry released a Christmas card with a photo of their family. In the photo, Harry is sitting with their 2-year-old son, Archie, in his lap. Beside them is Meghan, who is holding their infant daughter, Lilibet.

The photo was taken by photographer Alexi Lubomirski, who also took photos of the couple during their engagement and wedding.

Additionally, royal journalist Omid Scobie shared on Twitter that the photo was taken “at home in the summer.”

The Sussexes also added a message alongside their card. Meghan and Harry wrote, “This year, 2021, we welcomed our daughter, Lilibet, to the world. Archie made us a ‘Mama’ and a ‘Papa,’ and Lili made us a family. As we look forward to 2022, we have made donations on your behalf to several organizations that honor and protect families — from those being relocated from Afghanistan, to American families in need of paid parental leave.”

Meghan and Harry ended the card with holiday cheer: “Wishing you a happy holiday season and a prosperous New Year, from our family to yours! As ever, Harry, Meghan, Archie, and Lili.”

In the Christmas photo, Meghan could be seen smiling at Lilibet as the duchess lifted her daughter into the air.

Body language expert Jesús Enrique Rosas (who also goes by The Body Language Guy on social media), noted in a recent YouTube video that this pose is “disturbingly similar” to one that Diana made in a photograph with baby Prince William.

“That cannot be unseen,” Rosas commented.

The expert also shared some other body language analyses, such as Harry and Meghan each having a “genuine smile” in the photo and Archie and Lilibet are dressed in white to draw more attention to them.

Meghan Markle has been compared to Princess Diana in many ways 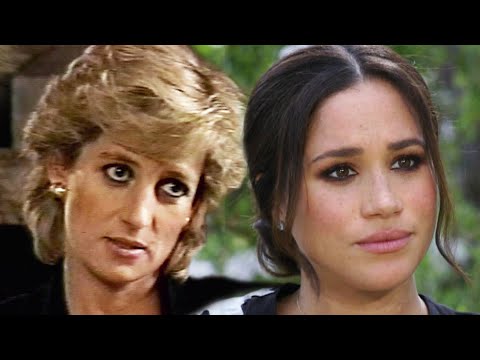 This is not the first time Meghan has been compared to Diana, and it is likely not going to be the last. Ever since she joined the royal family, many onlookers have pointed out similarities between Meghan and the late princess.

For example, Meghan has done a lot of humanitarian work, even before becoming a royal. Diana was famous for her humanitarian work as well, and this has been a point of similarities between the two women.

Additionally, Harry himself has also compared the negative press Meghan receives to the way the press chased after Diana in the 1980s and 1990s. This led to the couple’s decision to step away from their royal roles in 2020 and moved to California for more privacy.