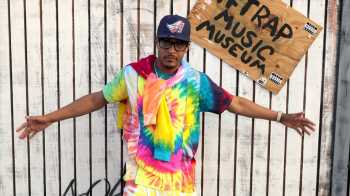 Trap Music Museum founder T.I. and media maven Karen Civil hosted the launch event, which took place in the Delicious Pizza space on Sunset Blvd. in West Hollywood. Attendees were able to visit the newly-created space, which began in Grandma’s Living Room where a real trap house was brought to life — with prop guns, drugs, and money on the coffee table portraying the proverbial hustle.

Gucci Mane’s Lil Trap Kitchen brought his lyrics to life, capturing what a trap house looked like back in the day. From scales to Pyrex measuring cups on top of the stove to Atlanta’s prominent fast food chain J. R. Crickets left cold on the counter, this showed how far the rapper had come in his career.

Pusha T’s interactive exhibit showcased the cover art to his debut album “My Name Is My Name,” which was displayed directly across from Migos’ “The Nawf,” to replicate of their neighborhood growing up. Other notable pieces includes a rendition of Future’s “Dirty Sprite 2” cover, Young Jeezy’s “Brick Wall,” and of course the godfather of trap, T.I’s Rubbermand Man installation constructed entirely of rubber bands.

While this serves as an ode to the trap culture that rose out of Atlanta, the Lil Trap House also paid respect to two of the hottest females in rap in this moment: Nicki Minaj and Cardi B. While it seem like they’re constantly beefing, it was nice to see them sharing a throne in peace.

Finally, guests took in a West Coast tribute that featured YG and the late Nipsey Hussle reuniting gang culture in the city of Angels, as was the rapper’s life mission before he was senselessly gunned down outside his Marathon clothing store.

Among the notables in attendance were Kareem “Biggs”Burke, T.I.’s son Domani Harris, Shiggy Show and Jasmine Brown. All guests were gifted with free pizza and merch. The exhibit will remain open to the public through July.