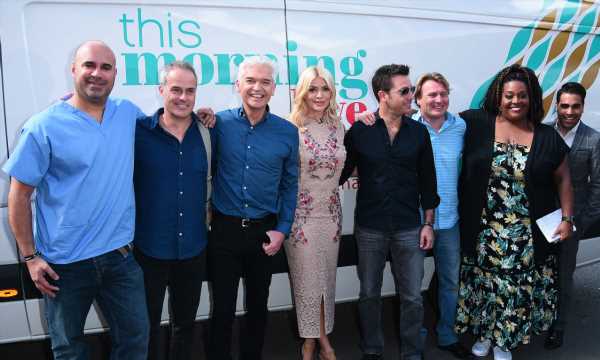 The year is going by in a flash, and in just a few months' time we will be hearing the famous Strictly Come Dancing theme tune in our living rooms as the new series gets under way. And while there have been many celebrities rumoured as possible contestants for this year's competition, one person who definitely won't be doing it is This Morning's very own resident chef, Gino D'Acampo. Despite the fact that This Morning stars Ruth Langsford and Dr Ranj have taken to the dance floor in the past, Gino has admitted that he was asked to compete, but that he said no because he is simply too busy. Talking to the Daily Star Sunday, the 42-year-old said: "Strictly have asked me. But that show would require a lot of time and training. Who has got time for that? Not me, not at the moment."

The latest series of Strictly Come Dancing was the biggest yet, and was even watched by royalty when the Countess of Wessex took her daughter Lady Louise Windsor to the studio for a birthday treat. The show also saw many romances blossom from it, with dance partners Joe Sugg and Dianne Buswell now an item, along with Kevin Clifton and Stacey Dooley and Giovanni Pernice and Ashley Roberts. The show has also seen many relationships form from previous years, notably Pasha Kovalev and Rachel Riley – who got married earlier in the month ahead of the arrival of their first baby. Gemma Atkinson and Gorka Marquez also met on the BBC One dance show, and recently welcomed a baby daughter.

MORE: Prince George and Princess Charlotte enjoy day out with their grandparents – details

Strictly fans are anticipating to find out not only the new contestants, but the new judge too. Earlier in the year, Darcey Bussell announced that she was stepping down from her role on the judging panel after seven years, and potential replacements include former EastEnders star Bonnie Langford – who is a trained dancer – and Strictly veteran Anton du Beke. The show will also have a slightly different format. Judge Craig Revel Horwood revealed on This Morning in May: "This year is going to be very interesting. Like Australia, they're taking a leaf out of Australia's book, and of course Dancing with the Stars in America, the judges will be dancing. I don't know that Shirley Ballas knows that yet, but she will. We'll dance with the contestants. You put yourself on the line, so to speak."