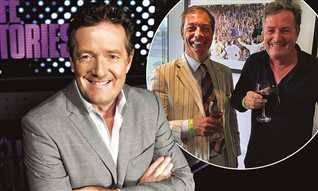 ‘Me? US Ambassador? I have bigger plans…’ Nigel Farage told me at Lord’s

Each summer I challenge my Sussex village Newick to a charity game of 20/20 cricket and pack my ‘family’ team with world-class ringers. This year the Morgan XI featured West Indian superstar Chris ‘Universe Boss’ Gayle and England legends Kevin Pietersen and Michael Vaughan.

I also had a schoolboy batting sensation from Eastbourne College, and most of my genuine family have played high-level club cricket. So to say I was confident is putting it mildly, and my stars shared my optimism. 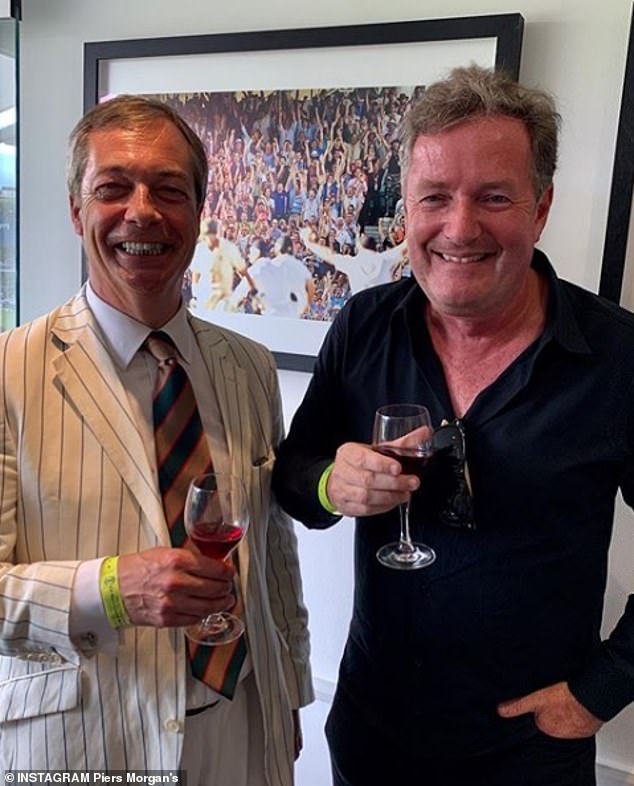 I received a text message from Nigel Farage: ‘In the Mound Upper if you fancy a sherbet.’ I found the Brexit Party leader in striped cricket blazer, with two glasses of ‘sherbet’

‘We’ll batter them, Skip,’ said Vaughan, who scored 140 the last time he played for me.

‘I smell runs,’ smirked Gayle, though his next words, worryingly, were ‘I also smell rum!’

‘My goodness,’ exclaimed my commentator, Test Match Special icon Henry ‘Blowers’ Blofeld, when he arrived. ‘The Morgan XI is a mighty unit! The village doesn’t stand a chance!’

‘They won’t see it like that,’ I cautioned. ‘They usually win.’

But losing this time did seem unthinkable, and a huge crowd of 3,000 locals turned up to witness the inevitable slaughter. I’d persuaded the current Miss World, the fabulously beautiful Vanessa Ponce from Mexico, to toss the coin.

‘No sledging, and no picking the seam!’ she warned as we gathered on the wicket. ‘I don’t actually know what that means,’ she whisper-giggled to me, ‘but it sounds quite naughty.’

Newick won the toss and put us into bat, and within 30 minutes my leisurely jaunt to victory lay in ignominious ruins.

Gayle was caught on the boundary for six, Vaughan bowled for 11, Pietersen skittled for two – playing a closed-eye howler of a shot so bad it sparked a Twitter meme contest – and my schoolboy wunderkind went for three.

‘The wicket was terrible!’ whined KP.

‘How do you know? I retorted. ‘Your bloody eyes were shut.’

It was left to me to rescue the situation with a flurry of boundaries. Three to be precise, but I still top-scored with 18 in our dismal total of only 110 – just one run short of my three shamefaced legends’ combined tally.

Newick had secretly recruited Sussex star Luke Wright, who lives in the village, and he whacked 47 as they won in only 14 overs.

‘The wicket seemed fine to me,’ he chortled afterwards. ‘Your legends are too rich, I still have to graft to pay the bills!’

England have reached the cricket World Cup Final and I got to Lord’s early to see the team warm up on the pitch. For 20 minutes I watched opening batsman Jason Roy have endless balls hit hard towards him, which he picked up and hurled back with astonishing speed and accuracy to a coach standing over some stumps.

But I wasn’t interested in his fielding skills. ‘We need you smacking runs, not risking injury by doing this!’ I beseeched when he caught my eye, grinned and gave me a thumbs-up.

The game itself was a tough battle for many hours. During one impasse I received a text message from fellow cricket nut Nigel Farage: ‘In the Mound Upper if you fancy a sherbet.’

I found the Brexit Party leader in striped cricket blazer, with two glasses of ‘sherbet’.

‘What was your cricket-playing highlight?’ I asked.

‘I once got 74 opening the batting for Dulwich 2s against Epsom College,’ he replied proudly. (Mine would be scoring my only century, for Newick, taking all ten wickets in a prep school 1st XI game and getting Brian Lara out for nought.)

There are rumours that Farage is being lined up to replace Sir Kim Darroch as UK Ambassador to the US, though I myself am 8-1 with the bookies.

‘I have bigger plans,’ he insisted. ‘You should do it, Piers.’

‘You seriously think I should be a diplomat?’ I asked.

Farage exploded with laughter. ‘You’re right, that does sound ridiculous.’

By early evening the match had exploded into life and culminated in the most dramatic and thrilling finale I’ve ever seen.

After the game was tied, New Zealand needed two runs off the last ball of the extra ‘super-over’ to win.

Their batsman Guptill smashed it to the boundary, where Roy was positioned. As they turned for a second run, Roy swooped on the ball and rocketed it arrow-like to wicket-keeper Jos Buttler, who whipped the bails off just in time.

‘Jesus!’ texted Ronan Keating, ‘I don’t even like cricket but that was bloody entertaining!’

Later I discovered that Roy has spent the past four years being specifically trained as a ‘boundary rider’ to do exactly what he did in that crucial moment, and exactly what he’d done for those 20 minutes before the match.

‘My legs went weak after I threw it in,’ he told me. ‘I’ve never felt that pressure before, and don’t think I ever will again!’

Practice, it turns out, really does make perfect.

We went better and made him an official Lord – of the Principality of Sealand, a former military fortress off the coast of Suffolk that’s now the smallest country in the world.

Its motto is E Mare, Libertas (From the Sea, Freedom), reflecting its long struggle for liberty. A perfect metaphor for a man who many blamed for costing England the T20 World Cup in 2016 by conceding four consecutive sixes in the final over, and who could have been in prison on Sunday if his court case last year over a nightclub brawl hadn’t resulted in his acquittal.