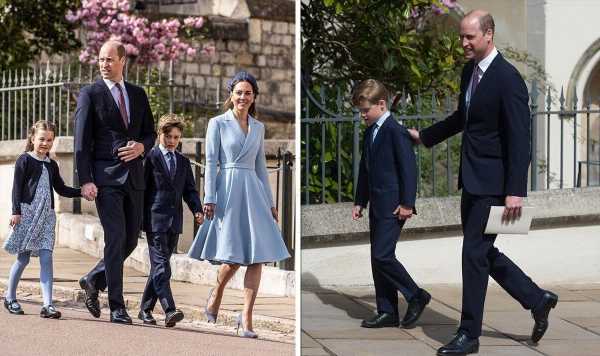 Prince George and Princess Charlotte, six, are rarely seen out in public with the Duke and Duchess of Cambridge, but when they are, their body language signs unveil much about them. The children’s latest appearance was last Sunday, April 17, when they attended the Easter service at St. George’s Chapel in Windsor.

Mostly, they were different to normal – instead of holding one of his parents’ hands, like he usually does, the eight-year-old walked alone, with confidence.

Judi said: “This Easter it appears that George’s body language rituals signal a quiet but important coming of age as we see him walking alone between his parents, arms swinging, rather than holding his father’s hand as is usual.

“This change of dynamic, as William holds daughter Charlotte’s hand instead, suggests George is now seen as pretty grown up and able to appear as an individual royal rather than a royal child.

“William even seems to emphasise the decision to allow George to go it alone a little by holding his right arm crooked so that there is no hand dangling for George to hold onto.”

However, Judi noted that this “new freedom” still allowed “for some touches and gestures of reassurance from both William and Kate”.

She continued: “Kate touches her son on the back to gently push him forward as they make their introductions and there is a loving stroke on the back of the head from William.”

She said: “Coming up behind the Cambridges we can see what might be another reason to prompt this grown-up behaviour from George.

“Walking between her parents, Mia Tindall strides out confidently with her own arms swinging at her sides.

“She is even walking out ahead of Zara and Mike at one point and looking reluctant about finally taking their hands before they enter the church.

“George might show some signs of diffidence here, but with competition like Mia he’s probably keen to drop the hand-holding to look more like a mini version of his dad.”

George was a “mini version of his dad” in more ways than one last week.

The eight-year-old wore a dark blue suit very similar to his father’s.

He also donned a white shirt and a navy-blue dotted tie.

His sister, Charlotte, matched her mother in a pale blue and white floral dress.

The dress featured a wide collar and a pleated, almost peplum-like skirt that reached her knees.

It was cinched in at the waist with a subtle belt and was made from a thick material.

The Duchess matched the dress with a pale blue clutch bag and a darker blue headband.

She finished the look with a pair of baby blue stiletto heels.