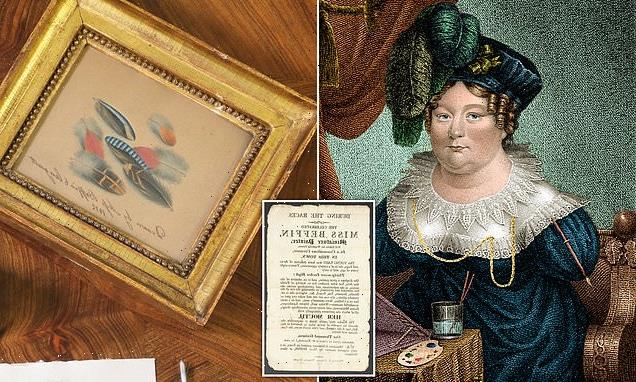 Return of the ‘limbless wonder’: Victorian artist Sarah Biffin who was born without arms or legs and painted with her mouth as a travelling show act finds new fans as her work goes up for auction

A rare painting by a Victorian artist who was born without arms or legs is to be auctioned this week.

Sarah Biffin was born in Somerset in 1784 with congenital deformity phocomelia, teaching herself to write, paint and hold scissors using only her mouth at the age of 10.

As a young teenager she travelling the country as part of Emmanuel Dukes’ travelling show but later in life undertook professional training and received recognition by The Society of Arts and the Royal Academy.

She was so esteemed that she was even mentioned by Charles Dickens in Nicholas Nickleby, Martin Chuzzlewit, and Little Dorrit.

In recent years, her artwork has become more prominent, with a self-portrait estimated to be worth as little as £800 fetching £130,000 at Sotheby’s in December 2019.

Her painting of the colourful bird feathers is expected to fetch £5,000 when it goes up for auction tomorrow, though a similar piece sold earlier this year for £52,000. 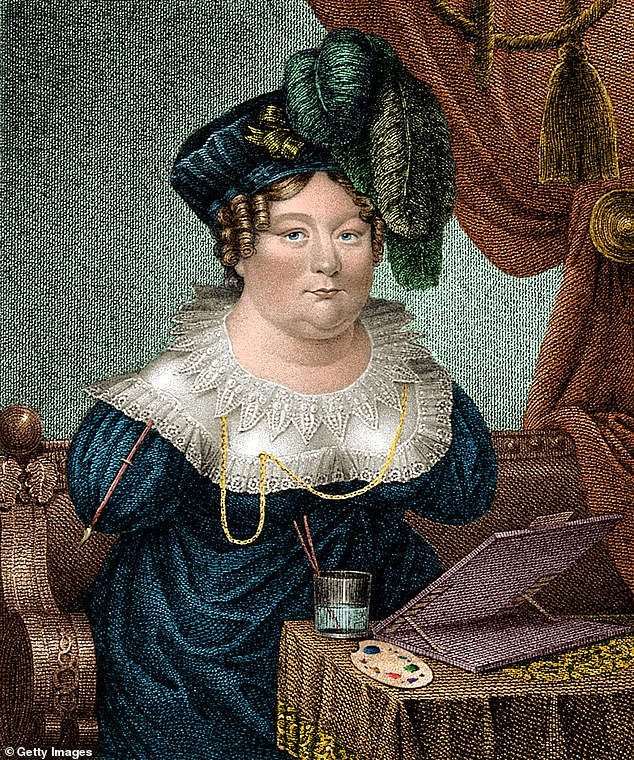 A rare painting by Victorian artist Sarah Biffin, who was born without arms or legs, is to be auctioned this week

Sarah was born to parents, Henry and Sarah, who lived in a labourer’s cottage in East Quantoxhead, near Bridgwater in Somerset, the middle child of five.

Her baptism certificate records that she was ‘born without arms and legs’.

As a child, she taught herself how to use her mouth to write, paint and use scissors, before she began to showcase this skills in public as a career.

She began travelling the country with Dukes, when she was billed as  ‘the eighth wonder’ or ‘the limbless wonder.’ 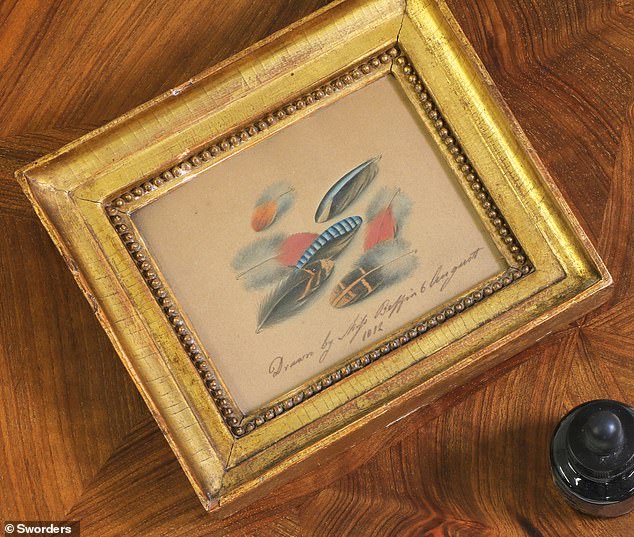 Her painting of the colourful bird feathers is expected to fetch £5,000 when it goes up for auction tomorrow, though a similar piece sold earlier this year for £52,000

The disorder which meant artist Sarah Biffin was born without limbs

Bilateral phocomelia is a congenital disorder, or birth defect, that causes the shortening or absence of limbs.

Children can be born without legs or arms.

The most common cause for this disorder is genetic inheritance.

It is a recessive gene, so both parents have to be carriers for it to occur in the child.

If both are carriers, the child has a 25 percent chance of getting the disorder.

Treatment is hard because there is a lack of nerves and bone tissue in the area that is absent.

Surgeons can sometimes reconstruct the area or fit prosthetic limbs to the patient.

She lived with Mr and Mrs Dukes as part of their family, and would demonstrate her sewing skills, cut out and made clothes, gave out writing samples, and painted portraits during her performances.

In 1804, a then-20-year-old Biffin began taking commissions, thus beginning her career as a professional artist.

Four years later, Dukes began acting as her fine art instructor until she was introduced to William, 16th Earl of Morton, at one of the fairs.

The Earl commissioned her to paint a miniature portrait of himself and became so impressed by her talents that he sponsored her to study at the Royal Academy of Arts.

The relationship led to further commissions including George III to buy one portrait for his daughter, Queen Victoria, which is now in the Royal Collection.

The Society of Arts awarded her a medal in 1821 and the Royal Academy accepted her work.

Success both professionally and personally followed, and she opened a studio in the Strand in London and married William Stephen Wright on 6th September 1824.

According to ArtUK.org, she wore the gold wedding ring on a chain around her neck.

Edward Boys Ellman described her technique in Recollections of a Sussex Parson, writing she was ‘a heavy looking woman; she wore a turban and was always seated on a sofa.

‘Her paint brush was pinned to a large puff sleeve which covered the short stump of the upper part of the arm.

‘She fixed and removed the paint brush with her teeth, when necessary to wash the brush. 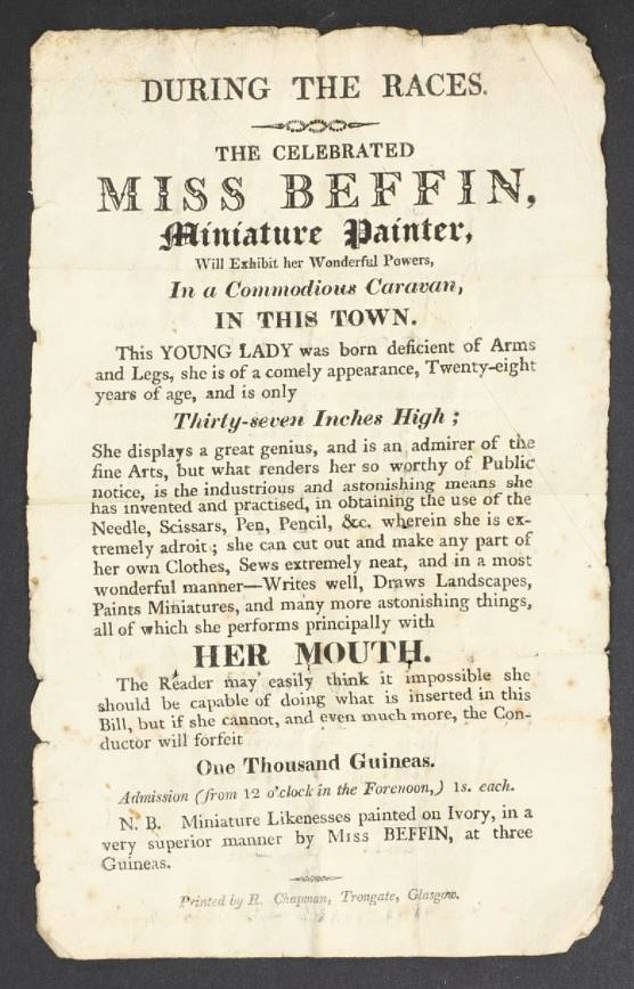 ‘When painting she leant her right shoulder forward, almost touching the table.

‘She declared that she considered that for painting she had the advantage of those who had arms, for surely it was easier to paint with a short brush than with a long stick!’

The Earl of Morton died in 1827 leaving Sarah without a noble sponsor, which caused her financial difficulties.

She died in the city on 2nd October 1850 at the age of 66 and is now buried in St James’s cemetery in Liverpool. 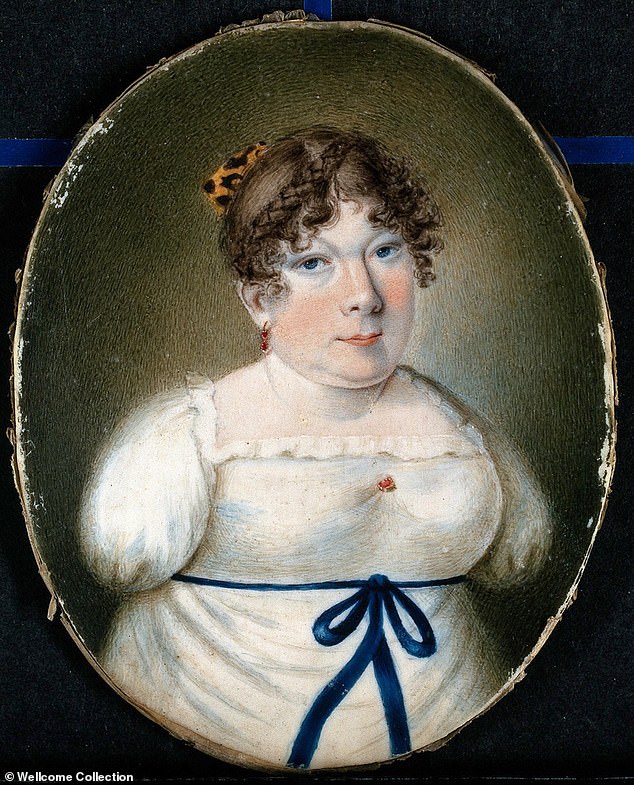 Having been born without arms or legs, Sarah taught herself how to use her mouth to write, paint and use scissors, before she began to showcase this skills in public as a career 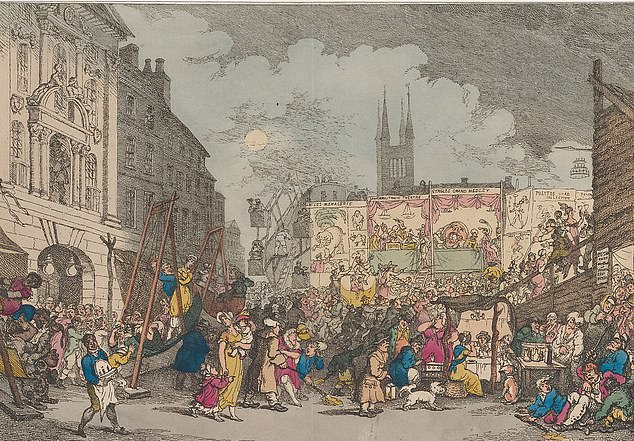 Sarah began travelling the country with Dukes fair, when she was billed as ‘the eighth wonder’ or ‘the limbless wonder’ (pictured, a fair at which Sarah appeared) 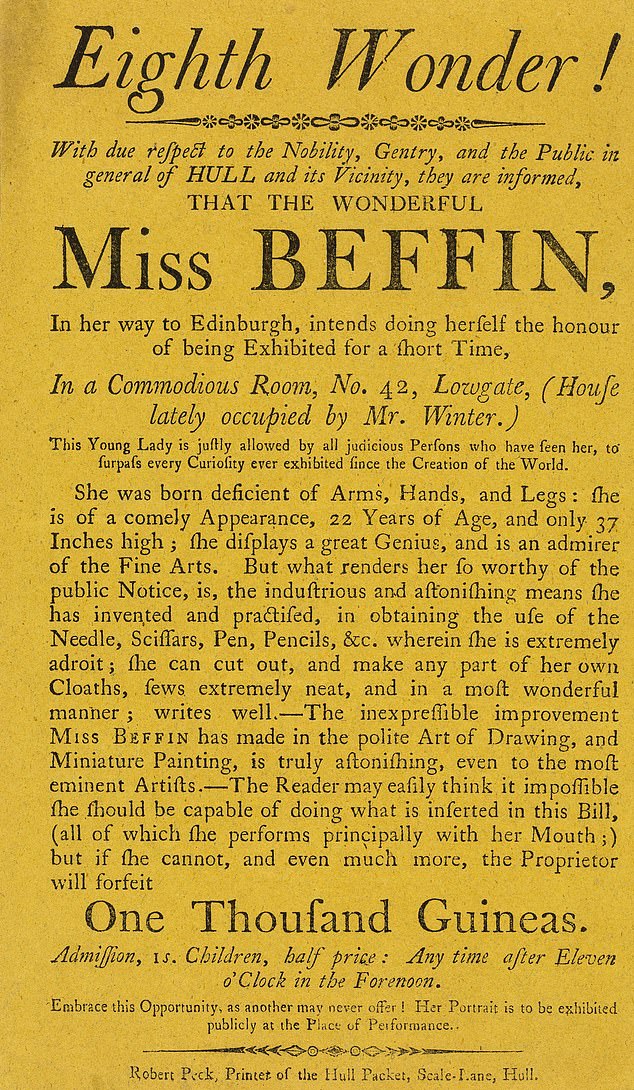 On leaflets advertising Biffin’s talents, she was often described as the ‘eighth wonder’ of the world (pictured)

Her work only began to gather esteem in recent years, with a miniature self portrait fetching over £130,000 at auction in December 2019.

It shocked auctioneers when it made £137,500, with Emma Rutherford Portrait Miniatures Specialist telling PhilipMould.com: ‘I think the portrait represents much of what we admire today – a person with disabilities far more talented than many of her contemporaries, who, on the whole, would have been men.

‘She represents such strength in overcoming not only the prejudice that would undoubtedly have been shown towards a professional female artist but also towards someone who would have been viewed as a circus freak. 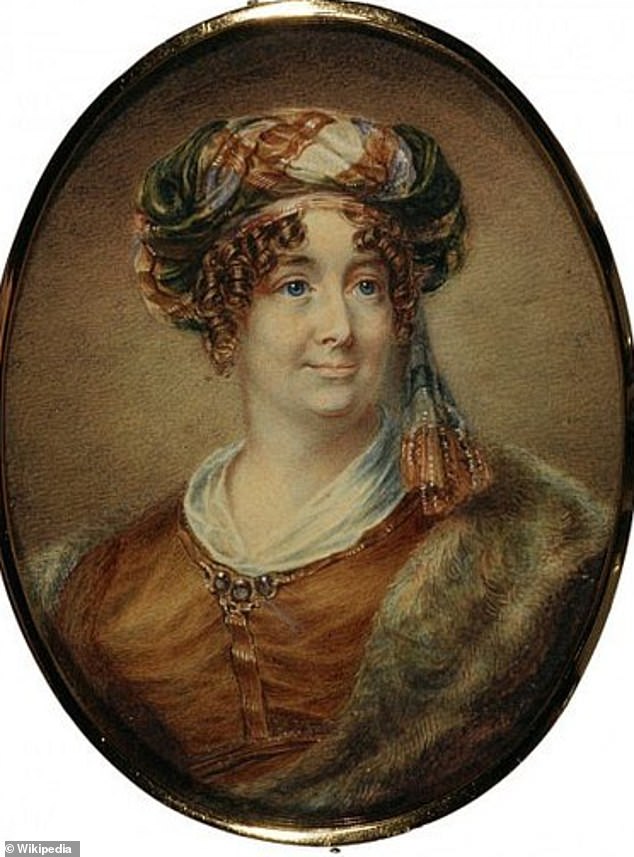 Sarah gained renown among her peers after she was introduced to William, 16th Earl of Morton, at one of the fairs

‘The odds were stacked against her at birth, but here we are presented with the image she made of herself, the image she wanted to present to the world.’

The new piece set to go to auction this week is a 10cm x 12cm watercolour of feathers, inscribed in pen ‘Drawn by Miss Biffin, 6th August 1812’.

It is to be sold alongside a poster which advertised her as an attraction ‘During The Races’.

On the poster, she is described as ‘born deficient of arms and legs, she is of comely appearance, twenty-eight years of age, and is only thirty-seven inches high.

‘She displays a great genius, and is an admirer of the Fine Arts, but what renders her so worthy of public notice is the industrious and astonishing means she has invented and practised, in obtaining the use of the needle, scissors, pen and pencil and wherein she is extremely adroit.’ 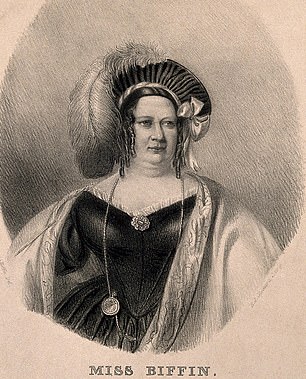 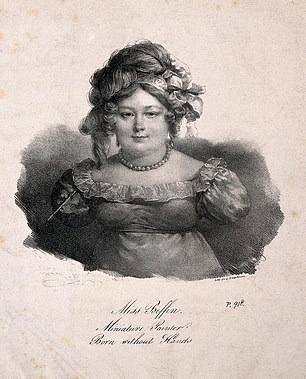 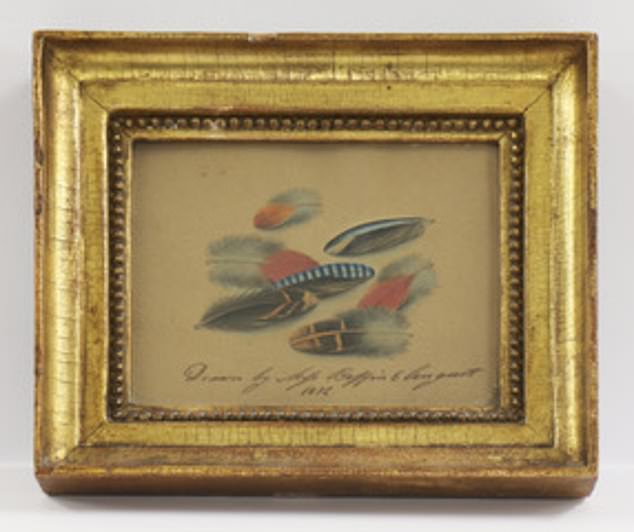 Sworders’ picture comes for sale from the collection of the late Peter Crofts, a Wisbech, Cambridgeshire antiques dealer for whom it doubtless had particular resonance

Sworders’ picture comes for sale from the collection of the late Peter Crofts, a Wisbech, Cambridgeshire antiques dealer for whom it doubtless had particular resonance.

When, aged 20, Crofts was training as a pilot in Florida in 1945, the engine of his Corsair F4U had burst into flames leaving him seriously injured.

Both his legs were amputated and he had spent three and a half years in hospital.

Under the guidance of the Stamford dealer Major Bernard Edinburgh, he became an antiques dealer and by 1958 was elected a member of the British Antique Dealers Association.

Despite his disability, he was a keen sailor, owning an 88-year-old clinker-built Norfolk beach boat.