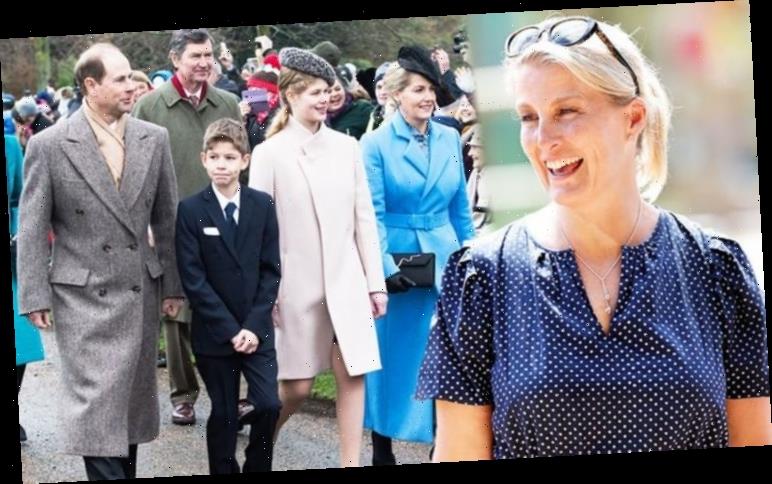 Sophie, Countess of Wessex and Prince Edward have been married since June 1999. The royals have two children together who are the grandchildren of Queen Elizabeth II.

The Earl and Countess of Wessex are both senior working members of the Royal Family.

However, it is not likely their children will follow the same career path as they were not given HRH titles when they were born.

Because of this, the royal teenagers have mostly stayed out of the public eye and Sophie has spoken about their normal upbringing.

In a rare interview with The Sunday Times in June, Sophie stated: “They go to a regular school. They go to friends for sleepovers and parties.

“At weekends, we do lots of dog-walking and stay with friends.

“I guess not everyone’s grandparents live in a castle, but where you are going is not the important part, or who they are. When they are with the Queen, she is their grandmother.”

While Sophie and Edward carry out various royal engagements, Louise and James rarely join them.

When the family do step out together, body language expert Judi James commented on Sophie’s parenting style.

She suggested the royal has taken tips from Prince Edward’s mother, the Queen.

Judi said: “Like her mother-in-law, Sophie’s approach in public appears to be very hands-off.

“She places a social-sized spatial gap between herself and her children and this seems to gently encourage confidence and a feeling of being ‘adult’ in public.

“Both children show some signs of shyness but Sophie’s unfussy technique seems to allow them to push themselves at their own pace.”

The family were recently out together during a beach clean in Southsea and also made a trip to Bristol Zoo last year.

During these outings, the expert suggested Sophie has taken a step back with her children.

Doing this could help boost the confidence of her children, Judi claimed.

But although Sophie has an “unfussy” approach to parenting, her body language shows she is still a “doting mum”.

Judi continued: “Sophie’s encouraging and proud smile is teamed with the kind of spatial gap you’d get between friends, allowing Sophie’s daughter to be seen and to feel like a confident adult in public.

“She steps back to use the eye-gaze, meaning she’s sharing without being over-protective.

“One of her hands is raised to suggest active eye and ear listening from this clearly doting mum.”