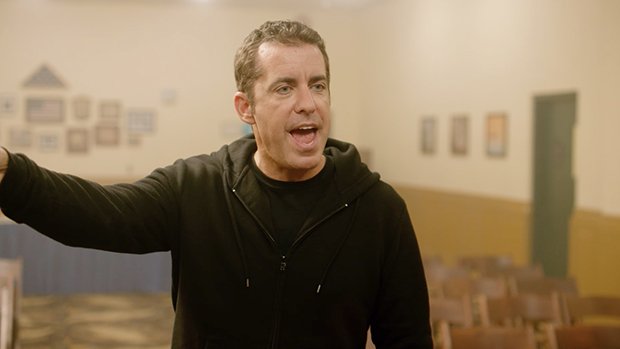 Only Nate would show up to his own ‘funeral’ with criticisms. HL has an EXCLUSIVE preview of the July 30 episode of ‘The Detour’ and Nate has quite the plan to reunite the family.

Our EXCLUSIVE sneak peek of the all-new episode of The Detour opens with a shrine to the late Nate the Great. “This is all my fault,” Jared says to Robin. “Delilah said she’d only come see us at a funeral. I thought of all these ways to kill you guys. I never wanted any of this to happen.”

Robin steps up to give Nate’s eulogy. She starts out fine but then eventually gets fed up. “This is so stupid,” she says. That’s when Nate shows up — to his own funeral. “Let me tell you what’s stupid,” Nate says. “Hearing an ‘ugh’ in the middle of your own eulogy.” He has something to say about everything regarding the fake funeral.

From the balloons spelling “#1 Dud” instead of “#1 Dad” to carnations to a tennis racket to his autographed skates, this is the worst funeral ever, according to Nate. He also calls the venue “atrocious.” Robin claps back, “Hey, war heroes have funerals here. So I guess it’s good enough for the greatest generation but not for Nate the Great.”

Nate’s still not done with his criticisms. “Can I tell you? If I was actually dead, I’d be rolling over in my grave right now,” he tells Robin, who has the last laugh. “You were cremated, dum dum. Get your story straight,” she quips.

Season 4 finds the wildly dysfunctional Parker family on an epic worldwide search for their runaway teen daughter, Delilah. From Tibet to Paraguay and everywhere in between, The Parkers will stop at nothing to get their baby girl back – and piss off everyone in the process. The Detour airs Tuesdays at 10:30 p.m. on TBS.