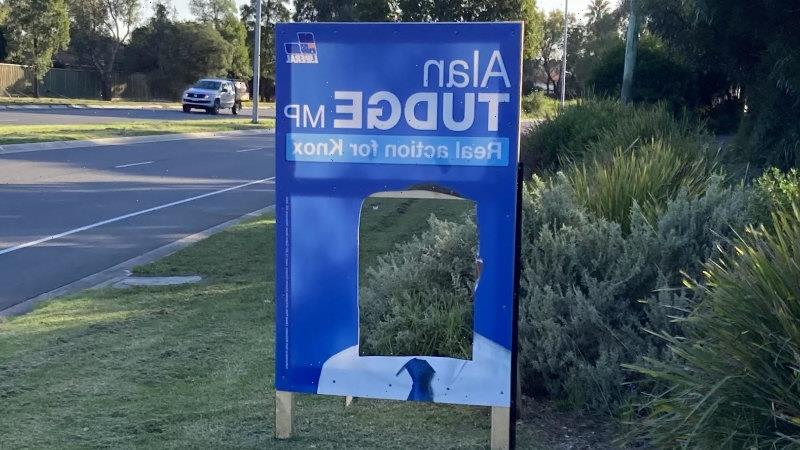 The man doing Alan Tudge’s job doesn’t know where he is. Stuart Robert, the acting education minister, told morning TV he wasn’t keeping track of where his fellow cabinet minister is these days.

He’s not alone. Very few people seem to know where Tudge is, although Prime Minister Scott Morrison says he’ll return as education minister if the Coalition wins the election.

Twenty-five days into the campaign and Tudge, who holds the unusual position of a stood-aside minister awaiting a return to cabinet, has held no press conferences, issued no policies and conducted no interviews. He has not appeared alongside the prime minister or with any other ministers as they campaign around the country. 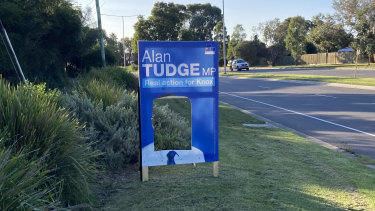 Alan Tudge has not been easy to find in the campaign.

The Victorian MP, who is campaigning for re-election in his safe seat of Aston, has instead run a hyper-local campaign that has been carefully documented on Facebook, far from media scrutiny. He has declined to debate Labor’s Tanya Plibersek on education – the portfolio Scott Morrison expects him to hold if the Coalition wins the election.

Tudge has visited aged care centres, sports teams, and a school, announced $1.5 million for a Hindu community hub and taken a selfie with the Easter Bunny.

The Age and Sydney Morning Herald made numerous attempts to discuss the campaign with Tudge via his ministerial office, knocked on his electorate office door and spoke to his chief of staff and electorate officer over the course of weeks.

His staff said he would not be doing interviews and supplied a written statement. He also did not respond to direct attempts to contact him.

“In the first week of the campaign, before he caught COVID, Mr Tudge attended at least a dozen campaign activities and has interacted with hundreds of locals,” a spokesman said.

“He is running a similar campaign to that in 2019, which includes coordinating over 400 volunteers, telephone canvassing, door knocking, social media, street stalls, community events and fundraising. Mr Tudge is well known in his electorate, has always been accessible and he and his office deal with dozens of constituents every single day.”

His first public event, post COVID, was on Anzac Day and he has been actively campaigning since then following The Age and Herald’s repeated questioning of his whereabouts.

Prior to that, Tudge had only documented three campaign events, two of which were small private gatherings, since the election was called on April 11. Tudge stood aside from cabinet in December after his former lover and staffer Rachelle Miller accused him of being emotionally abusive and at one point physically abusive. He has denied the claims and two inquiries have not made findings against him. 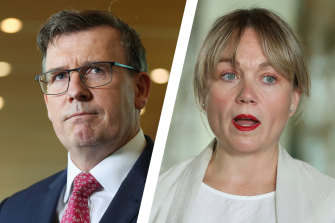 A first inquiry by law firm Sparke Hellmore and Tudge has claimed it had made “no adverse findings” against him. The second inquiry found there was insufficient evidence to support a finding.

On the ground in Aston, some of Tudge’s campaign corflutes have been vandalised, he has avoided local media and his Labor opponent Mary Doyle points out she is campaigning every day and speaking to locals who have an “increasingly negative [view of] the Liberals and particularly Alan Tudge”.

On the damaged corflutes, Tudge blamed his opponents in a post on Facebook and warned “three have already been caught by police and will soon have criminal records”.

Tudge holds the outer suburban mortgage belt seat of Aston, in Melbourne’s outer east, with a 10.1 per cent margin and will be hard to dislodge.

The Coalition’s campaign headquarters did not respond to questions about Tudge’s whereabouts, campaign plans, policy agenda and a request for an interview.

A week ago, The Sydney Morning Herald and The Age reported Labor frontbenchers including Tanya Plibersek, Bill Shorten and Ed Husic were campaigning across the country but had been frozen out from Labor’s national campaign and the media pack travelling with Anthony Albanese.

Tudge is not the only senior member of the Coalition side to have been largely absent from the Coalition’s national campaign, with ministers including Linda Reynolds, Richard Colbeck and Ken Wyatt making few, if any, policy announcements or giving national media interviews.

Asked on Thursday where Tudge was, acting education minister Stuart Robert said: “I suggest in his electorate. I don’t know where he is. I tend not to keep track of my colleagues’ whereabouts”.

Robert told the ABC he was “not across those issues” when asked about the settlement and that “those issues are dealt with by the Department of Finance, very much at arm’s length from anyone, certainly arm’s length for me”.

A day earlier, Morrison said that Tudge would be his education minister if the government is re-elected and “if he’s prepared, if he’s available to come back into the ministry, then he will”.

“He decided to stand aside for his own personal reasons. And should he be in a position to be able to step up again, then I would welcome him back,” Morrison said.

The Prime Minister indicated he would not be heading to Aston to campaign alongside Tudge because “he doesn’t need my help there, he’s done a fantastic job in Aston”. 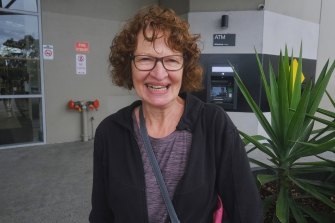 At the Westfield Knox Shopping Centre in the heart of Tudge’s seat, people have already turned their attention to who they will vote for on May 21. While one person cited Tudge’s extramarital affair as a reason not to support him, others said local issues would determine their vote.

Rowville woman Christine, 69, describes herself as “old-fashioned” and said Tudge had delivered for his local community.

“He’s done Henderson Road, which has been a blessing.

“Alan Tudge keeps telling us what he’s done, and at the end of the day he fights for his electorate, and that’s what I like about a politician.” 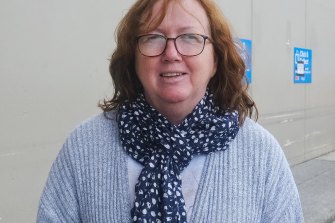 Chris says she won’t be voting for Tudge on May 21.Credit:Luis Enrique Ascui

Sixty-one-year-old Chris, a teacher from Ferntree Gully, said while she had not yet made up her mind on who to vote for, she would not support Tudge. Her vote will go to the candidate who can promise a better deal for teachers.

“The local member Alan Tudge, he’s the one who was in an extramarital affair wasn’t he? Nah, nah, nah, no thanks. I’m not religious but I’m pretty strong on my values and he was hurting people because of his poor choices.”