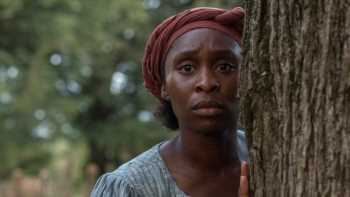 When you see photographs of Harriet Tubman (and many exist), she appears, in an eerie way, to be staring right at us. Her implacable scowl throws down a gauntlet that cuts across the ages. Cynthia Erivo, the British singer and actress who takes on the title role of “Harriet,” nails that thousand-yard glare with a furious and mournful eloquence. She looks just like you’d imagine Harriet Tubman might have looked when she wasn’t staring down a photographer’s lens. As Harriet, Erivo communicates anger and anguish, fear and resolve, all held together by something like possession. (When you regularly commune with God, your eyes might tend to fixate on something beyond the everyday.)

Fleeing from the Maryland plantation on which she was born and raised, “Minty,” as she’s first known, winds up on a bridge suspended over a rushing river, with armed men hemming her in from either side. She takes a leap into the rapids — her smartest strategy, but it’s also a mortal plunge. At that moment, having gotten rid of her spiritual shackles, she would rather be dead than find herself a slave again. (It’s not a choice, it’s an instinct.) The river carries her off, and once she’s alone in the woods, she winds up taking the 100-mile trek all the way up to Pennsylvania, the free state that borders Maryland. As she approaches the state line, bathed in the light from the sunset, she takes a little hop over it, and her face opens into a smile, giving off a momentary glow that lifts you. It may be the only time in the movie she’s completely unburdened.

Harriet Tubman escaped from slavery in 1849, when she was 27, and wound up in Philadelphia, where she could have chosen to settle into, for that time, a (relatively) safe and comfortable existence. But that choice wasn’t in her mental-spiritual vocabulary. She had left her husband, and the rest of her family, and so she went back to get them. She wound up making 13 missions and guiding 70 enslaved people to freedom. She is one of the most heroic individuals in America, and her story is one of the most extraordinary.

“Harriet,” directed and cowritten by Kasi Lemmons (who made “Eve’s Bayou” and the even better “Talk to Me”), captures the heroism — the courageous audacity of Harriet Tubman’s struggle — with surefire directness. Minty, who is subject to fainting spells (the result of one of her masters cracking her head open when she was 13), goes into the wilderness armed with nothing but her wits, and comes out the other side. Rechristening herself Harriet, she turns into a stealth abolitionist, and a leader too, brandishing a pistol that she’s willing, if need be, to turn on her own people (to get them to cross the water they’re scared they’re going to drown in). She’s cautious, but she can also be reckless, because that’s the unprecedented nature of what she’s doing. As the movie goes on, her bravery just grows, to the point that she wields that pistol as if it were part of her.

As a heroine, Harriet Tubman is long overdue on the big screen, and “Harriet” is a conscientiously uplifting, devoted, rock-solid version of her story. Yet when it comes to putting the audience in touch with what’s extraordinary about Harriet Tubman — not just illustrating what she did but letting us connect with it on a moment-to-moment level — “Harriet” is a conventional and rather prosaic piece of filmmaking. I don’t tend to complain much when movies feature generically uplifting musical scores, but the score of “Harriet,” though written by the jazz composer Terence Blanchard, has a surprisingly standard Jerry Goldsmith-meets-Aaron-Copland blandness that, I think, gets in the way of what we’re watching. There are too many scenes where the music is asked to do the movie’s work for it: to create a rush of emotion, when the scenes, as written, should be doing that on their own.

And there’s a crucial way the film could have been more experiential. Since “Harriet,” as a biopic, is long overdue, whenever we’ve heard her story we’ve had to imagine the details of how she made it all that way, evading lethal wildlife and racist white Southern hunters. Theoretically, that should make for a kind of Civil Rights adventure movie. But Harriet’s voyages from the South to the North feel physically under-dramatized. Wouldn’t we want to know, as if we were taking the journey ourselves, what it felt like? But too often Harriet’s odysseys have a tinge of the ‘70s TV-movie generic.

It’s not as if there are a ton of dramas about slavery, but six years ago “12 Years a Slave” was so scaldingly intense in the depths of its agony, the power of its faith, that it’s hard to watch “Harriet” without noticing how much less potent the characterizations are. Joe Alwyn plays Harriet’s most sadistic master, who grew up with her and has to suppress his love for her, to the point that he only talks about slaves with ugly animal metaphors — a completely believable 19th-century racist characterization, but not exactly a resonant one. (Just compare him to the Paul Dano or Michael Fassbender characters in “12 Years a Slave.”) In Philadelphia, Harriet finds a community — the born-in-freedom rooming-house proprietor Marie, played by Janelle Monáe with saucy pride, and the abolitionist William Still (a disarmingly benign Leslie Odom Jr.). The actors hold you, but I wish the characterizations were richer. Even the great Clarke Peters, as Harriet’s father, has a sweet presence but limited impact.

“Harriet” ultimately evolves into a kind of righteous Western action movie, built around the logistics of how to escape a posse of slave hunters. Harriet gets to get good with her gun, and that’s fair enough, since she wound up being one of the only women in the Civil War to lead a military patrol. It’s one more thing about her to be in awe of, and “Harriet” is nothing if not a dutiful and eye-opening salute. But it still leaves you feeling that the great movie about Harriet Tubman has yet to be made.