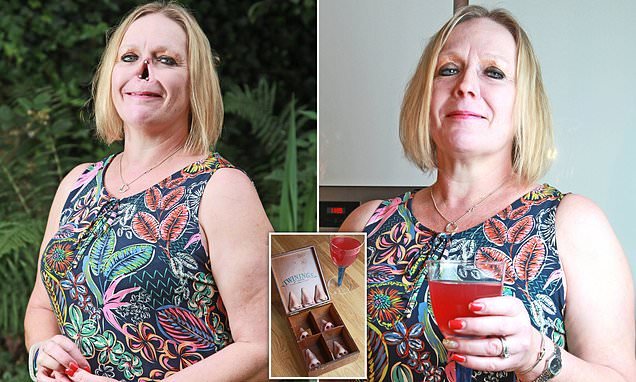 Mother who had her nose removed after an auto-immune disease ravaged her face reveals she’s spent £3,000 on magnetic prosthetics – including a ‘drunk one’ to match her skin when it’s flushed

A mother-of-two who lost her nose to a rare auto-immune disease has revealed how she has spent £3,000 on a collection of magnetic prosthetics.

Jayne Hardman, of Redditch, Worcestershire, was left with no option but to have her nose removed after she was diagnosed with Wegener’s granulomatosis, which caused her nose to collapse and can be deadly if not treated.

She now uses a range of prosthetics that are suited to different skin tones – and most recently one that she has dubbed her ‘drunk’ or ‘summer’ nose to match her face when she is feeling a little flushed. 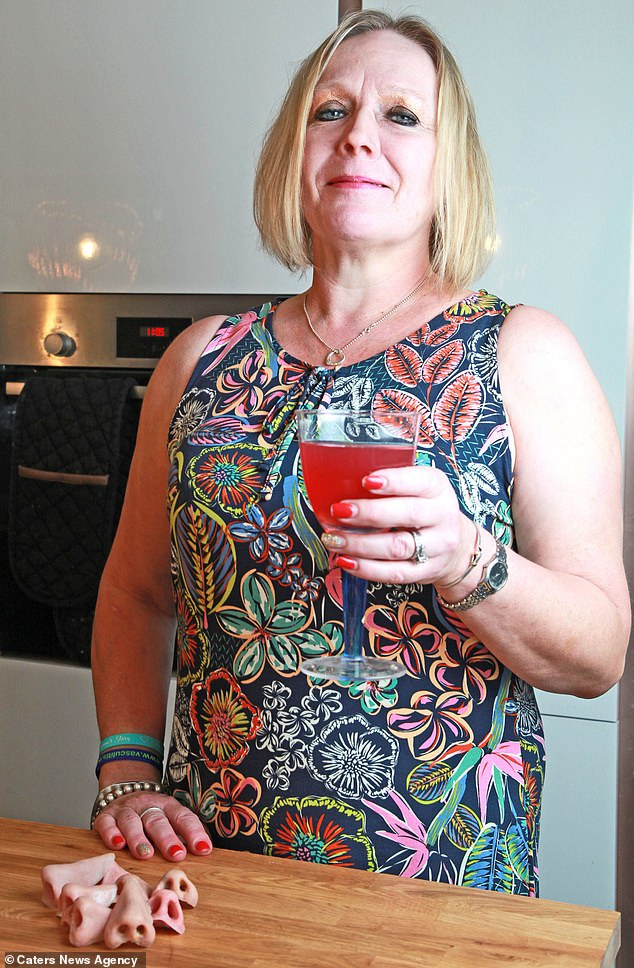 Jayne Hardman (pictured) , 49, from Redditch, Worcestershire, who had her nose amputated after developing Wegener’s granulomastosis, has invested in £3000 in a collection of noses 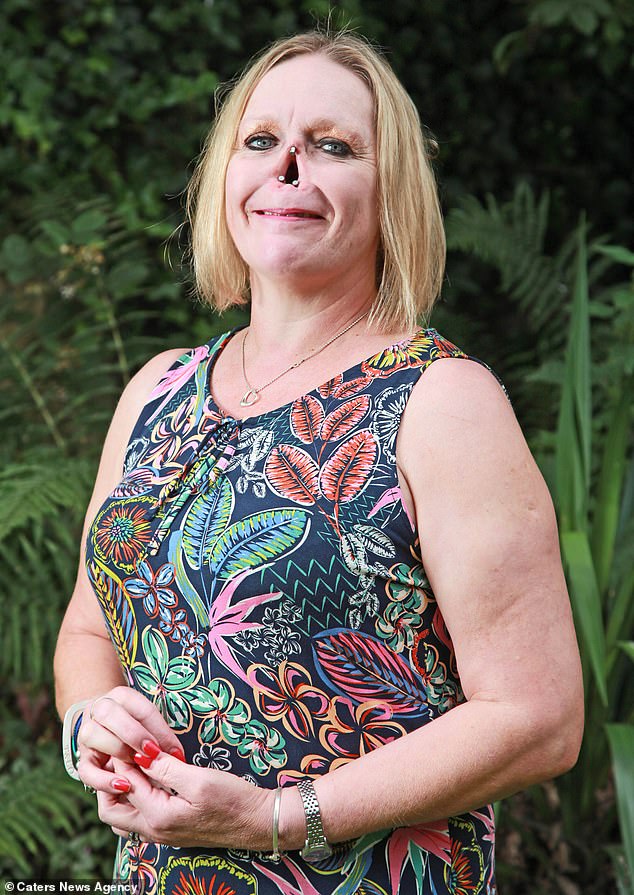 Jayne (pictured) has recently bought a new prosthetic nose to match her skin after getting tipsy, she keeps it in her handbag to put on after having a few drinks 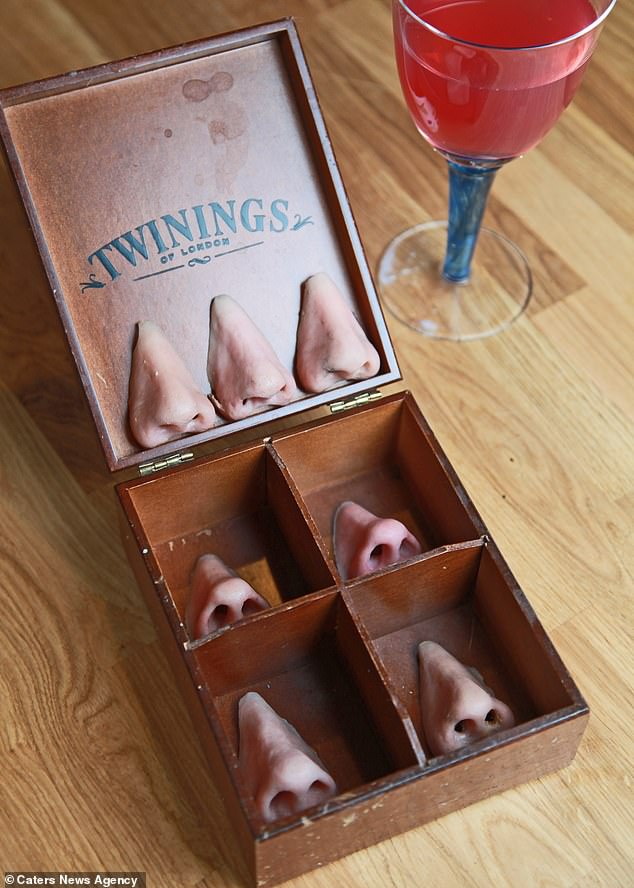 Explaining how the noses are made, Jayne said: ‘They use a little gadget that they put on your face which matches the tone needed for the prosthetic, it’s kind of like highlights.

‘They make it look as life like as possible, and with this new drunk nose, I keep it in my handbag and pop it on after having a few drinks which matches perfectly.’

Jayne had her nose removed in 2017, three years after she was diagnosed with an auto-immune disease following a collision with her pet dog CeCe, a 14st Neapolitan mastiff, that caused her nose to swell and bleed and left her unable to smell.

The traumatic illness Jayne suffers with, known as granulomatosis, can prove fatal if left untreated and saw her undergo gruelling chemotherapy.

Even specialists were initially baffled by her nose swelling, which eventually caved in to such an extent that she would walk with her head down in the street to stop people from staring at her. 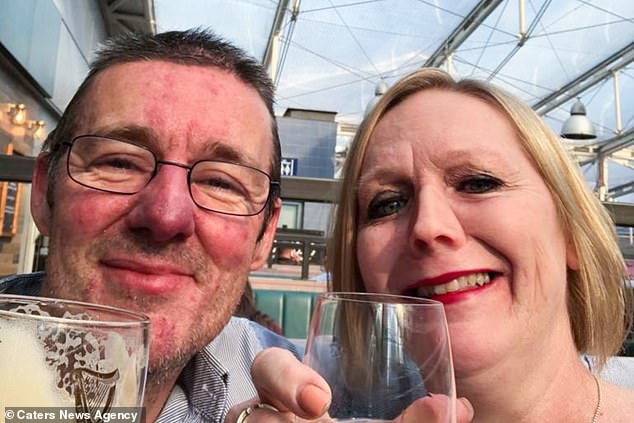 Jayne (pictured right) says without the support of her husband and children, she would’ve most likely ‘topped’ herself when her nose began collapsing from the disease 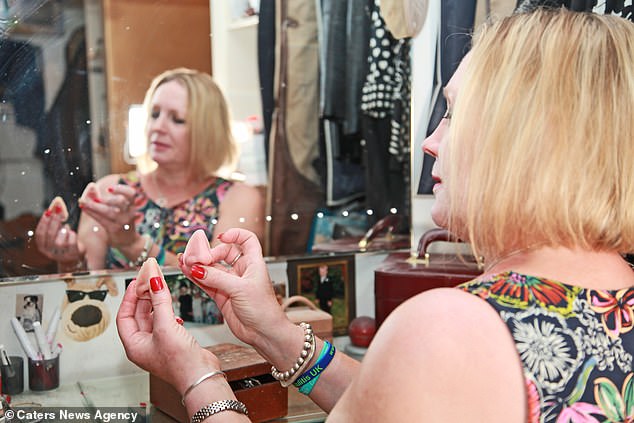 The 49-year-old (pictured) was left with a hole in her skull after her amputation in January 2017, she spent three years unable to leave her house due to people looking at her in horror

Wegener’s granulomastosis, also known as Granulomatosis with Polyangiitis, belongs to a group of diseases characterized by blood vessel inflammation (vasculitis).

The uncommon disease can develop suddenly or over several months, affecting mainly the sinuses, lungs and kidneys, but can also affect the eyes, ears, skin, nerves, joints, nose and other organ.

Wegener’s granulomastosis is a life-threatening disorder that in some instances can cause permanent damage to the body, for example a nose amputation or reconstructive surgery may be needed if the nose collapses.

According to the NHS, the disease is most common in middle age and older people but can develop at any age.

Scientists are unsure about what the exact cause of Wegener’s granulomatosis is – but believe it may be down to a fault in the immune system.

Symptoms often include a blocked or runny nose, tiredness and skin problems such as rashes, lumps and purple spots.

Her nostrils collapsed and, in fear the autoimmune disease would destroy more facial features, doctors had no other choice but to amputate her nose.

Recalling the struggle before having her nose removed – and the prosthetics fitted, Jayne said: ‘I had six years of looking so awful, one of my friends shared a picture of us years ago and my nose was awful, swollen and dented.

‘Now that I look normal and don’t stand out in a crowd, I’m just so thankful for the service my prosthetic has given me.

‘I’m so more appreciative of the natural elements of my body and its empowering now being able to walk around without people stopping their cars to look at me.

‘When I’m out in the sun, or having a drink, sometimes people ask questions about it, but it doesn’t happen as much as you would think.’

Jayne acknowledged she is fortunate to have the support of her husband and children, and said she might have struggled if she had had poor mental health.

‘I probably would have topped myself when my nose started collapsing,’ she admitted.

‘The new nose is amazing; it makes me feel so confident when I’m out – I appreciate that it’s bizarre and I understand when I see people pull faces, but my inner strength has pulled me through this situation for the better.’ 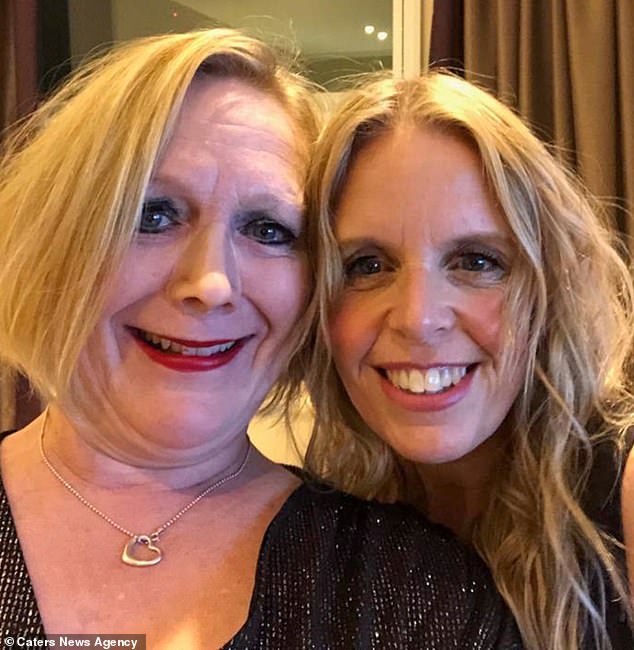 Jayne (pictured left) says once you lose something you start to notice everyone else’s, she likes the appearance of Jennifer Aniston’s nose 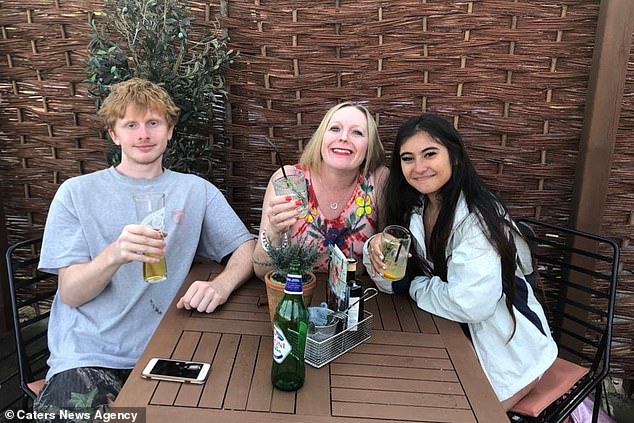 Jayne (pictured centre) remembers having to eat with her mouth open before having her nose removed, as she struggled to breathe

The 49-year-old was left with a hole in her skull but in January 2017, after four prototype prosthetics, she was given a magnetic nose.

Despite spending three years being unable to leave the house due to people looking at her in horror, Jayne has found a new lease of life in her prosthetics.

She said: ‘I can’t begin to explain how happy I am with my new nose, I have my normal nose that I wear day to day, and my drunk nose comes out when I’ve been drinking.

‘Once you lose something you start to notice everyone else’s, Jennifer Aniston has a great nose, and I notice these things because I’ve lost mine.

‘I remember telling the prosthetics that If they’re going to remove my nose, they better be able to replace it with what I want. 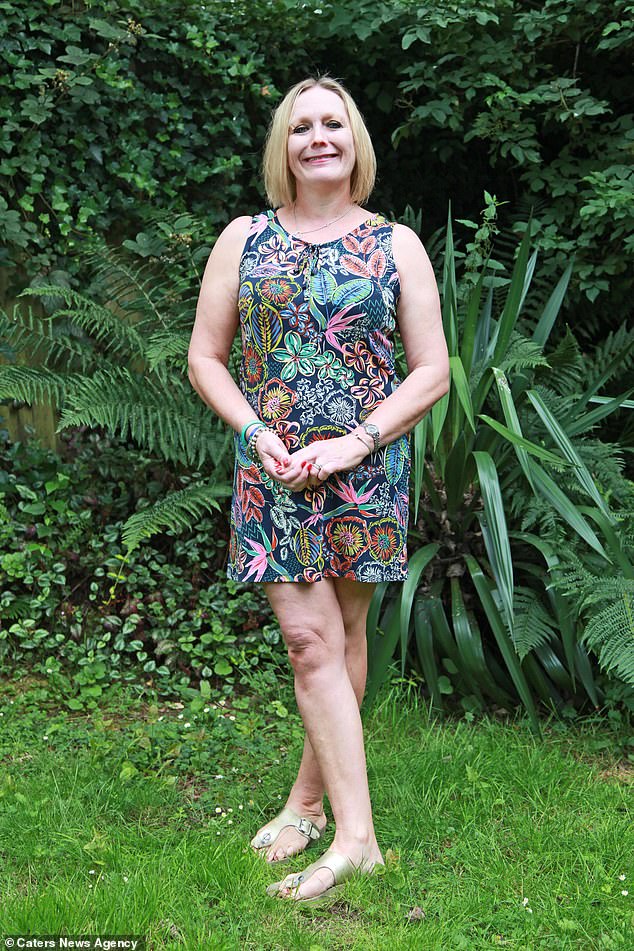 Jayne (pictured) who describes her newest nose as perfect, says the process of having a custom made prosthetic has been life changing

‘Even eating something before was horrible, I had to cover my nose because to breathe my mouth had to be open.

‘You could see people recoiling in horror, stopping traffic to look at me.’

Jayne first had a glue on nose that she hated. She then got a magnetic nose which was considerably better but stood out if worn in weather conditions that didn’t match her body.

When she would go out and become sun burnt or even slightly pink, her nose would still be pale which would make it very noticeable to people looking at her.

She added: ‘This new nose is perfect, it magnets on and I can put it on whenever I need to.

‘I can’t express enough how happy I am, the entire process has been life changing.’