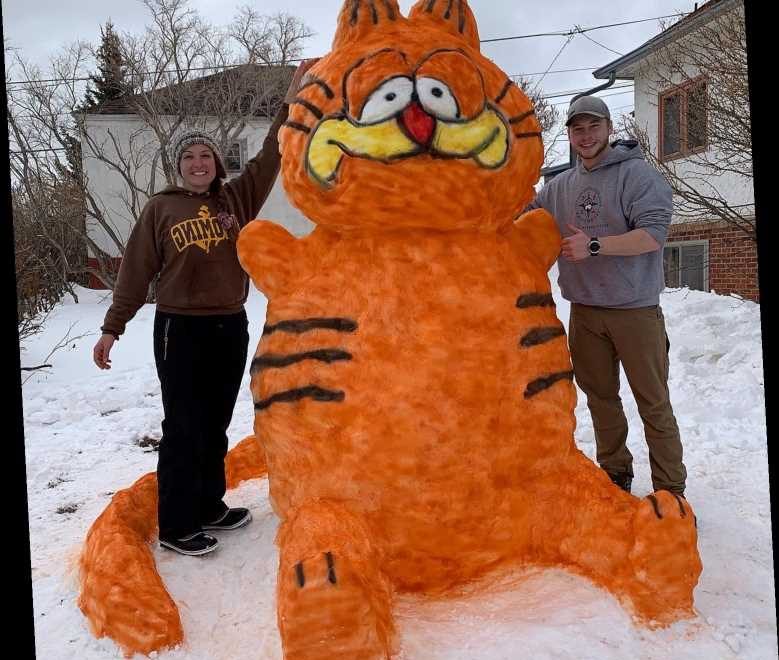 A Wyoming couple is keeping a family tradition alive — and they're spreading joy in the neighborhood while doing it!

Jennifer Hayden and her husband Max Hayden recently created a massive Garfield snow sculpture outside of their home in Laramie, Wyoming, after receiving 20 inches of snow in a storm.

Jennifer, 22, tells PEOPLE (the TV Show!) the fun idea came to her last year after her parents, Jim and Julie Seeman, sculpted identical ones in 1985 and again in 2010.

"It's what my parents have done. They built a snow [sculpture] when they were in college as a young couple," Jennifer explains on Monday's episode. "I don't know what inspired them to do it. I know they had a little Garfield toy, and I assume they liked the character." RELATED: Iowa Family Builds 15-Foot-Tall Snowman in Their Front Yard: 'There Wasn't a Doubt in My Mind'

"Me and my brother and my mom and dad built one as a young family when we lived in Buffalo, Wyoming," she continues. "And I was like, 'That'd be a really fun tradition to carry on with us and then someday in the future with our kids.' "

Max agreed — and soon the couple were out in the snow, sculpting a massive version of the beloved orange cat.

"Normally, you can take snow, and you can roll it into a snowman … and we tried to roll it, and it just didn't work," Jennifer explains. "So we ended up shoveling and scooping it into the Garfield.

Adds Max, 22: "Probably the hardest part was putting the head on, because we built the head separately … we cut the back of the head off to make it lighter. And then we managed to balance that on and we just kind of glued it together with more snow." RELATED: You've Been Building Your Snowmen Wrong: Grab a Garbage Can and a Spatula and Read This

About three hours and one bottle of orange spray paint later — not Cheeto dust, despite popular belief — the 7-foot-tall sculpture was complete.

Jennifer later took to Facebook and posted a side-by-side picture of her and Max's Garfield sculpture with her parents' version.

Soon, she says, the image went viral, accumulating thousands of likes within minutes.

It has since become a neighborhood favorite, with visitors frequently stopping by to see the sculpture in person. "It's crazy because when we built it, we didn't think anything like this would happen," Jennifer admits.

"Everyone was just super in awe, almost, of what we did," says Max. "We work at elementary schools, and it's so great to have our kids, and even other kids outside of our classroom, just come up to us, be like, 'You built the coolest snowman ever.' "

"People are just really happy to see it," he adds.