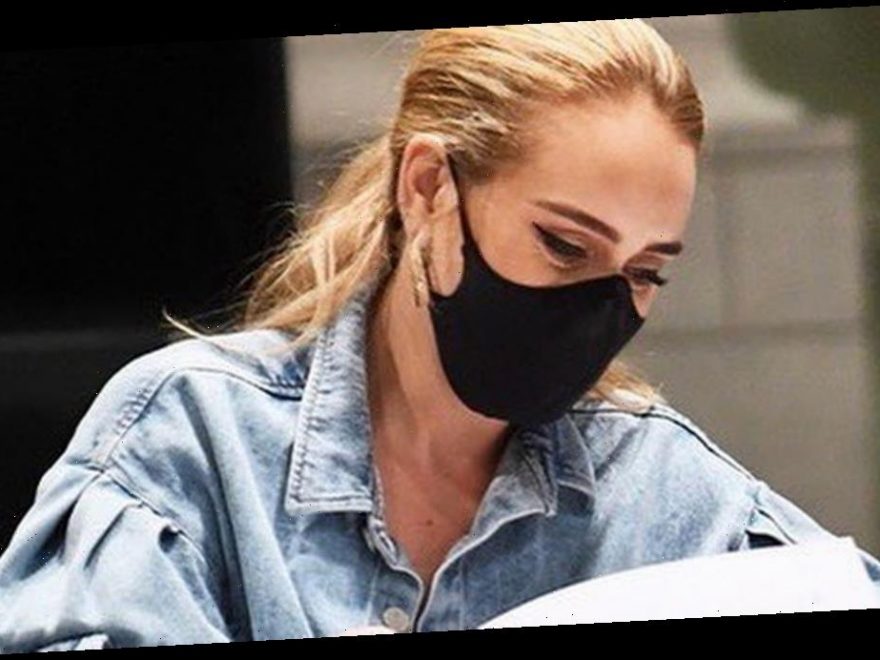 Adele is getting into the full swing of being a television presenter as she shared a snap while going over her script ahead of her Saturday Night Live debut this weekend.

The London-born songstress first appeared on the NBC show almost 12 years ago as a musical guest alongside host Josh Brolin.

She later appeared again in 2015 while promoting her third studio album, alongside Matthew McConaughey who was fronting the episode.

Now, the 32-year old will be taking over presenting duties while H.E.R. performs as the musical guest.

While concentrating on her script, the 15-time Grammy Award winner protected her face with a black face mask as she worked at Manhattan's 30 Rockefeller Plaza, New York.

Captioning her post, she penned: "3 days to go," alongside a black love heart.

Adding a bit of jazz, the mum-of-one wore a pair of brown pointed cowboy boots on her feet.

Despite half of her face being covered, Adele looked sensational as she wore a full face of makeup, with her smokey eyeshadow in sight, with dark eyeliner.

Her luscious honey-coloured locks were scraped back into a loose ponytail that cascaded freely down her back.

Fans couldn't contain their excitement after seeing her post, just 48 hours before she broadcasts live.

One commented: "This is the most excited I've been for anything, ever."

While a second said: "I'm SO excited!"

"We are so glad that you are doing this," exclaimed an Adele fan account.

"Queen, you will kill that live show for sure," penned a fourth.

She sent shockwaves across the showbiz world just one week ago when she announced she would be returning to the stage.

Announcing the news to her 151 million followers, she said: "Bloooooody hellllll I'm so excited about this! And also absolutely terrified! My first-ever hosting gig and for SNL of all things!

"I've always wanted to do it as a stand-alone moment so that I could roll up my sleeves and fully throw myself into it, but the time has never been right. But if there was ever a time for any of us to jump headfirst into the deep end with our eyes closed and hope for the best it's 2020 right?"

She continued: "It'll be almost 12 years to the day that I first appeared on the show, during an election…which went on to break my career in America, so it feels full circle and I just couldn't possibly say no!

"I am beside myself that H.E.R will be the musical guest!! I love her SO much I can't wait to melt into a flaming hot mess when she performs, then confuse myself while I laugh my a**e off in between it all."