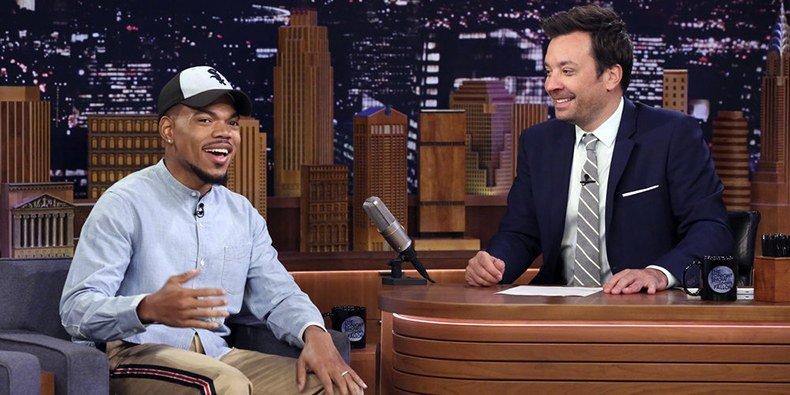 Chance the Rapper’s debut album, The Big Day, is set to arrive July 26th. The rapper went on The Tonight Show to reveal the news to host Jimmy Fallon, who agreed to pre-order the album in return for Chance spilling the title, release date and cover art. The album had previously been available for pre-order with no actual details revealed.

“I haven’t sold my projects before,” Chance explained to the audience. “A lot of my projects were free. This is my debut album, so there’s a pre-order and I told Jimmy to pre-order my album. And he was like, ‘If you say the release date on my show.’”

The Big Day, a follow-up to Chance’s 2016 release Coloring Book, is available for pre-order now for those who want to be like Fallon.

The rapper also played a round of “Box of Lies” with Fallon (spoiler alert: Chance is not a good liar) and revealed that he had a secret role on the new live-action remake of The Lion King. Donald Glover, who voices Simba, tapped the rapper to become a “nostalgia consultant” on the film.

“He contacted me while they were working on it and was like ‘Hey I told Jon Favreau, the director, that you were a huge fan and he wants you to come in as a nostalgia consultant to tell him what ’90s kids like about The Lion King,’” Chance shared. “So that’s what I did.” He added, “It did get me another gig. I did a little bit of slight vocal work on the animated film. You won’t know it’s me. It’s very weird. I do, like, a lot of the background noises. In very small parts, like if you see an antelope grazing or something.”