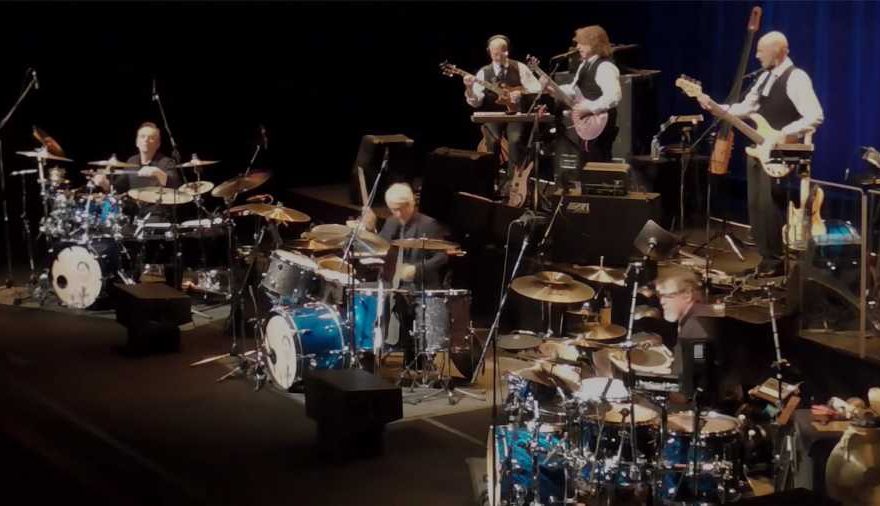 Earlier this month, King Crimson wrapped up not only their 2021 touring cycle with a show at Orchard Hall in Tokyo, but quite possibly their 53-year history. Bandleader Robert Fripp has been hinting for months that the group wasn’t going to continue after they fulfilled all their commitments for the year, and he tweeted that the band went from “sound to silence” after the final notes of last encore “Starless” rang out through the venue.

“Tonight is the final concert of the tour,” bassist Tony Levin wrote in a blog post, which is packed with photos from the night, “and quite possibly the final King Crimson concert.”

This might feel somewhat familiar for Crimson fans since the group also took an indefinite break following their 40th-anniversary tour in 2008. “There are greater necessities for me than pulling new KC music from the air & touring the world to present it to ears that would rather hear an older repertoire (which is pretty fab, may we note),” Fripp wrote in his online diary. “Live KC music of any period would have value, but I doubt it would shape the contemporary musical debate. A grief of expectations, conventionality, conflicting demands — a younger Fripp would have dealt with it, and suffered. An older Fripp chooses his suffering more carefully.”

An even older Fripp had a change of heart in 2013 when he put together a new incarnation of Crimson that featured, among many other excellent players, three drummers and early-Seventies saxophonist Mel Collins. “To be honest, none of us thought it was going to work,” Collins told Rolling Stone earlier this year. “And the idea of drummers being in front of the stage as opposed to the back … We were like, ‘How is this going to possibly work?’ “

Having the drummers in the front of stage was indeed a very unusual call, but Fripp’s vision somehow worked, and the reconstituted band toured steadily for years. Ticket sales were surely helped by Fripp’s decision to finally play the group’s early classics like “In the Court of the Crimson King” and “21st Century Schizoid Man” after decades of resistance. Here’s video of them playing the latter song at a 2015 gig in Japan. (And click here for an amazing, in-depth article about that song.)

Crimson played 38 shows this year, including a two-month American slog where they traveled the country by bus and had precious few nights off. When we caught up with Mel Collins midway through it, he had just driven 13 hours from Sandy City, Utah, to Concord, California.

“It’s not the most comfortable thing to be sleeping in a bunk driving along a motorway with the engine and the bumps and everything,” he said. “You do the best you can, really. But it’s pretty grueling this tour. We’re pretty tired.”

That exhaustion may explain why Fripp is saying the band is going back into hibernation. Before we label King Crimson dead forever, let’s see how he feels after having a year or two off. After all, we’re just a little over six years from the band’s 60th anniversary. Will he really let that pass without yet another comeback tour?