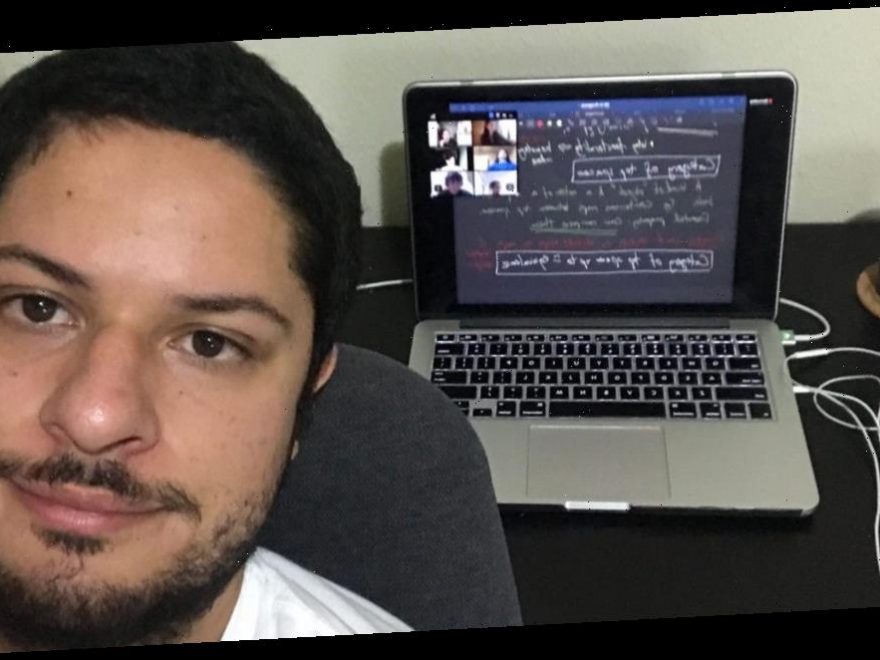 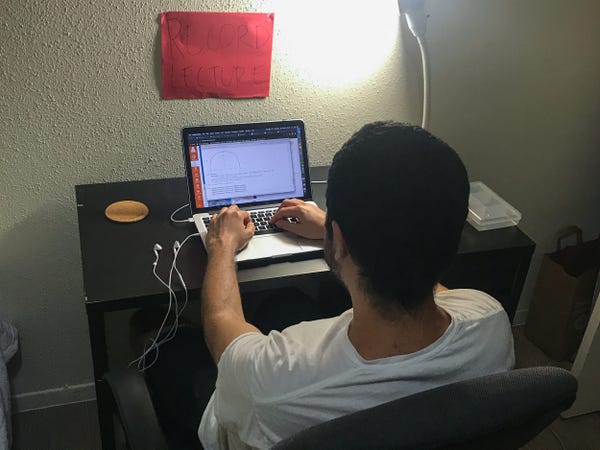 Rodrigo Castillo Vasquez misses strolling into his friends' offices in the physics library just to chat. He used to spend at least a half-hour a day hanging out and making connections on campus.

"I miss being with friends and any kind of in-person contact or conversation," he said in an interview with Business Insider. "What I don't miss is noisy or crowded areas, which is pretty common on a campus such as the UT campus."

A 27-year-old graduate student at the University of Texas at Austin (UT Austin), Vasquez, studies physics. Before beginning the program at UT Austin, Vasquez obtained a bachelor's degree in physics in Guatemala, his home country. In 2016, he went to Italy to study theoretical physics for a year.

Vasquez has lived in Austin for the last two years since beginning his Ph.D. program. For the first year and a half, he attended courses in person. UT Austin reopened with a combination of hybrid, in-person, and online classes in August.

Vasquez's classes are conducted over Zoom and Canvas, an online education platform where students and professors can upload assignments.

"I find it harder than taking in-person classes," Vasquez said of online coursework. "There are more distractions and the lack of personal contact with others is also hard, I think especially for me as a Latin American."

Vasquez added that it helps that all the lectures are recorded. Here's what a typical school day is like for Vasquez, now that he's studying from home.

Rodrigo Castillo Vasquez is a Ph.D. physics student at The University of Texas from Guatemala. 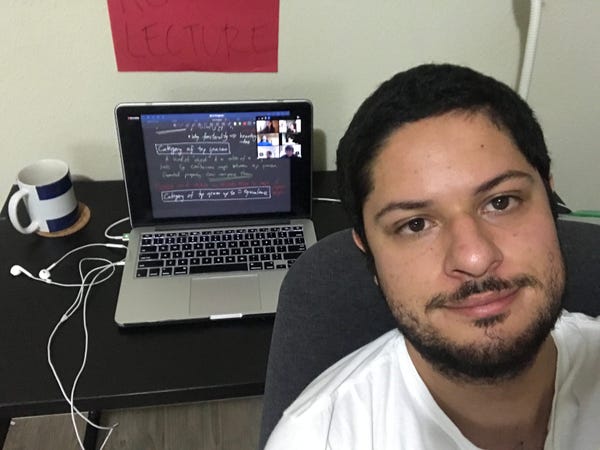 This semester, Vasquez is enrolled in two classes. One takes place on Monday, Wednesday, and Friday mornings and the other doesn't have a fixed meeting time. Aside from these classes, Vasquez participates in research group meetings and extracurricular activities like clubs.

Vasquez is involved in research clubs and a mentoring program where he guides an undergraduate physics student.

Vasquez wakes up at about 8 a.m. on weekday mornings in his bedroom in Austin, Texas. 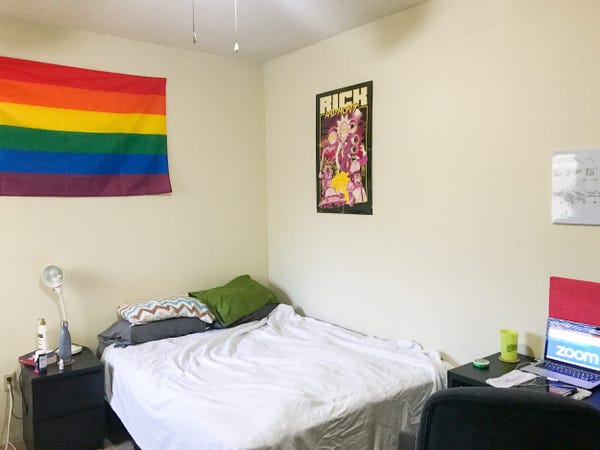 Vasquez sleeps and works in the same room. His work desk is right next to his bed. Vasquez told Business Insider he checks the weather and WhatsApp, a messaging platform, as soon as he wakes up.

Vasquez recently deleted the Instagram app off of his phone because he found it too distracting from his studies. 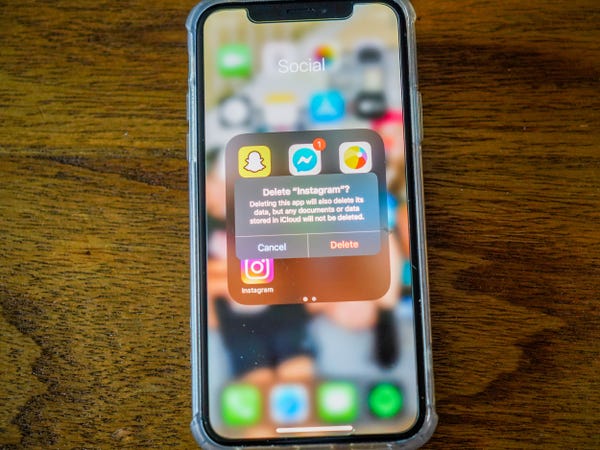 "I used to check Instagram — that's the only social networking app I had on my phone — but I deleted the app just to avoid extra distractions," Vasquez told Business Insider.

He said that when studying from home, it can be harder to focus.

After checking his phone for updates, it's time for Vasquez to rise.

"I usually stay in bed for like five more minutes and find the determination to stand up," he added.

After he washes his face, Vasquez heads into his shared kitchen space to make breakfast. 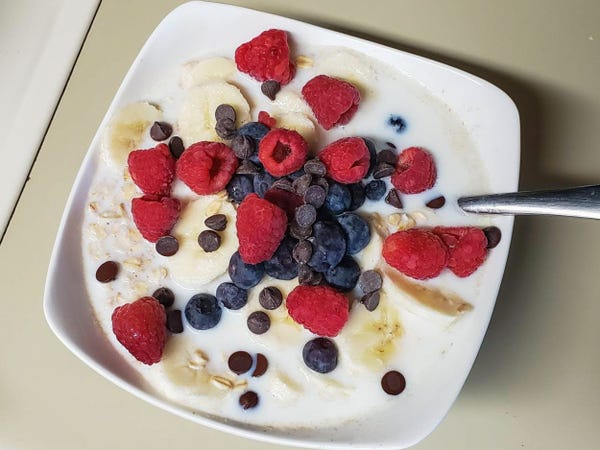 Vasquez prepares a simple breakfast, like cereal or blueberries with yogurt, and watches Netflix or Disney Plus while he eats.

"I avoid things like reading the news or checking my mail just because I take that time for myself to be calm," he added.

He lives in an apartment with another student in his program from Guatemala.

"I actually know him from several years ago," Vasquez told Business Insider. "We went to high school together."

While Vasquez and his roommate are in the same physics program, they are in different classes and research groups.

"We let each other know if we have any meeting or class so we know when we can't interrupt the other person or knock on their door or whatever," Vasquez added.

Before heading back to his room at around 8:40 a.m., Vasquez makes a cup of coffee.

"I bring my coffee to my desk and I start checking my email or Twitter just to see what's up with people and news and things like that," Vasquez said.

After taking a shower and preparing for class, Vasquez reviews the class material before his 10 a.m. lecture. 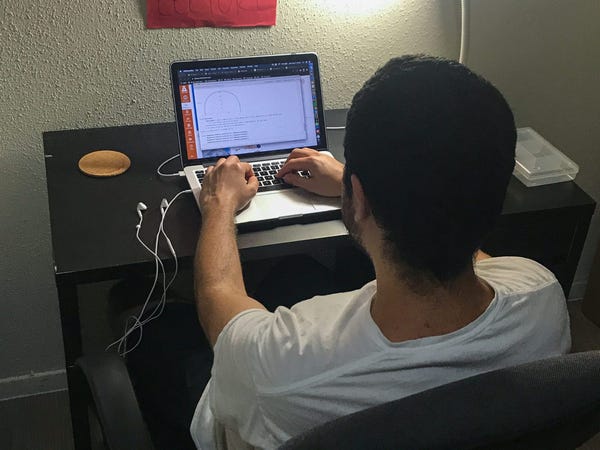 If he has some time before class, Vasquez checks to see if there is homework due or if he has any questions for the professor about the material. 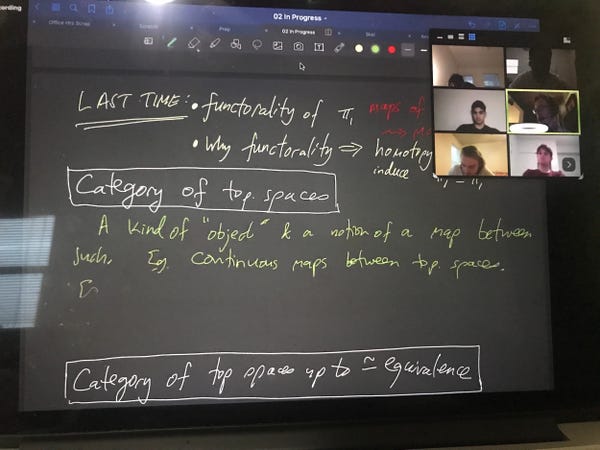 "It's basically about taking figures and shaping them in different ways, and in terms of mathematical language, trying to describe these changes," he told Business Insider.

Vasquez has to look up the meeting ID to enter the lecture. Then he turns on his camera, but not his mic.

"I don't turn on the mic unless I have a question or comment at any point during the lecture," he added.

Vasquez takes notes during lectures on his tablet. 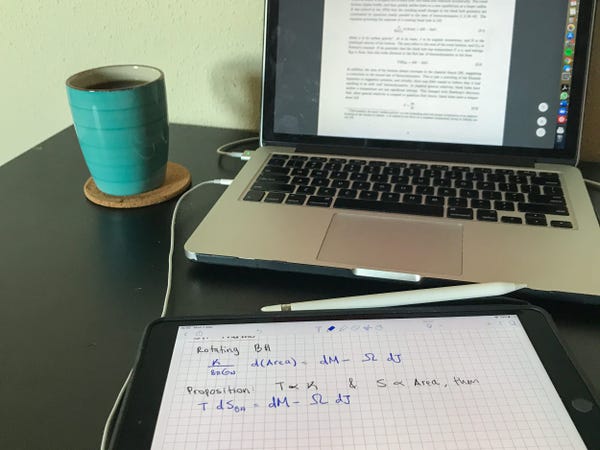 During the lecture, Vasquez says students have the option to "symbolically" raise their hands.

"The professor prefers it this way. He's usually looking down because he also using a tablet as a whiteboard," Vasquez told Business Insider. "I think he gets a notification whenever someone uses this option and when he notices that he calls on you."

Vasquez says he experiences Zoom fatigue, which is similar to burnout.

"I am working with my therapist on self-care techniques to take breaks, clear my mind, relax, and just take some time for myself during the day," he added.

After his lecture ends, Vasquez might have an extracurricular meeting or he may have work to do for his other class — experimental physics. 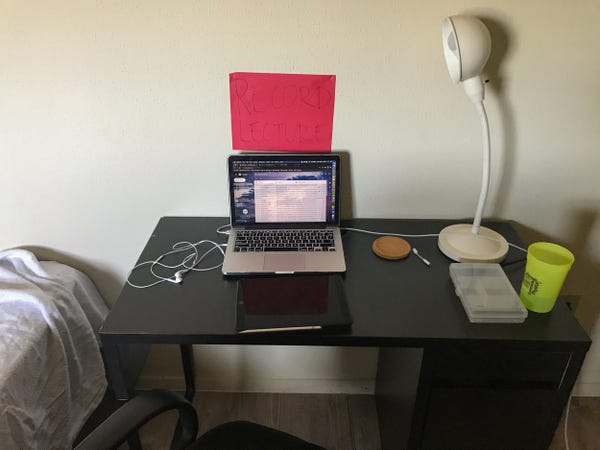 Around noon, Vasquez switches gears to either homework or research.

He may have homework for his other class, where he analyzes data for an experimental physics group.

"It doesn't have a fixed schedule because they send over the data whenever they have it, and it's up to me how I do it," Vasquez added.

At around 1:30 p.m., Vasquez goes back to the kitchen to prepare lunch. 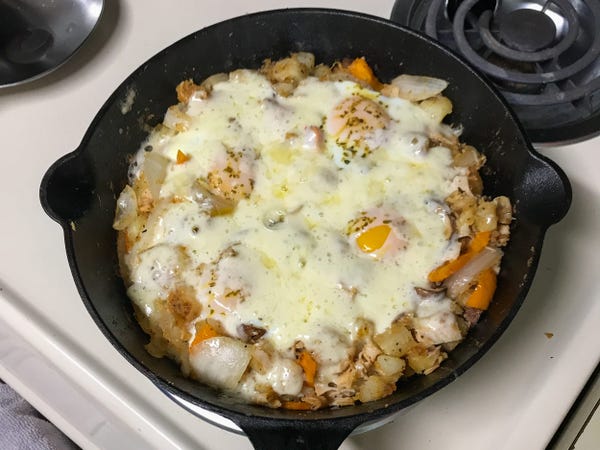 A typical lunch for Vasquez is chicken or another protein combined with bread or rice and vegetables.

In the afternoon, Vasquez usually has extracurricular meetings and activities. 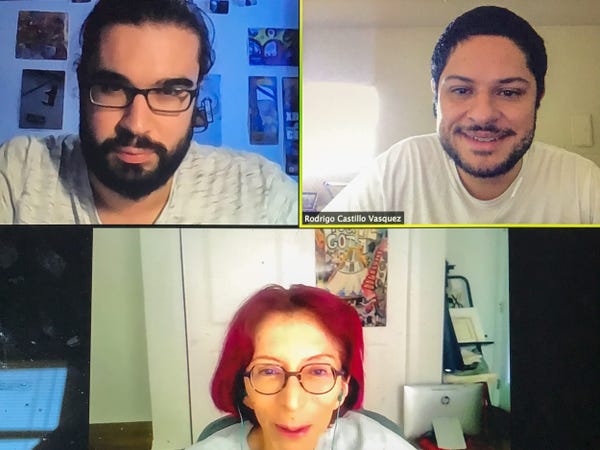 In Vasquez's journal club, one member picks a recent research paper and gives an informal presentation on it.

"When it was in person, we used the chalkboard, but now people usually have some slides ready to talk about these papers," he explained.

Vasquez also engages in a seminar that includes other research groups with more formal presentations.

Brown Bag is another extracurricular activity Vasquez participates in. He said it's really similar to the journal club, "except it's not about someone else's research — it's about your own research" he added.

Once a week on Wednesday's, Vasquez mentors an undergraduate physics student.

"Each week they have reading assignments to complete," Vasquez told Business Insider. "They have to tell me about what they read and try to use their own words in order to describe information."

At around 7:30, Vasquez goes for a run or walk. He has been doing this since April. 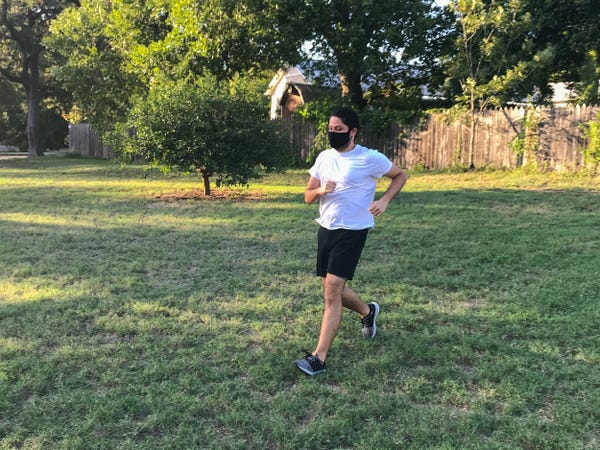 Then he takes another shower.

A couple of times a week, Vasquez will spend his evening on a Zoom call with his friends. 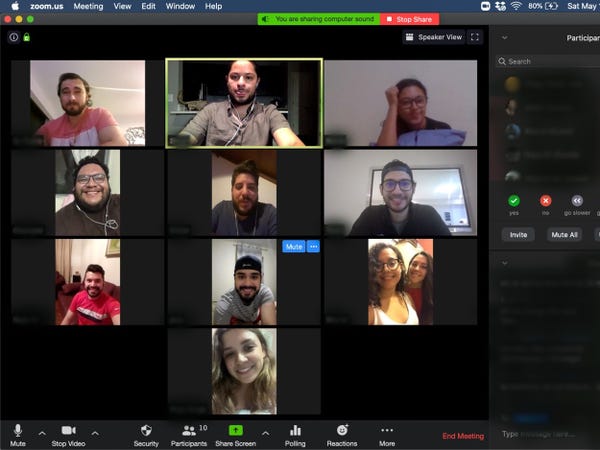 "I have contact with very few people right now compared to the number of people that I interacted with on campus," Vasquez told Business Insider.

To wind down at the end of a workday, Vasquez plays virtual solitaire before going to sleep. 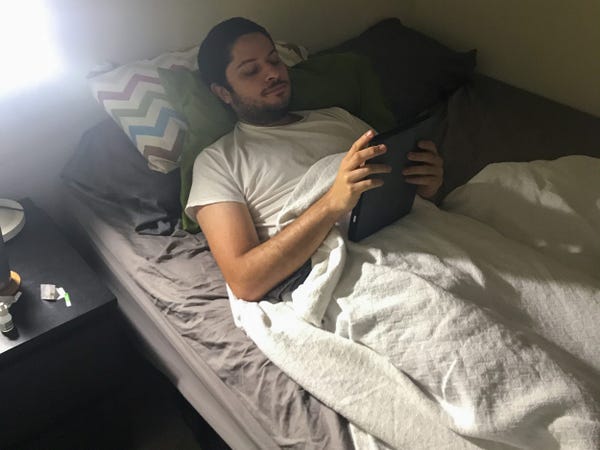 Vasquez said he tries to keep his working time under eight hours each day, but it varies depending on what he has to do that week.