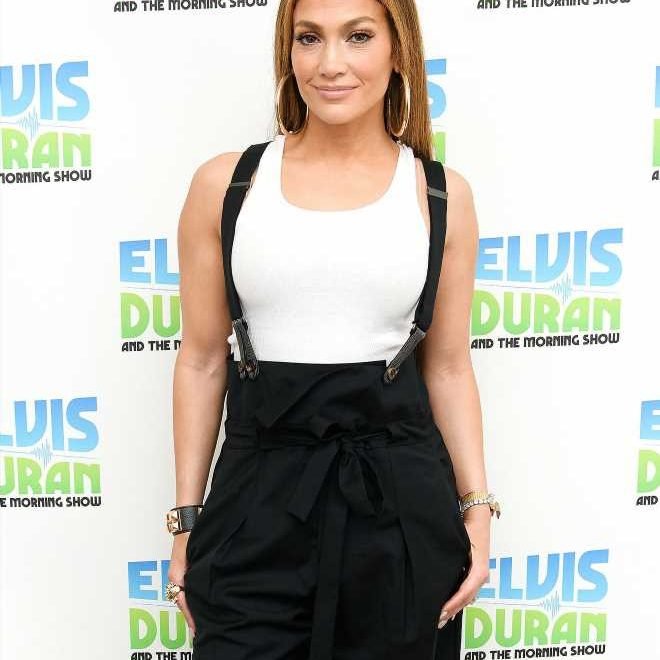 Jennifer Lopez is stepping into a new decade the way she does most things: fabulously.

The star celebrated her 50th birthday on July 24 with a lavish star-studded Miami bash surrounded by family, including her fiancé, Alex Rodriguez, 44, twins Max and Emme, 11 (whom she shares with ex-husband Marc Anthony) and Rodriguez’s daughters Natasha, 14, and Ella, 11 (whom he shares with ex-wife Cynthia Scurtis).

“For Jennifer, turning 50 is something she is embracing,” a source close to Lopez tells PEOPLE in this week’s issue, on newsstands Friday. “She is in the best place in so many ways. Her family is doing well, her career is still fun for her and she is very excited about planning her wedding to Alex.”

According to the source, Lopez’s birthday was an “all-day celebration.”

“Her kids sang to her in the morning and they had a celebration at home,” the source says. “She was super excited about her birthday celebration.”

Later that day, Lopez took over Gloria and Emilio Estefan’s sprawling Star Island estate for her extravagant fête, which had a gold theme to toast her half-century mark.

“It was actually epic — it was a real friends and family thing,” a source inside the party told PEOPLE. “It was like the closest people in her life and you could tell by the way she said hello to everyone that it wasn’t work.”

Lopez arrived to the bash around 9 p.m. sporting a sexy, metallic cut-out Versace dress with a high slit along the leg. She topped off her birthday look with a high ponytail and large hoop earrings. Fiancé Alex Rodriguez — who gifted her a red Porsche for her milestone celebration — wore a dapper black suit and tie.

A sit-down dinner with assigned seating kicked off the night, and the food was served buffet-style (with a huge caviar bar open for the taking!).

“Right before the buffet stations opened, Alex made a toast,” said the source. “He thanked the Estefans for having them and said how proud he is of Jennifer on this tour.”

“After dinner, everybody moved to the dance floor portion of the tent and encircled it,” the source continued. “The cast of her [“It’s My Party”] tour performed medleys and montages of her songs, and she watched with Alex and her kids and her mom. Then there was a fireworks show over the water.”

At the party, DJ Cassidy — who previously DJed at Lopez’s 40th birthday party — and DJ Don Hot spun tunes for a dancing crowd, stopping only for the presentation of Lopez’s massive, gold and black birthday cake. Decorated with white and yellow flowers, sparklers, rhinestones and shiny fleur-de-lis, the 10-tier creation took four men to carry it out on the floor. “It must have been a 12-foot tall cake,” estimated the source.

Lopez and the former Yankees star, 44, shared a sweet smooch in front of the cake, drinks in hand, before it was cut and served.

After cake, the DJ started playing 50 Cent’s “In Da Club.”

Helping Lopez celebrate at the Estefan’s home were fellow musicians. The star got a solo performance from pal Pia Toscano who sang “Don’t Rain on My Parade” and later DJ Khaled, Fat Joe and Ashanti, all jumped on stage soon after and spontaneously performed some of their biggest hits, including “What’s Luv?,” “All the Way Up” and DJ Khaled’s “All I Do Is Win.”

According to the source, “That whole performance was when [Lopez] went crazy. And when they played her song that DJ Khaled is on, ‘Dinero,’ her dancers picked her up on their shoulders and she sang along. The DJ and all the music she loves was a major part of the party.”

Rodriguez shared video of the moment Lopez danced to “All the Way Up” at the DJ booth to his Instagram with the caption, “TONIGHT was a Jenny from the Block party, and we took it from the Bronx all the way to the 305!!!”

Lopez and Rodriguez stayed at the party and danced until 3 a.m., said the source. Rodriguez refused to be out-danced by his dancing queen fiancé, taking his jacket off and opening his shirt to get a little extra wiggle room.

“They were some of the last to leave,” said the source.

In an Instagram video he shared on July 26, Rodriguez explained to his 3 million followers that he was feeling the pain following Lopez’s birthday bash.

“Jennifer’s done 28 shows in about 58 days,” Rodriguez said to the camera. “She has two more here domestically here in Miami. Last night for her birthday, it was a big one, it was 50. I danced for about an hour and seven minutes.”

“I couldn’t get out of my bed tonight,” he continued. “I’ve iced. I’ve done chiro. I got stretched. I got a massage. Steam. Sauna. I’ve been drinking coffee all day. I’m a mess. She went out there and destroyed it in Miami. Killed it, like if she slept 10 hours. Am I the only one that can’t recover anymore? Does it suck to get old or what?”

Rodriguez added in the caption of the video, “Who else hates getting old?!”

Well, certainly not Lopez. The weekend following her birthday, she went on to perform three shows at Miami’s American Airlines Arena.

“Few people have as much energy and enthusiasm as Jennifer does,” the source tells PEOPLE. “Turning 50 is definitely not going to slow her down.”

Now that her “It’s My Party: The Live Celebration” tour has come to a close, Lopez has a bit of a break before she hits the road again in August.

“She has a few abroad shows in August, but then they are doing a family vacation with the kids before it’s back to school,” the source says.